The culture jamming activist group The Yes Men have struck again. Earlier this week, members of the group spoke at the Homeland Security Congress posing as U.S. government officials. At the conference, they announced a fictitious new U.S. government plan called “American Renewable Clean-Energy Network” to convert the United States to 100 percent renewable energy by 2030. After the announcement, The Yes Men and indigenous activists led the audience in a large circle dance to celebrate the fictitious plan. We air excerpts from their action, including the speeches delivered by “Benedict Waterman,” undersecretary of policy implementation at the U.S. Department of Energy, and “Bana Slowhorse,” a Bureau of Indian Affairs official with the “Wannabe Tribe.” The group joins us in studio to talk about their action. Mike Bonanno and Andy Bichlbaum are two members of The Yes Men, and Gitz Crazyboy is an activist fighting tar sands extraction in his Native lands.

Web ExclusiveMay 02, 2014Extended Interview with The Yes Men on “Operation Second Thanks”

JUAN GONZÁLEZ: And, yes, The Yes Men have struck again. Earlier this week, members of the activist group spoke at the Homeland Security Congress posing as U.S. government officials. At the conference, they announced a fictitious new U.S. government plan called American Renewable Clean-Energy Network to convert the United States to 100 percent renewable energy by 2030. This is a member of The Yes Men who identified himself as Benedict Waterman, undersecretary of policy implementation at the U.S. Department of Energy.

BENEDICT WATERMAN: Thank you very much. It’s a great pleasure to be here and an honor to be making this announcement here. On behalf of the Department of Energy, I’m very excited to announce today a great new plan. It’s beginning a process that will do nothing less than convert the United States’ energy grid into one that’s powered entirely by renewable sources. We’re going to do it in only slightly more time than it took to win World War II.

American Renewable Clean-Energy Network, AmeriCAN, is part of President Obama’s Climate Change Action Plan. It will put ownership of energy production directly in the hands of small companies, local entities and entrepreneurs like yourselves. The U.S. currently generates around 10 percent of our energy from renewable sources, placing us 113th in the world. By 2030, America will produce 100 percent of our energy from renewables, establishing us once again as a beacon of innovation and progress and as a global leader in confronting the supreme challenge of climate change.

AMY GOODMAN: That was Gitz Crazyboy posing as an official from the Bureau of Indian Affairs at the Homeland Security Congress. He’s actually an indigenous tar sands activist. After The Yes Men spoke, they led the crowd in a line dance.

AMY GOODMAN: Well, to find out more, we’re joined right now by three guests. Gitz Crazyboy, who we just heard from him in the tape posing as an official from the Bureau of Indian Affairs, actually an indigenous tar sands activist. Andy Bichlbaum is with us, of The Yes Men. He posed as Benedict Waterman, an undersecretary of policy implementation at U.S. Department of Energy. And Mike Bonanno, member of The Yes Men, played the assistant to Benedict Waterman. We only have 30 seconds, but this congress, the Homeland Security Congress, what is it?

ANDY BICHLBAUM: This is a Congress that is about contractors who want to get government contracts to do usually things like fortify the border or, you know, other homeland security issues. They pay a lot of money to go, and we got in and gave an announcement that the U.S. was going to convert to entirely renewable energy by 2030. This was the Department of Energy—I was from the Department of Energy, and I announced the sweeping plan, teaming up with the Department of Defense and the Bureau of Indian Affairs, to convert the entire U.S. to renewable energy by 2030, which is entirely feasible. And everybody was thrilled.

JUAN GONZÁLEZ: And they believed you.

ANDY BICHLBAUM: They—yeah, believe it or not, they believed me. This—this didn’t dissuade them.

AMY GOODMAN: The congress—this National Homeland Security Congress has lobbyists, military contractors, and they believed you.

AMY GOODMAN: And they danced with you.

ANDY BICHLBAUM: And they danced with us.

GITZ CRAZYBOY: In celebration, they danced.

Watch Part 2 of this interview.

That does it for today’s show. I’ll be speaking tonight at Dartmouth, 5:00 at Moore Hall. Check our website at democracynow.org. 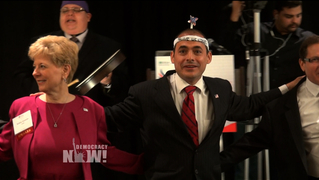