Seattle made history this week by passing the $15-an-hour minimum wage — the highest rate in the country for a major city, and more than twice the federal minimum. The raise will be phased in over time. Seattle businesses will have three to seven years to implement it, depending on their size. The plan also includes several loopholes for businesses, which were fought until the last minute by Seattle City Councilmember Kshama Sawant, the first Socialist to be elected to the council in a century. Sawant ran for City Council last year on a platform of raising the minimum wage to $15 an hour. She joins us from Seattle.

JUAN GONZÁLEZ: The $15-an-hour minimum wage, once a far-off dream, could soon spread across the United States with debates underway from San Francisco to Chicago to New York City. All are watching Seattle, which made history this week by passing the $15-an-hour minimum wage. It’s the highest rate in the country for a major city and more than twice the federal minimum.

AMY GOODMAN: The raise will be phased in over time. Seattle businesses will have three to seven years to implement it, depending on their size. The plan also includes several loopholes for businesses, which were fought until the last minute by Seattle City Councilmember Kshama Sawant, the first Socialist to join the Council in a century. This was the scene Monday as workers and allies packed the City Council chamber to watch the minimum wage hike pass unanimously.

CROWD: We are unstoppable! We made 15 possible!

CROWD: We are unstoppable! We made 15 possible!

CITY COUNCIL MEMBER: The bill passes, and the chair signed it. Now on agenda item number two, Resolution 31524. All in favor of adopting the resolution, indicate by saying aye.

AMY GOODMAN: Workers and activists chanting Kshama Sawant’s name after the City Council passed the $15-an-hour minimum wage. She ran for City Council last year on a platform of raising the minimum wage to $15 an hour.

To talk more about the campaign, she is here with us. The Socialist City Councilmember of Seattle, Kshama Sawant, is joining us from Seattle.

Welcome to Democracy Now! Talk about the significance of this moment in Seattle.

KSHAMA SAWANT: This is an absolutely historic moment, not only for Seattle, but for working people all over the nation, and even globally. What we won here is the possibility for 100,000 workers, low-wage workers in Seattle, to be lifted out of poverty over the next 10 years. And it signifies a transfer of income of $3 billion from the richest in the city to the bottom-most workers, you know, the workers who make the city run. I would urge everybody to see what a reversal of fortune this is, because for the last several decades it’s been a systematic gushing up of income and wealth from the bottom to the top. And this is one of the first really big fightback against the status quo of income inequality and a race to the bottom for ordinary working people.

It’s also significant in the speed with which we achieved it. You know, I took office as a Socialist, as a voice for the working class, only on January 6th. A week later, we had launched the 15 Now grassroots campaign, which has been part of the backbone of the mass movement in Seattle that won this.

It’s also historically significant—and I think this is the most important thing people should take away from Seattle—is that the establishment, the politicians and the businesses, they are not going to be on your side. Working people have to build our own power, our own strength from below. And the reason we won this in Seattle is not because the establishment politicians or the mayor were pushing for this. You know, what happened was they were pressured to the point that they could not ignore it, and 15 became the top of the agenda. But really, the push for this, the real lifeblood of this movement, has been workers, the labor movement, Socialist Alternative, 15 Now, and having a real fighting voice in City Hall.

JUAN GONZÁLEZ: Well, Kshama Sawant, when—last month, when Seattle’s mayor, Ed Murray, unveiled his plan to phase in a $15-an-hour minimum wage, you criticized it as flawed. I want to play your comments on Huffington Post Live.

KSHAMA SAWANT: It has several components that actually are on the big business wish list. A four-year phase-in for big business? Why does McDonald’s need four years to bring their workers out of poverty? Let the CEO of Starbucks, let the CEO of McDonald’s come to City Council and justify why they need to keep their workers one day longer in poverty. There’s an 11-year phase-in for other businesses? Every year of phase-in is another year that a worker has to live in poverty.

JUAN GONZÁLEZ: Can you talk to us about how you came to support the current plan, the form that it finally took?

KSHAMA SAWANT: Yes, absolutely. I think it’s very important to clarify that, you know, as a Socialist, as a fighter for the interests of the working class, I will fight every inch of the way. You know, we should be doing that. We should be fighting until the last hour. But every gain that we can get has to be wrested, wrenched from the hands of the ruling elite, from the corporate politicians and the businesses that they represent. And so, even a small raise in a standard of living is something worth fighting for, and we should grab it as much as we can.

And at the end of the day, the lesson that this shows, you know, the fact that corporations were able to get their loopholes passed shows that we need to build an even more powerful mass movement everywhere around the nation, so that we are strong enough to fight against corporate loopholes. You know, the outcomes of social struggle are a function of the balance of forces. So, the moral of the story is not that, well, we can’t win. The moral of the story is we won a huge victory for the working class. But if we want to fight against corporations, then the only way to do it is to build mass movements.

I just wanted to give you an example of what this means, you know, what it means to build a mass movement, and why is that necessary. You know, the City Council, full of Democratic Party politicians, passed unanimously $15 an hour, which is fantastic. It’s a step—it’s a huge step forward. But less than 24 hours later, the Council has been voting—and I’m holding up this headline from The Seattle Times this morning, which talks about how the highest-paid city-employed executive, who is the head of the publicly owned electricity company, who already is paid $245,000, according to a vote yesterday, is on his way to get more than $350,000. And it shows you that the fundamental shift that is happening is happening from the ground, from the Occupy movement, from workers and from activists themselves rejecting income inequality, rejecting the corporate agenda of capitalism. And we have to keep doing this in a bigger way, because the moment we take our eye off the ball, the same body, elected body, that passed 15 is, you know, brazenly going forward and talking about a huge pay increase for the person who is already the highest-paid executive. So, you know, what we have to learn from this is that we cannot rely on the establishment. And we have to set our sights higher. How did Seattle win this? An important component of this was having a fighting voice for ourselves in City Hall through Socialist Alternative.

And I think that this needs to be done in many other cities. The Chicago Teachers Union should run their own independent left candidate as a defiant challenge, as an insurgent, audacious challenge to Rahm Emanuel’s Democratic Party establishment in Chicago. We need to do more of these things. And I would urge anybody who is inspired by watching this, by what we’ve done in Seattle, please, go to 15now.org. First, make a financial contribution, because grassroots efforts need grassroots support. And then try to get involved. You know, maybe there’s a 15 Now chapter that has been—that has sprung up in your city. See if there is a left organization that can build on our success.

And ultimately, I think we need to raise our sights even higher, start talking about what the working class needs in terms of an independent political representation, an independent political party to represent our interests for the working class. We cannot rely on the Democrats and Republicans. The discussion that you had in the previous segment about war and what it is doing to our veterans, you know, is a really great example of how completely dysfunctional and rotten this two-party system is and why we need to break from it.

AMY GOODMAN: Well, Kshama Sawant, we want to thank you very much for being with us, the first citywide Socialist elected member of the City Council. I think you have to go back to 1916 to a Socialist head of the—Socialist member of the city of Seattle School Board. She is a member of the Socialist Alternative, a teacher, economist and a union activist. We’re going to end this segment with the words of a worker from Target who spoke ahead of Monday’s Seattle City Council meeting, among those who went on strike May 15th on the global day of protest for low-wage workers.

RIHANNA MARTINSON: Hi, I am Rihanna Martinson. I’m a worker at Target. I make about $9.61 an hour right now, and I work very, very hard for it. What 15 means is that workers like me are able to afford basic necessities. I mean, rising housing costs are only part of the problem. Things like healthcare, things like being able to afford new shoes before our shoes fall apart, being able to go to the dentist if we get a cavity, without worrying about it completely destroying our lives. I’m worried that my mother right now is getting old, and she’s going to work until the day she dies. And I want to be able to take care of her. And I don’t want to work until I die either. I would really like to be able to save money for retirement, or even for something, if something happens to me, so that I don’t end up on the street. 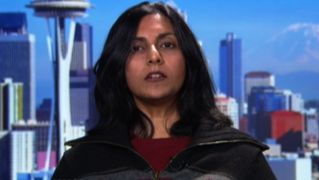