Amidst talk of a potential ceasefire, the Palestinian death toll has passed 815 in Israel’s relentless bombings of the Gaza Strip. On Thursday, at least 16 civilians died and more than 200 were wounded when a United Nations shelter was bombed in the Gazan area of Beit Hanoun. Palestinian officials have blamed Israeli tank shelling, while Israel has suggested militant rockets were at fault. Reporting from Gaza City, Democracy Now! correspondent Sharif Abdel Kouddous describes visiting the morgue where bodies are being taken, as well as a children’s hospital in northern Gaza that was severely damaged Thursday in a nearby air strike. “If the ceasefire falls apart, then we can only imagine that an escalation of the ground offensive — that’s what Israel has declared — will be in the cards,” Kouddous says. “We are looking at a very grave humanitarian crisis.”

AMY GOODMAN: The Palestinian death toll from Israel’s assault on the Gaza Strip has passed 815 as new attacks kill more civilians and spark the largest West Bank protests in decades. On Thursday, at least 16 civilians died and over 200 were wounded when a United Nations shelter was bombed in the Gazan area of Beit Hanoun. Palestinian officials have blamed Israeli tank shelling, while Israel has suggested militant rockets were at fault. The U.N. has declined to directly accuse Israel but suggested Israeli shelling is responsible. Two Palestinians were killed Thursday night near the Qalandiya checkpoint in the West Bank, and more than 200 were wounded when Israeli soldiers fired live ammunition at thousands of protesters who marched from Ramallah toward Jerusalem. More protests are happening in the West Bank today.

Meanwhile, Secretary of State John Kerry remains in Egypt, where ceasefire talks are underway. The Israeli newspaper Ha’aretz reports Kerry has drafted a new ceasefire proposal and is waiting to hear back from Hamas via the Qatari and Turkish governments. Hamas has demanded the lifting of the seven-year blockade of Gaza as a condition for a ceasefire.

Sharif, can you talk about what’s happened since we last spoke 24 hours ago?

SHARIF ABDEL KOUDDOUS: Well, Amy, right after I spoke to you, news broke of that shelling of the U.N. school in Beit Hanoun, which is in the north of Gaza. And we rushed to the hospital in Beit Lahia, the biggest hospital in the north, where the dead and wounded were being brought. Really heart-wrenching scenes, many women and children being brought in on stretchers, wounded. I met one man, a 21-year-old by the name of Hussein Shinbari, who had lost his mother, his three siblings, all under the age of 18, and his father’s second wife.

And multiple witnesses said that they had sought shelter in this U.N. school and that they thought they were safe there and that they were told to gather around 1:30 or 2:00 p.m. in the schoolyard to be taken to another school because there was some clashes in the area and shelling in the area. And at some point, multiple explosions hit the schoolyard. The Israeli military has alleged that it—initially alleged that it may have been an errant Hamas rocket, but the fact that there were multiple explosions in the same area belie that claim. And the Israeli military later acknowledged last night that it did fire into the area in response to hostile fire.

In the morgue of the hospital, I saw at least one baby—she must have been no more than one or one-and-a-half years old—who was killed.

And so, this was somewhere where, you know, some of the poorest people from Beit Hanoun had gone. They don’t have money to go anywhere else. They don’t have relatives to stay with. And this was a place of refuge that they had sought, and they came under this attack. And as you mentioned, 16 were killed and over 200 injured.

Also, late last night—well, not late, during around sunset time, there was a very large airstrike on a house in the Tuffah neighborhood of northern Gaza, of northern Gaza City. And the force of the blast severely damaged a children’s hospital, the Muhammad al-Durrah Children’s Hospital, that was just tens of yards away. I visited this morning. The ICU unit was completely destroyed inside, all the windows blown out. The window frames were toppled over cribs. One child, the director of the hospital told me, was two-and-a-half years old and was being intubated at the time of the attack. And the doctor was blown back by the force of the blast. Glass flew all over the baby, and the baby was killed.

So, this is continuing as we speak. There’s still the sound of drones in the air. There’s heavy shelling across the border area with Israel. And as these negotiations for a ceasefire continue, the bloodshed is also continuing.

AMY GOODMAN: Sharif, the issue of this ceasefire, can you talk about what you’re hearing so far? Secretary of State Kerry is in Cairo right now. What people are saying in Gaza City?

SHARIF ABDEL KOUDDOUS: Well, the Israeli Security Cabinet is scheduled to convene at 3:00 p.m., which is right now, to discuss the proposal for the ceasefire. One of the main elements of this ceasefire is—well, it’s a proposal to halt hostilities for a week, under which negotiations will continue. One of the conditions of it is that Israeli troops remain in Gaza and continue to search and destroy tunnels. This is Israel’s main objective, its declared objective, in this war. And so, this is causing a lot of rejection by many of the Palestinians that I’ve spoken to here. To them, it sounds like they just want Hamas to lay down its arms while Israel continues its military campaign. So we’ll have to see. There’s been indications from Khaled Meshaal, Hamas leader, that he’s open to some kind of humanitarian truce. But they have held out for their main condition for a ceasefire, which is that the seven-year siege of Gaza is lifted.

AMY GOODMAN: Can you tell us more stories of the people that you have met, and particularly what the hospital is like?

SHARIF ABDEL KOUDDOUS: Well, Amy, any hospital you go to in Gaza, you will see many children wounded. You will see many innocent civilians who have been caught up in this bloodshed. It’s almost difficult not to see dead people in Gaza over the last few days. And really, the number of children that you see wounded, the number of children that I’ve seen killed has been really astonishing.

And yesterday also, there was a much fiercer campaign and attack in, as I mentioned yesterday, in Khan Younis, in Khuza’a, where Israeli troops moved in. And this is near the border in southern Israel. And people described a nightmarish ordeal of 24 hours trying to get out; of moving from house to house seeking shelter and each house being shelled; of Israeli troops knocking on doors and taunting the men to come outside; of arresting men from their homes; of people trying to escape tank fire, walking with—holding white flags in the air, with their hands in the air like prisoners of war. And these are clearly civilians—women and children and men. Men took off their T-shirts and put their hands in the air to walk out.

And there’s many dead and wounded being left behind. I was just at the Shifa Hospital right now, and they are still bringing bodies in from the Shejaiya neighborhood, which was attacked by the Israeli military with a lot of indiscriminate tank shell fire on Sunday. And these bodies are decomposing, and they’re still being brought in. So we’re looking at a very grave humanitarian crisis.

AMY GOODMAN: The power—the issue of power and the power plant bombed?

SHARIF ABDEL KOUDDOUS: Right, Gaza’s only power plant was struck by three shells a couple of days ago, that provides about 30 percent of electricity to the Gaza Strip. Gazans now get about four hours of power a day. And power also severely affects water supply, for the pumps to pump water to the 1.8 [million] Palestinians. About 1.2 [million] Palestinians have no clean access to water in Gaza. I spoke to the head of the water utility here, who said that on average right now Palestinians get three hours of water every three days. So, you can imagine what that’s like for many people. When they do get water, they have to fill up bottles and jerrycans. And many people haven’t showered for days. It affects sanitation issues. And these are very basic human rights. And the very heavy displacement that has happened, over 150,000 people being displaced, has only exacerbated these problems.

AMY GOODMAN: And the effect of the mass protest in the West Bank, the largest protest that has been seen there in years, on the people of Gaza? Did word get through?

SHARIF ABDEL KOUDDOUS: Word did get through, and people here have expressed joy at the act of solidarity that was shown in the West Bank, that people are rising up and supporting their cause. And we’ll have to wait and see where this takes us. Will this ceasefire come into effect? And if it does, it’s only scheduled to be into effect on Sunday. And if we look at the past military campaigns on Gaza by Israel, it usually ramps up its violence as a ceasefire approaches. So I think, in many scenarios, we’re going to see a ramping up of violence going into Sunday. If the ceasefire falls apart, then we can only imagine that an escalation of the ground offensive—that’s what Israel has declared—will be on the cards.

AMY GOODMAN: Sharif Abdel Kouddous, thank you for joining us—stay safe—reporting to us from Gaza City. When we come back, we go to the spokesperson for the United Nations organization that runs the school that was just shelled, killing 16 people, wounding hundreds. Stay with us.

“No Safe Place”: After Deadly Attack on Gaza School, U.N. Warns 150,000 Seeking Shelter are at Risk 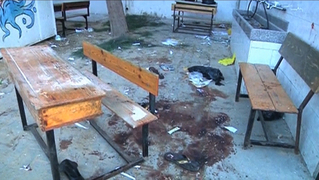 “No Safe Place”: After Deadly Attack on Gaza School, U.N. Warns 150,000 Seeking Shelter are at Risk