The events in Ferguson over the past week have sparked a national debate over racial profiling and the militarization of local police forces. On Thursday, Attorney General Eric Holder said, “I am deeply concerned that the deployment of military equipment and vehicles sends a conflicting message.” What Holder did not mention was the federal government’s role in supplying local police forces with military-grade equipment. The New York Times reports Department of Homeland Security grant money paid for the $360,000 BearCat armored truck on patrol in Ferguson. Most of the body armor worn by officers responding to the Ferguson protests was also paid for with federal money. We speak to Radley Balko, author of the book, “Rise of the Warrior Cop: The Militarization of America’s Police Forces.” “When we take domestic police officers and we train them like soldiers and we give them military gear and we dress them up like soldiers and we tell them they’re fighting a war — a war on crime or a war on terror — they’re going to start to see themselves as soldiers,” Balko says.

StoryDec 04, 2014Vince Warren on How Police Officers Get Away with Killing from Ferguson to NYC

AMY GOODMAN: Radley Balko is the author of the book Rise of the Warrior Cop: The Militarization of America’s Police Forces. He also blogs for The Washington Post. He’s speaking to us from Nashville. Talk about the level of militarization of this police department, what you saw as you watched the police for the first days of these protests.

RADLEY BALKO: Well, I mean, I think what we saw was a manifestation of a trend that’s been going on for 30 to 35 years. You know, it seemed particularly bad in Ferguson, but a lot of what we saw in Ferguson was the St. Louis County Police Department sending in their SWAT teams and tactical teams to, I guess what they would call, preserve order in Ferguson. You know, this has been happening, as I said, since about the early 1980s. The transfers from the Pentagon of surplus military equipment—we’re talking tanks, armored personnel carriers, grenade launchers, helicopters—that began early in the Reagan administration informally and then was formalized by Congress in the 1990s. We’ve had millions—literally millions of pieces of military equipment have been exchanged this way. And then, after September 11th, the Department of Homeland Security started sending out checks to buy new military-grade equipment from companies that have now sprung up to build that equipment. So, you know, this—what we’re seeing in Ferguson, this is not a local issue, really. I mean, this is something that’s been driven by national policies, by policies that Congress has approved of and has oversight of, and could end tomorrow, if they wanted to.

JUAN GONZÁLEZ: And, Radley Balko, I mean, I was struck not only by the assault weapons and the armored vehicles, but even by the officers changing their uniforms into military fatigues, as if they were going to war, rather than they were actually policing largely angry peaceful protests. There were some—there was some looting, and there was some rock throwing and possible Molotov cocktails, but it really was not on a major scale, from everything that I could tell. But yet they were loaded for war.

RADLEY BALKO: Right, and I think that, you know, there are the obvious problems when we see the weapons, but the uniforms matter. When police officers are wearing camouflage, it sends a very clear message to the community that they’re supposed to be serving. It also affects the mindset of the police officer himself. You know, the idea that when we take domestic police officers and we train them like soldiers and we give them military gear and we dress them up like soldiers and we tell them they’re fighting a war—you know, war on crime or war on terror—they’re going to start to see themselves as soldiers. And that’s just a mindset that’s not—that really isn’t appropriate for domestic policing. And I think you saw that in the way that they responded to protests—not just in Ferguson, but also, you know, a lot of the crackdowns on the Occupy protesters, on the crackdowns at the political conventions over the years. I mean, this has become our default response to protest in the U.S., and it’s something that, you know, I think could be very antagonistic toward the very idea of free speech and the First Amendment.

AMY GOODMAN: Talk about, for example, this BearCat armored personnel carrier, APC, and what it means, and snipers on top with guns.

RADLEY BALKO: Well, you know, I’ve written a lot about the BearCat. This is one of the new pieces of equipment that we have because of these DHS grants. And this is something that’s made by a company called Lenco. And a few years ago, I wrote about a town in New Hampshire that sort of rebelled against this. Their town was going to buy a BearCat with one of these DHS grants. And what I thought was fascinating was I interviewed somebody from the Lenco company and asked him about this, and he said this is all overblown, that if a BearCat shows up on the scene, it’s much more likely to be filled with crisis negotiators and psychiatrists than it is with, you know, militarized cops. And I found a video that Lenco sends to police departments across the country to market the BearCats. This is what they send them so that they’ll want to buy a BearCat with this DHS money. And the video shows camouflage-clad police officers piled into the BearCat. It shows up. They get out. They start shooting things. At one point it pokes a hole into a building and injects tear gas. And it was all set to AC/DC’s “Thunderstruck.” You know, these are not images and sounds of crisis negotiators or de-escalation experts. This was all about militarism. This was all about conflicts and aggression. And that’s how the company markets this piece of equipment to police departments, which I think says a lot.

RADLEY BALKO: Well, look, I mean, this is a government federal agency whose motto—their motto is “from warfighter to crimefighter.” So, you know, their very motto sort of portrays a misunderstanding of the role of soldiers versus the role of police officers. I think these are two very different jobs. The soldier’s job is to annihilate a foreign enemy; it’s to kill people and break things. A police officer’s job is to keep the peace and to protect our constitutional rights. And so, you know, this agency, I think, really reveals that with its very motto, from its very start, it doesn’t appreciate that difference and doesn’t recognize it. This is stuff that was designed for use in battle. It was designed for use to kill a foreign enemy, to annihilate a foreign enemy, and it’s being used on American streets in American neighborhoods.

AMY GOODMAN: MRAP being mine-resistant ambush protected vehicles. I wanted to put a question to Patricia Bynes, the issue of the police force, because while you may have more peaceful response to the peaceful protesters, you still have the issue of what happened to Michael Brown, also the overwhelmingly white police force in Ferguson. Many of these—a number of the people there may have, those police, been veterans of wars, perhaps occupied foreign lands; now they’re in an overwhelmingly African-American community with their military equipment. What about these longer-term issues?

PATRICIA BYNES: Well, you know, yesterday I was speaking, and because I’ve been out there every single day, what I did say is that I’ve seen things that I understand how the escalation happened. And I even saw an incident where a car came flying down the street and almost plowed through a line of police officers. And the car stopped maybe about a foot and a half away from where the police officers were. I have seen St. Louis County show an extreme amount of resistance when it comes to dealing with this issue. So I’ve seen how the escalation happened. But I’ve also talked to the officers. And once that car incident happened, I noticed that they did bring out the armored trucks in order to protect themselves in holding what was the line at the time. And one of the officers told me, he said, “Ma’am, we have a couple of vets back here.” He said, “And, you know, that was really scary. That reminded them of what happened in war, and they know that somebody—you know, people in war will drive a car or truck through the line.” So, you already have people who have been at war, you know, serving in our communities. So we have to keep public safety and also the officer safety in mind. But we need to have a serious conversation here in the St. Louis area about police tactics and police strategy. And we need to take the best practices that we’re currently seeing that are playing out in how to de-escalate a situation.

JUAN GONZÁLEZ: And finally, Reverend Renita [Lamkin], I’d like to ask you—we’ve just gotten word that the police will be releasing the name of the officer involved in the shooting at 8:00 a.m. your time, 9:00 a.m. here East Coast time. Could you talk—respond to that and how that might help also to begin defusing the situation that has been building up over the last week?

REV. RENITA LAMKIN: People want to be heard. They want answers. And all that you hear on the street is “Tell us his name. Why do you release the names of the criminals? Why do you publish the pictures of the looters, but can’t show this person’s name or face?” So I think it will bring a lot of healing to the community to just have a name. The issue of human life and the value of human life is really what the issue is, and when people aren’t even given the dignity of answers, and that devalues and dehumanizes them and dehumanizes us. And so, I think it will go a long ways to bring healing to the community.

AMY GOODMAN: Well, I want to thank you all for being with us, Reverend Renita [Lamkin], who was hit by a rubber bullet a few nights ago; Patricia Bynes, Democratic committeewoman of Ferguson County; and Radley Balko, author of the book Rise of the Warrior Cop: The Militarization of America’s Police Forces, which comes out in paperback later this month, speaking to us from Nashville.

This is Democracy Now! When we come back, we look at the whole crisis of Ebola. Stay with us.

As WHO Warns Ebola Death Toll is Underestimated, How Should Global Community Handle Dire Crisis? 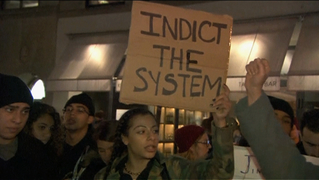