The group Reporters Without Borders is condemning what it calls the “presence of 'predators'” in Sunday’s march over the Charlie Hebdo massacre. The group says it is “appalled by the presence of leaders from countries where journalists and bloggers are systematically persecuted” such as Egypt, Russia, Turkey and the United Arab Emirates. Saudi Arabia joined other Arab and Muslim countries in condemning the attack at the same time as it faced global outrage at the public lashing of jailed blogger Raif Badawi. On Friday, Badawi received the first 50 of 1,000 lashes as part of his punishment for running a liberal website devoted to freedom of speech in the conservative kingdom. One cartoon shared on social networks shows a pencil being flayed by whips. Amnesty International considers Badawi a prisoner of conscience who is being punished for creating an online forum for debate. We are joined by two guests from Reporters Without Borders: Program Director Lucie Morillon, who attended Sunday’s march and was at the site of the Charlie Hebdo attack shortly after it occurred; and Delphine Halgand, U.S. director of Reporters Without Borders.

AARON MATÉ: The group Reporters Without Borders is condemning what it calls the “presence of 'predators'” in Sunday’s march over the Charlie Hebdo massacre. The group says it is, quote, “appalled by the presence of leaders from countries where journalists and bloggers are systematically persecuted,” such as Egypt, Russia, Turkey and the United Arab Emirates. Saudi Arabia joined other Arab and Muslim countries in condemning the attack at the same time as it faced global outrage at the public lashing of jailed blogger Raif Badawi.

AMY GOODMAN: On Friday, Badawi received the first 50 of a thousand lashes on—for punishment for running a liberal website devoted to freedom of speech in the conservative kingdom. One cartoon shared on social networks shows a pencil being flayed by whips. Amnesty International considers Badawi a prisoner of conscience who is being punished for creating an online forum for debate.

Well, joining us now in our New York studio are two guests. Lucie Morillon is the program director for Reporters Without Borders, based in Paris. She arrived in the United States Monday after attending Sunday’s march. She heads back to Paris tonight. She was at the site of the Charlie Hebdo attack shortly after it occurred. And with us also, Delphine Halgand, U.S. director of Reporters Without Borders.

We welcome you both to Democracy Now! Lucie, how did you get to the site of the attack so quickly?

LUCIE MORILLON: Well, at Reporters Without Borders, we were having a meeting with our director and my deputy, and one of my colleagues came in, and he was waving at us and saying something’s happening. So we told him to come in, with us. I was looking at him, saying, like, “This better be important, because we are discussing important matters.” And obviously, it was. He said, “We have done something terrible. It looks like they have been fired—you know, shots fired at Charlie Hebdo’s offices in Paris, and there might be dead people.” So, the first thing we did was to grab bags, notebooks, and to run to the scene.

When we arrived, there were very, very few people. We arrived before the official delegations, the minister of interior, the city—the mayor of Paris, and we were able to—me and our general director, Christophe Deloire, we were able get into the restricted areas with the officials. They knew who we are, and they thought it was important that Reporters Without Borders was there. So we were in front of the office. There were still bullets on the ground. It was just very chaotic. And at some point, we were just wondering who’s dead, what happened. And a man left the office, and he just went into President Hollande’s arms. He burst into tears, and he was saying, ”Charb est mort,” “Charb is dead.” He’s the editor of Charlie Hebdo.

AARON MATÉ: And talk about the response that we’ve seen in France since, over 3.7 million people marching on Sunday, a record for France.

LUCIE MORILLON: Absolutely. This attack, this deadly attack, was an unprecedented attack on journalists and media in France. But the response from the French society has been amazing. We’ve never seen that many people taking to the streets to call for freedom of the press, freedom of expression, and against all of those who are trying to silence journalists. And in the different gathering—we talked about Sunday, but it started on Wednesday. Reporters Without Borders and others called for a demonstration the very evening of that black day. And people went to the streets, like hundreds of thousands of people, and they were, you know, of all origin, all ages, with people who would read Charlie Hebdo and others who would not read or not like what they would publish, but at least they deemed that they had the right to do it and that they should not be losing their lives for it.

AMY GOODMAN: Among the many signs, a French Muslim woman holding a sign, ”Je suis Juive,” “I am Jewish.”

LUCIE MORILLON: Absolutely. It started with Charlie, and then we had this terrible shooting and hostage-taking situation in this kosher shop in Paris. And the crowd was singing on Sunday, “I am a journalist. I am Charlie. I am a Jew. I am a policeman.” And again, that was, you know, people from all origins.

AMY GOODMAN: And they were also saying, ”Je suis Ahmed,” who is the—

LUCIE MORILLON: Absolutely. The crowd was—and from the very early gatherings, the crowd was cheering for journalists, but also for police, who fell to protect our right to freedom of information.

AMY GOODMAN: So you flew into New York, and you’re flying right out back to Paris. Why are you here?

LUCIE MORILLON: Right. Well, I flew in because last night we had a very important thing to do in New York. There was a gathering organized by one of our board member for an American journalist. His name is Austin Tice. He has been missing in Syria for over two years. And this evening—last evening was an opportunity to call for American news organizations and people to try to help us raise awareness about his case. There’s a campaign to be launched soon by the advertising agency JWT with a blindfold. The idea is to ask for news outlets to wear on their website a blindfold to show that when journalists like Austin Tice are missing, taken hostage or targeted, this is our right to information that is targeted, this is all of us that are being blindfolded.

AMY GOODMAN: What is the U.S. government doing about Austin Tice?

LUCIE MORILLON: Well, that’s a good question. We’d like to know more about what they are doing. For now, we are really frustrated that there are no such information coming out. And this is a way. The more media coverage there will be, the more pressure on the American authorities.

AMY GOODMAN: Delphine Halgand, we last had you on Democracy Now! talking about the crackdown on journalists in the United States. Can you talk about this in light of what we’re seeing now in France?

DELPHINE HALGAND: Oh, you know, I think we all have been very moved to see so much support from the U.S. administration and from the American citizens. All these gathering in New York, in Washington, have really been relayed in France and are very important. And I think all French people know that American people are with us, in a sense, to defend our freedom. Yes, press freedom is not perfect in the U.S. It’s not—press freedom is not perfect in France. But today—on Sunday, millions of people walked in the streets in France, all around the world, to show that maybe terrorists can kill journalists, but they will never kill our freedom.

AARON MATÉ: I’m wondering if this moment in France will lead to any kind of self-reflection in terms of the criticisms that have been leveled against Charlie Hebdo for its depiction of Muslims. In large part, they’re the underclass. They feel stigmatized already. And that, critics say, contributes to the insensitivity of Charlie Hebdo in how Muslims were depicted. No one questions the right to free expression, but does an attack like this—does that lead to maybe some rethinking of how Muslims are caricatured in publications like Charlie Hebdo?

DELPHINE HALGAND: I think you should just look at all the Muslims who were gathering in the street on Sunday and who were saying, “Maybe I disagree with what you were saying, but I’m here to say that you had the right to say it.” And I really believe that that’s the freedom that we are defending, and that’s the fight we are here continuing.

AARON MATÉ: What about the fact that you do have laws against anti-Semitism? And Charlie Hebdo has been accused of censoring people or firing someone who wrote something that was considered anti-Semitic?

LUCIE MORILLON: Yeah, I mean, we’re often asked if they went too far, if they pushed the envelope on freedom of expression. But no, they just exercised this freedom of expression. Even in France—you point out to the laws we have—it is forbidden to call for hatred, to call for violence, to stigmatize people. But you can criticize religion. There’s a difference between criticizing religion and going after people, criticizing Muslims, Jews and so on. The last time Charlie Hebdo was sued, they won this case. So it means that, you know, even under French law, it was fine, and even under international standards, what they were doing was really freedom of expression. They were not abusing it as we’ve heard. And it’s important, again, that French journalists continue to tackle these issues. The last thing we should do is to resort to self-censorship, although I think all of the people who died for that would just not recognize what the French media might become. That is the next challenge.

Massacre in Nigeria: Up to 2,000 Feared Dead in Boko Haram’s Worst Attack to Date

NEXTMassacre in Nigeria: Up to 2,000 Feared Dead in Boko Haram’s Worst Attack to Date 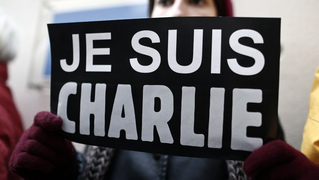