Much of President Obama’s State of the Union address focused on the economy and efforts to bolster the middle class with a push for education, child care and tax breaks. But did he go far enough? We speak to Ralph Nader, longtime consumer advocate, corporate critic and former presidential candidate. His latest book is called “Unstoppable: The Emerging Left-Right Alliance to Dismantle the Corporate State.”

JUAN GONZÁLEZ: We continue our look at President Obama’s State of the Union, in which he laid out his vision for his final two years in office. Much of his speech focused on the economy and efforts to bolster the middle class with a push for education, child care and tax breaks.

PRESIDENT BARACK OBAMA: So what does middle-class economics require in our time? First, middle-class economics means helping working families feel more secure in a world of constant change. That means helping folks afford child care, college, healthcare, a home, retirement. And my budget will address each of these issues, lowering the taxes of working families and putting thousands of dollars back into their pockets each year.

Here’s one example. During World War II, when men like my grandfather went off to war, having women like my grandmother in the workforce was a national security priority. So this country provided universal child care. In today’s economy, when having both parents in the workforce is an economic necessity for many families, we need affordable, high-quality child care more than ever. It’s not a nice-to-have; it’s a must-have.

So it’s time we stop treating child care as a side issue or as a women’s issue, and treat it like the national economic priority that it is for all of us. And that’s why—that’s why my plan will make quality child care more available and more affordable for every middle-class and low-income family with young children in America, by creating more slots and a new tax cut of up to $3,000 per child, per year.

AMY GOODMAN: That’s President Obama last night in his second-to-last State of the Union address. For more, we’re joined by Ralph Nader, longtime consumer advocate, corporate critic, former presidential candidate. His latest book is called Unstoppable: The Emerging Left-Right Alliance to Dismantle the Corporate State. And joining us from Rochester, David Cay Johnston, investigative reporter who won a Pulitzer Prize while at The New York Times. He’s currently a columnist for Tax Analysts and Al Jazeera, as well as a contributing editor at Newsweek. His latest book, Divided: The Perils of Our Growing Inequality. He’s joining us from PBS station WXXI in Rochester.

Ralph, let’s begin with you. The whole issue of tax cuts and taxing the rich?

RALPH NADER: Well, he was too vague on that. What he should have done is said that Ronald Reagan supported capital gains and dividend taxes like ordinary income, so there wasn’t this split where the rich get lower tax on their capital gains or dividend. And he didn’t tie in any idea of revenues for the public works program that he touted.

You know, Amy, State of the Union speeches are signaling presentations. They signal by what they say, how they say it and what they don’t say. And on that criteria, it wasn’t a very coherent speech. He stressed civil liberties and never mentioned what he’s going to do about the renewal of the notorious PATRIOT Act provisions. He said that there should be more oil and gas production, and then he warned about climate change. He said there should be strengthening unions and voices of workers, and then he took it away with the Trans-Pacific trade agreement, which exports jobs, and he wants to ram through Congress a voiceless fast track that prohibits amendments and labor from having a role in that deliberation.

Also notice that he said again, “Close down Gitmo.” We’ve heard that song before. Again, he didn’t mention the Israeli-Palestinian conflict at all.

And I think what is most troubling is what he avoided saying, like he desperately needs funding for his programs, like day care and so on. And he didn’t mention the squeeze on the IRS budget by the Republicans, so the IRS now cannot begin to collect what they say is $300 billion of evaded taxes every year. That’s $300 billion of evaded taxes, not avoided taxes, which David Cay Johnston will be talking about.

So, I think he missed a lot of opportunities. And it was not specific enough. It was not coherent enough. And he could have gone for more convergence with the Republicans, as I point out in great detail in my book, Unstoppable: The Emerging Left-Right Coalition to Dismantle the Corporate State.

David Cay Johnston: Class War Is Being Waged by the Rich Against the Poor

NEXTDavid Cay Johnston: Class War Is Being Waged by the Rich Against the Poor 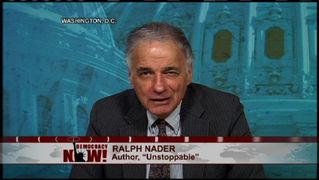