A member of the grand jury that declined to indict Ferguson police officer Darren Wilson for fatally shooting unarmed African American Michael Brown is suing for the right to speak publicly about the case. The lawsuit accuses Prosecuting Attorney Bob McCulloch of presenting possible charges to the grand jury in a “muddled and untimely manner,” and notes the case had a “stronger focus on the victim” than other cases. It also challenges “the implication that all grand jurors believed that there was no support for any charges” against Wilson. The juror is challenging a lifetime ban preventing grand jury members from discussing cases. The grand juror has been identified only as a St. Louis County resident. We are joined by Tony Rothert, the legal director of the American Civil Liberties Union of Missouri, which is representing the unnamed juror.

JUAN GONZÁLEZ: We turn now to Missouri, where a member of the grand jury that declined to indict Ferguson police officer Darren Wilson for fatally shooting unarmed African American Michael Brown is suing for the right to speak publicly about the case. The lawsuit accuses Prosecuting Attorney Bob McCulloch of presenting possible charges to the grand jury in a, quote, “muddled and untimely manner,” and notes the case had a, quote, “stronger focus on the victim,” Michael Brown, than other cases. It also challenges, quote, “the implication that all grand jurors believed that there was no support for any charges” against Wilson. The juror is challenging a lifetime ban preventing a grand jury member from discussing cases. The grand juror has been identified only as a St. Louis County resident and is being represented by the American Civil Liberties Union.

AMY GOODMAN: Meanwhile, several Missouri residents have filed a bar complaint against Prosecuting Attorney Bob McCulloch and two assistant prosecuting attorneys in the handling of the grand jury. According to the complaint, the prosecutors violated 15 Missouri Rules of Professional Conduct.

This comes as the NAACP Legal Defense Fund has asked a Missouri judge to convene a new grand jury to consider charges against Officer Darren Wilson. On Monday, the NAACP Legal Defense and Educational Fund submitted a letter to St. Louis County Circuit Judge Maura McShane requesting an investigation into the grand jury proceedings that led to the decision not to indict Wilson.

Welcome to Democracy Now! So, can you lay out for us the law in Missouri that dictates what a grand juror can or cannot do, especially in light of the fact that the prosecutor can speak out all he wants, talking about Bob McCulloch?

TONY ROTHERT: Right. So, the law in Missouri is the same as it is in most states. Grand jurors are not allowed to speak at all, not about the evidence that they heard, their opinions about the evidence, or the legal counsel they received from the state. And usually, you know, prosecutors don’t speak about what happens in a grand jury, either, at least not in great detail.

JUAN GONZÁLEZ: And in addition to that, the prosecutor has admitted that he knowingly put before the grand jurors witnesses who he believed were not telling the truth or suspected were not telling the truth, an extraordinary admission, it seems to me, for a prosecutor. From what you have seen of the released minutes, what questions does your client have about the public record versus what actually happened in the grand jury?

TONY ROTHERT: Well, I think the biggest thing that our client—one of the bigger things that this person has to offer is the contrast in how this grand jury proceeding was from other grand jury proceedings. So, this grand jury had been together for several months and heard hundreds of cases. They usually lasted 10 or 15 minutes. And there are many ways in which the Darren Wilson investigation was completely different—not only that it took longer, not only that prosecutors put on witnesses they didn’t believe were telling the truth, but also how the grand jury was instructed about the law, which is, ultimately, very important to what their decision is.

AMY GOODMAN: I want to ask exactly what happened during the grand jury proceedings. According to the released grand jury documents, the assistant district attorney, Kathi Alizadeh, said to the jurors, quote, “I know this is different than other cases because normally when we’ve charged somebody with an offense, you have the charge in front of you, you can read what the charge is, you can read what maybe the elements are and you don’t have that in this case.” Tony Rothert, can you explain the significance of this?

TONY ROTHERT: So, normally, even from the records we have, we know that when the grand jury—before they start hearing evidence, they know what they’re looking at. They know what the elements of the crime are, so they know what they need to match up to return an indictment. Here, it looks like the grand jury is left in the dark. They weren’t told what the law was until the very end. And in some respects, with regarding self-defense, they were told the law—you know, about an unconstitutional Missouri law. So, it just wasn’t clear to the grand jury, I don’t believe, that—what the law was and what indictments they could return and what evidence they would need to know.

TONY ROTHERT: Right. So, you know, this person came to us originally with an interest in speaking out and wondering, you know, what would happen to me if I did this. And I think it’s troubling. You know, just before the prosecuting attorney went out and gave an hour-long press conference detailing what the grand jury did, the grand jurors were handed copies of the Missouri laws that make it a misdemeanor offense to speak out about anything, anything that happened as part of a grand jury. So, you know, these folks are afraid, reasonably so, I think, to speak out. Also, just because it’s a peculiar situation, the person who they might contradict is Bob McCulloch, the prosecuting attorney, who would also be the person who has the discretion to decide whether or not to charge them with violating the grand jury secrecy laws. 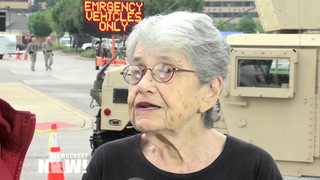