We return to our top story of the day, the killing of at least 12 people in a shooting attack on a French satirical magazine in Paris. Witnesses say masked gunmen entered the offices of Charlie Hebdo and opened fire with automatic weapons. The dead reportedly include four cartoonists and two police officers. A major police operation is underway in the Paris area to catch the killers. Charlie Hebdo has faced attacks and threats for its caricatures of the Prophet Muhammad, which helped spark protests across the Middle East in 2012. We are joined by Tariq Ramadan, a professor of contemporary Islamic studies at Oxford University who is considered one of the most prominent Muslim intellectuals in Europe. Responding to reports the attack was carried out by Islamist militants, Ramadan says: “This is just a pure betrayal of our religion and our principles.”

AMY GOODMAN: We’re going to turn right now—and, by the way, we will link to Juan’s column in the New York Daily News, but we’ve got to return to the top story of the day. Juan?

JUAN GONZÁLEZ: Right, and that’s the killing of at least 12 people in a shooting attack on a French satirical magazine in Paris. Witnesses say masked gunmen entered the offices of the magazine, Charlie Hebdo, and opened fire with automatic weapons. The dead reportedly include four cartoonists and two police officers. A major police operation is underway in the Paris area to catch the killers.

AMY GOODMAN: The magazine Charlie Hebdo has drawn multiple threats for its caricatures of the Prophet Muhammad. In 2012, the magazine’s cartoon depicting Muhammad in pornographic poses helped spark protests across the Middle East.

For more, we’re joined right now by Tariq Ramadan, professor of contemporary Islamic studies at Oxford University in Britain, the author of a number of influential books on Islam in Europe.

Can you respond to these developments in Paris? It looks like at least 12 people dead, a number injured, in this shooting attack on this satirical magazine, this satirical newspaper’s offices. Tariq Ramadan?

TARIQ RAMADAN: Look, first, we have to condemn what has been done and what’s happening in Paris. That’s not—you know, when we are told that what they said is that the prophet of Islam has—it’s a revenge, and this is the way—no, this is just a pure betrayal of our religion and our principles, that that’s not acceptable. And my sympathy goes for the families and the victims. And whatever happened with, you know, the journalists, and one of the journalists who was killed, apparently—I don’t know if this has been confirmed—is someone that I debated in prime-time TV in France, and I didn’t agree with him, and he was quite, you know, offensive in the way he was talking about Islam. But the only thing that we have to say is that we need to enter and to be involved in critical dialogue and critical discussions about what is happening in France and elsewhere in Europe. But by any, any standard, we have to condemn what was done, and say it clearly: This is betraying our principles, our religion and everything we stand for.

JUAN GONZÁLEZ: And, Tariq Ramadan, have you been able to tell from reports whether anyone has claimed responsibility for the attack?

TARIQ RAMADAN: So far, there is—the only thing that we know is that they talked about Islam. They were talking about the prophet, and they said this is a revenge. So the only thing that they are connecting this to, what the satirical journal or magazine was doing. This is the only thing that I heard so far. But, once again, there is quite clearly a connection that was done by the people who did it, when they were leaving. And this is why—and it’s quite clear that this is—it is, you know, Charlie Hebdo, was known for a series of controversial publications over the last two or three years, and I think that the connection is quite clear. So this is why we have to be clear as much as is needed today.

AMY GOODMAN: What do you think is most important to understand right now? I mean, there have been a series of attacks on journalists and newspapers that have parodied, that have caricatured the Prophet Muhammad. In this latest attack, this is clearly the biggest attack that’s ever taken place in—

TARIQ RAMADAN: I think that, once again, we know what happened in—you know, some of the slogans and some of the statements coming from people like Da’ish, or the so-called Islamic State in Iraq and in Syria, they are using some of the controversial issues around the world and targeting journalists or targeting intellectuals and, in fact, trying to focus on some of the sensitive issues in specific countries. So this is where, as Western Muslims—as Muslims as a whole, but also as Western Muslims—we have to be quite clear on the fact that the critical discussion that is now necessary in our Western societies, be it in the States or in Europe or in France, we have to be involved. We have to make it clear that—there should be no confusion—Islamophobia is the racism, is the—but it’s only as citizens, it’s only in the critical debate, it’s only with all the forces and all the trends within our societies that are against any type of racism, that we are going to resist and reform the minds and the hearts of our fellow citizens. And it could never be accepted, never be supported, such actions that are now instrumentalizing some of the frustrations that we have in the West as to, you know, equal citizenship and racism, and using this to support what is in fact not acceptable and has to be condemned. So, there is here a danger for us to see some of our fellow Muslims—

AMY GOODMAN: Tariq Ramadan, we must leave it there, but I hope you will join us tomorrow, professor of contemporary Islamic studies at Oxford University, visiting professor at the Faculty of Islamic Studies in Qatar [sic], author of a number of influential books on Islam and Europe, was named by Time magazine as one of the most important innovators of the 21st century. 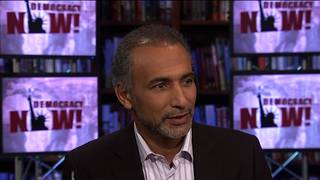