Gyasi Ross: Why I Support Bernie Sanders & the #BlackLivesMatter Protesters Who Interrupted Him

As Democratic presidential candidates including Sen. Bernie Sanders prepare for the first debate Tuesday, we talk to Gyasi Ross about his recent piece on TheStranger.com, “I Support Bernie Sanders for President and I Also Support the Black Lives Matter Takeover in Seattle.” Ross was in attendance when Black Lives Matters activists disrupted a Sanders appearance in Seattle.

StoryFeb 26, 2016“Trump is a Mercenary”: Native Writer Gyasi Ross on GOP Debate & Why He’s Not Endorsed Anyone (Yet)

AMY GOODMAN: The Democratic debate is coming up tomorrow in Las Vegas. The Democratic presidential contenders will gather. You recently wrote a piece, Gyasi, headlined “I Support Bernie Sanders for President and I Also Support the Black Lives Matter [Takeover in Seattle].”

GYASI ROSS: Yeah. Well, you know, people—there’s unfortunately—we exist—that’s another one of those myths, that we have to have binaries, right? That after the Black Lives Matter movement took over, commandeered the stage from presidential candidate Bernie Sanders, that we had to choose one or the other. And that’s just untrue. Bernie Sanders, although he’s an amazing and progressive, and he’s been on the right side of history as a candidate—that’s beautiful, but he’s still a white man, who has unquestionably benefited from white privilege. And these young folks, these young Black Lives Matter activists, took the stage for him and caused him just a little bit of discomfort for about five minutes, and the world seemed to be shaken up. And I was in fact torn at that particular moment, and I wrote in that particular piece that it was a weird moment. But in the grand scheme of things, 500 years of white domination, that’s just a micro-adjustment. That’s the smallest of micro-adjustments that said, “Yes, you, too, are on notice that we’re paying attention to your actions, and you need to communicate with us properly, because this is bigger. This urgency absolutely comes from a real, tangible and palpable place, and you have to recognize that urgency.”

AMY GOODMAN: Larry Hamm, how are you dealing with the presidential campaign now? What do you think the issues are that need to be injected? Do you think the Black Lives Matter movement is very significant in injecting these issues?

LARRY HAMM: Well, of course I think the Black Lives movement is significant and has done great work. And this was one of the reasons we went to the anniversary of the Million Man March on Saturday, because two of the key issues at that time were police brutality—and our brother spoke how that impacts the indigenous community, the Native American community—and police brutality in our own community, and the high rates of homicide that exist in our community. So, we brought with us Sheila Reid, the mother of Jerame Reid, who was shot dead at point-blank range by Bridgeton police. We—

LARRY HAMM: In New Jersey. His—

LARRY HAMM: This happened in December of last year. And the dash cam video went viral. And she went down with us. And she went down, and we also went down to campaign for Abdul Kamal, who was killed by police in Irvington, New Jersey, and Kashad Ashford, who was killed by police in—he was killed by Rutherford and Lyndhurst police and state police in New Jersey, and also Radazz Hearns, who fortunately, 14-year-old boy, he survived, but he was shot in the back seven times. So, this is an issue that must be raised by presidential candidates. I mean, people shouldn’t even come in our community and in our churches unless they’re going to address these issues. You know, too many people just can come in and say anything they want to say in our community and leave, and think they automatically have our support. But this was what the minister was talking about when he said “justice or else.” So now it’s time for the “or else” part. And with regard to politics, it’s not going to be business as usual. The “or else” is going to be holding people who are seeking office, running for office, holding them accountable and making them address our issues.

AMY GOODMAN: Do you feel that electoral politics makes a difference in this country?

LARRY HAMM: I think it is absolutely important that people vote. I urge people. Black folks, we fought and died for the right to vote. And it has had an impact. It’s clear that voting alone is not going to solve our problem. I think we have to go back. And I am so glad to hear Minister Farrakhan mention Martin Luther King in his speech, and he called Martin Luther King a revolutionary. And remember, in his last days, Dr. King said we needed a radical transformation of our socioeconomic system, we needed a radical redistribution of power and wealth. So voting is one part of it. Boycotting and economic withdrawal is another part.

AMY GOODMAN: Charles Blow wrote a piece in The New York Times. He said, “The rally was in a way a pageant for Farrakhan and the Nation of Islam.” Do you agree?

LARRY HAMM: I don’t agree with that. I don’t agree with the word “pageant.” It is clear that the Million Man March and the marches that are part of the Millions More Movement that followed were organized by the Nation of Islam, which is still one of the strongest organizations in our community. Minister Farrakhan has wide support in the black community, because people see him as an uncompromising, independent black leader. It wasn’t a—if it had been a pageant, then it wouldn’t have been opened up to all the other racial and ethnic groups. Our brother here would not have been able to speak, and other representatives of other organizations. No, it was organized by the Nation of Islam, clearly, but as part of a broad coalition to fight oppression in our communities.

AMY GOODMAN: We’re going to have to leave it there, but, Larry Hamm, I want to thank you for being with us, chairman of the People’s Organization for Progress. He was at the first Million Man March in 1995, this weekend was there when tens of thousands of people marched on Saturday. And, Gyasi Ross, thank you so much. He was a speaker at the march, also author, lawyer, storyteller, member of the Blackfeet Nation, author of How to Say I Love You in Indian. 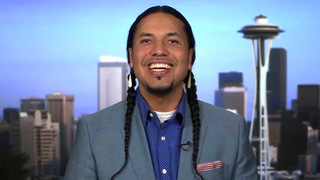