It’s been more than 50 years since Allen Dulles resigned as director of the CIA, but his legacy lives on. Between 1953 and 1961, under his watch, the CIA overthrew the governments of Iran and Guatemala, invaded Cuba, and was tied to the killing of Patrice Lumumba, Congo’s first democratically elected leader. We speak with David Talbot, author of “The Devil’s Chessboard: Allen Dulles, the CIA, and the Rise of America’s Secret Government,” about how Dulles’ time at the CIA helped shape the current national security state.

AMY GOODMAN: It’s been over half a century since Allen Dulles resigned as director of the CIA, but his legacy lives on. Between 1953 and '61, under his watch, the CIA overthrew the governments of Iran and Guatemala, invaded Cuba, was tied to the killing of Patrice Lumumba, Congo's first democratically elected leader.

A new biography of Allen Dulles looks at how his time at the CIA helped shape the current national security state. Biographer David Talbot writes, quote, “The Allen Dulles story continues to haunt the country. Many of the practices that still provoke bouts of American soul-searching originated during Dulles’s formative rule at the CIA.” Talbot goes on to write, “Mind control experimentation, torture, political assassination, extraordinary rendition, mass surveillance of U.S. citizens and foreign allies—these were all widely used tools of the Dulles reign.”

Well, David Talbot joins us now to talk about his new book, The Devil’s Chessboard: Allen Dulles, the CIA, and the Rise of America’s Secret Government. He’s the founder and former CEO and editor-in-chief of Salon. David Talbot is also author of the best-seller, Brothers: The Hidden History of the Kennedy Years.

It’s great to have you with us, David.

AMY GOODMAN: What an astounding book. Chelsea Manning, Edward Snowden—how do they relate to Allen Dulles, the longest-reigning CIA director?

DAVID TALBOT: Well, as I write in the book and as you just pointed out, all the practices that we are wrestling with as a country now, the intelligence and security measures—including, I might add, the legacy of the killing fields in Central America that your guest was just discussing, in Guatemala and so on—that all had its roots, not after 9/11, but during the Dulles era and the Cold War. He was a man who felt he was above the law. He felt that democracy was something that should not be left in the hands of the American people or its representatives. He was part of what the famous sociologist from the 1950s, C. Wright Mills, called the power elite. And he felt that he and his brother and those types of people should be running the country.

DAVID TALBOT: Exactly. They were a dynamic duo, of course: His brother, Foster, as he was known, was secretary of state, as you say, under Eisenhower; he was the head of the CIA. It was a one-two punch.

AMY GOODMAN: Let’s go to Allen Dulles in his own words, speaking in 1965, defending the actions of the CIA.

ALLEN DULLES: The idea that it is necessarily nefarious, it’s always engaged in overthrowing governments, that’s false. That’s for the birds. Now, there are times—there are times when the United States government feels that the developments in another government, such as in the Vietnam situation, is of a nature to imperil the—the safety and the security and the peace of the world, and asks the Central Intelligence Agency to be its agent in that particular situation. … At no time has the CIA engaged in any political activity or any intelligence activity that was not approved at the highest level.

AMY GOODMAN: That’s Allen Dulles in 1965. “At no time,” he says. So, talk about the history, that is so intimately connected to us today. Often countries that have been—their leaders have been overthrown, know this history in a way that Americans don’t know.

DAVID TALBOT: And, of course, Allen Dulles was a consummate liar and was, you know, very adept at manipulating the media, the American media. That particular interview was one of the ones that actually he got posed some of the tougher questions, by John Chancellor of NBC News. And he actually went on to say, “You know, I try to let the Congress know what I’m doing,” when Chancellor asked him, “Is there any political oversight of the CIA?” “But whenever I go to Congress,” he says, and he starts to tell the secrets of the CIA, members of Congress would say, “No, no, no, we don’t want to know. We don’t want to talk in our sleep.” So that, of course, was his cover.

Yes, overthrowing governments at will—I think one of the more tragic stories I tell in the book is the story of Patrice Lumumba, who was this young, charismatic leader, the hope of African nationalism in the Congo. And he was overthrown by a CIA-backed military coup in the Congo and later captured and brutally assassinated. The CIA’s story before the Church Committee in the 1970s: “Oh, we tried to kill him, we tried to poison him, but we’re the gang that can’t shoot straight. We’re not very good at assassinations.” Well, they were far too modest. In fact, we now know that the people who beat Patrice Lumumba to death, once he was captured, were on the payroll of the CIA.

Now, Allen Dulles kept that fact from John F. Kennedy for over a month. John Kennedy, when he was running for president, was known as the advocate, a supporter of African nationalism. They knew that once John Kennedy was inaugurated—the CIA—and was in office, that he would help Lumumba, who was in captivity at that point. And I believe that his execution, his murder, was rushed before Kennedy could get in the White House. They then withheld that information from the president for over a month. So the CIA was defying presidents all the time, and particularly in the case of Kennedy, who they felt was young, they could manipulate, and they didn’t need to really bring into their confidence.

AMY GOODMAN: So you have the CIA running international intelligence, and they’re keeping—well, you say keeping from. What makes you believe that Kennedy didn’t know?

DAVID TALBOT: That he didn’t know about the murder? Well, there’s a famous picture that was taken of him in the White House as he’s getting the phone call from—not from the CIA, but from U.N. Ambassador Adlai Stevenson, who finally tells him, a month after Lumumba has been buried and dead, about this terrible murder. And his face, as you see from this famous photograph by Jacques Lowe, the White House photographer, is crumpled in agony. I think this shows all the terrible sorrow that’s to come in the Kennedy presidency. And, you know, a lot of people think that the war between Kennedy and the CIA began after the Bay of Pigs invasion, the CIA’s disastrous operation in Cuba. That is true, it became particularly, I think, aggravated after that. But you can see from this, from day one, even before he was inaugurated, the CIA was defying him.

AMY GOODMAN: 1953, go back a few years. What is the relevance of what the Dulles brothers did in Iran with what we are seeing today in U.S.-Iranian relations?

DAVID TALBOT: Well, again, these terrible historical ripples continue from the Dulles era. Iran was trying to throw off the yoke of British colonialism. Britain, through British Petroleum, the company now known as British Petroleum, controlled all of Iran’s oil resources. And under the leadership of Mosaddegh, this popular leader who was elected by his people, he began to push back against British control and, as a result, antagonized Western oil interests, including the Dulles brothers. The Dulles brothers’ power originally came from their law firm, Sullivan & Cromwell, the most powerful law firm on Wall Street, and they represented a number of oil companies. So, once the Western oil interests were antagonized by Mosaddegh’s attempt to reclaim sovereignty over these oil resources, his days were numbered.

And so, the task of overthrowing him was given to the CIA, given to Allen Dulles. There was a very volatile situation, people supporting Mosaddegh in the streets versus the CIA-supported forces. The Shah, who was the puppet, of course, ruler of Iran on the Peacock Throne, flees, because he’s not a particularly brave man. He flees to Rome. Dulles flies to Rome. He’s busy shopping, the Shah, enjoying his exile with his glamorous wife. And Dulles is given the job of putting a little lead in his spine and getting the Shah to return to Iran after they finally succeed, the CIA, in overthrowing the popular leader, Mosaddegh.

Well, after that, that begins a reign of horror then in Iran. Democratic elements, the left, Communist Party are rounded up, tortured. And the Shah is installed in this terrible autocratic regime, that, of course, we know, had a terrible downfall during the Carter administration. And we’re still paying the price for the bitterness that the Iranian people feel towards the United States for intervening in their sovereign interests.

AMY GOODMAN: And the U.S. would go on—the Dulles brothers would go on to do the very same thing the next year, 1954, in Guatemala?

DAVID TALBOT: That’s right. They were on a roll. They thought they could do anything, exert their will anywhere in the world. Jacobo Árbenz, again, a popular, democratic leader, elected in Guatemala—

AMY GOODMAN: We only have 10 seconds in this portion.

DAVID TALBOT: The Kennedy of Guatemala is overthrown, again, by the Dulles brothers, partly because they were representatives of United Fruit. United Fruit was a major power player in Guatemala. 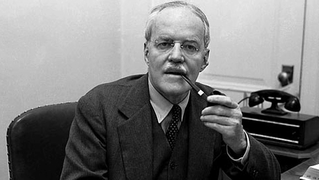