The Israeli government has rejected a French call for international observers at the Temple Mount, the holy site that has been a flashpoint for the current unrest in Israel and the Occupied Territories. The United States is backing Israel’s stance ahead of a meeting with top leaders from both sides in the coming days. After President Obama restored ties to Cuba and brokered a nuclear deal with Iran, some are hoping for a similar change on Israel-Palestine during his last 15 months in office. Will it happen? We are joined by Palestinian human rights lawyer Jamil Dakwar.

AMY GOODMAN: Jamil Dakwar, as we wrap up, your final comment? Also, we have seen President Obama go out on a limb on a number of issues—on Cuba, went against what was the prevailing wisdom, but certainly represented actually a majority opinion in this country on Cuba, and is changing relations with Cuba; on the Iran deal, pushed very hard to get this Iran deal. Do you see him possibly doing something like this on Israel-Palestine?

JAMIL DAKWAR: Sadly, I think it will probably be hard to see him pushing that in the last year in his administration, given the Iran deal, given everything, the political capital, has spent on all these other foreign policy issues. I think it would be very sad for this administration that they didn’t really get it right on the priority and the action, because U.S. ultimately has the power over financial support to Israel, diplomatic, political support. They know what needs to be done. And sadly, every time, you know, Palestinians resort to nonviolent practice—and that’s the overwhelming majority of Palestinians have been doing that, as was mentioned, whether in Nabi Saleh, in all the different places in the West Bank, in trying to oppose the wall, trying to oppose other crackdowns, and all of a sudden now, individual attacks and violent attacks, that are very, very unfortunate, now turn to be the one to be representing all the Palestinian struggle for freedom and justice. And that’s, I think, the sad reality where we live.

AMY GOODMAN: I want to thank you both for being with us, Jamil Dakwar, human rights lawyer, a Palestinian citizen of Israel, who previously worked as a senior attorney at Adalah, an Israeli human rights group; also Nathan Thrall, senior analyst at the International Crisis Group, speaking to us from Jerusalem.

When we come back, David Talbot on the longest-reigning director of Central Intelligence, Allen Dulles. Stay with us. 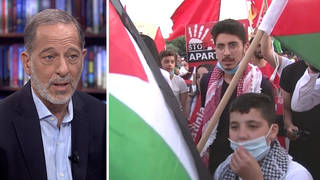