A young Saudi protester is set to be beheaded and crucified for his role in 2012 pro-democracy protests. Ali Mohammed al-Nimr was arrested at the age of 17 and convicted of encouraging protests during the Arab Spring. He faces execution any day. Earlier this month, in response to mounting international pressure to release al-Nimr, the Saudi Embassy in London said, “the Kingdom of Saudi Arabia rejects any form of interference in its internal affairs and any impingement on its sovereignty or the independence and impartiality of its judiciary.” We are joined by Clive Stafford Smith of the international legal charity Reprieve, which has just released a report on executions in Saudi Arabia.

NERMEEN SHAIKH: We’d like to turn now to Saudi Arabia. Reprieve has just released a report on executions in Saudi Arabia. I want to ask about the mother of a Saudi protester sentenced to be beheaded and crucified for his role in the 2012 pro-democracy uprising, who has begged President Obama to intervene to save her son’s life. Ali Mohammed al-Nimr was arrested at the age of 17 and convicted of encouraging protests during the Arab Spring. He faces execution any day now. Al-Nimr is the nephew of a prominent cleric who also received a death sentence following pro-democracy protests. Speaking to The Guardian last week, his mother, Nusra al-Ahmed, condemned her son’s sentence.

NUSRA AL-AHMED: [translated] No sane human being would rule against a child of 17 years old using such a sentence. And why? He didn’t shed any blood. He didn’t steal any property. No one could accept a ruling that is so savage. It’s savage, disgusting. A judge should be in the position of a father. He should be more merciful than the attorney general.

NERMEEN SHAIKH: Earlier this month, in response to mounting international pressure to release al-Nimr, the Saudi Embassy in London issued a statement saying, quote, “the judiciary is an independent body and the Kingdom of Saudi Arabia rejects any form of interference in its internal affairs and any impingement on its sovereignty or the independence and impartiality of its judiciary.” So, Clive Stafford Smith, can you talk about the report that Reprieve released and what you found on executions? Who is sentenced to death in Saudi Arabia?

CLIVE STAFFORD SMITH: Well, the reason we at Reprieve got involved in this in the first place, we’ve wanted to do something about executions in Saudi for years, but it’s very, very difficult to there. And it’s partly because of the executions, but also partly because of the bedfellows we have in the West, that we make friends with these regimes, like Saudi. Saudi Arabia is doomed to collapse, isn’t it? I mean, you’ve got these incredibly regressive and repressive people running a country that’s absolutely bound to fall. And you’ve got 65 percent of Saudis, in the most recent poll, saying they support ISIS and they support what ISIS is doing. So, you know, the big principle here, in one way, is that we need to choose our friends far more wisely, otherwise we’re going to end up on the wrong end, as we have so often.

But in the individual human picture, when we learned about Ali al-Nimr, I wrote the first piece about him, actually, on this whole crucifixion business. You know, we’ve come 2,000 years, and the big improvement the Saudis have made on crucifixion is they chop your head off first and then hang you upside down on your cross for three days pour encourager les autres, you know, to encourage other people not to do things. And so, we’re trying to tell the world more about it, because it’s such a closed society. A hundred seventy-one people are set to be executed, almost three-quarters of those for nonviolent offenses. Sixteen of them are Shia people, who, as with Sheikh al-Nimr, are protesting a lack of democracy. You know, these are not extremist people, they’re people who are merely protesting for more democracy. Sixteen of them are set to die, including several children. Ali is one.

AMY GOODMAN: So tell us who Ali is.

CLIVE STAFFORD SMITH: That’s his uncle. And Ali was 17 at the time, and his uncle said, “Come to the protest.”

AMY GOODMAN: And he’s Shia, too?

CLIVE STAFFORD SMITH: He’s Shia, mm-hmm. And so, his uncle tells him to come to the protest. Ali comes to the protest, and he’s then charged with the heinous offense of failing to show respect for the guardian, the guardian being the king, who’s apparently the guardian of all his good people. And this is what you get executed for—but not just executed, you get beheaded and then crucified. I mean, we just should not be doing business with these people. And I know we love oil, I know we love money, but we really need to have our morals above some of these things that are going on there.

AMY GOODMAN: Well, what about the U.S. relationship with Saudi Arabia, whether we’re talking about what’s happening inside Saudi Arabia or the Saudi bombing, the U.S.-supported Saudi bombing of Yemen right now? What about President Obama and Saudi Arabia?

CLIVE STAFFORD SMITH: Well, I mean, there are certain little things, like presidents should clearly be stopping this sort of barbarism. But there’s a much bigger picture. When you look at the extremism today we’re so worried about in the war of terror, you’re looking at something that the Saudis promoted for years. And you look around the Middle East and all the people we’ve supported over the years, we supported Saddam Hussein, we supported Gaddafi, we supported Assad, we supported all of these people. And we keep getting in bed with these dreadful regimes that are doomed to collapse, and by doing that, we alienate the opposition to those regimes and inevitably precipitate something worse in the end. If we could just stand up for our principles, instead of standing up only for our oil, I think we’d be far better off.

NERMEEN SHAIKH: But have the U.S. or the U.K. made any gestures to save Ali?

CLIVE STAFFORD SMITH: Well, I’ll say the U.K. had made a gesture to have a contract with the Saudis about how to run their prison system. And we went after them on that, because we said, “Look, how are you helping them? Are you helping them torture Ali al-Nimr? Are you teaching them how to crucify people better?” And so, we did embarrass them into getting out of that contract. And believe you me, that’s only the first step. We’re going to do them on a number of other things they’re doing next. The same is true in the U.S. I’m afraid the U.S. has a whole range of things where we’re giving the Saudis the weapons they’re using to destroy Yemen and turn Yemen into a far worse place. And, you know, again, those aspects of foreign policy are just idiotic and so contrary to America’s true interests.

“Where Does This End?”: After Drone Papers Leaks, U.K. Gov’t Has a Kill List of Its Own

NEXT“Where Does This End?”: After Drone Papers Leaks, U.K. Gov’t Has a Kill List of Its Own 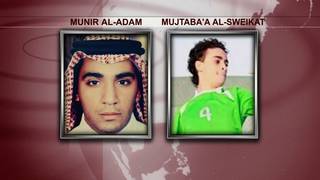