Report from Paris: With Manhunt on for Eighth Attacker, France Remains in State of Emergency

Authorities said they believed the Paris attacks were carried out by eight assailants, several of whom were French nationals, working in three teams. Seven of the men died in the attacks. A massive manhunt is underway for the eighth—Salah Abdeslam, a Belgian-born French national. Two of his brothers were said to have died in the attack. Authorities also said one of the suicide bombers who blew himself up outside the national stadium was carrying a Syrian passport and his fingerprints matched someone who passed through Greece in October. French authorities carried out 168 raids overnight, making 23 arrests, as part of the investigation. Police in the Belgian city of Molenbeek also carried out a series of raids this morning. We speak with Mira Kamdar, Paris-based member of The International New York Times editorial board, for more on the investigation and aftermath of the attacks.

AMY GOODMAN: A French pianist performing John Lennon’s “Imagine.” He pulled his piano up to the Bataclan theater, outside, just outside the theater where so many of the killings took place. This is democracynow.org, Democracy Now! I’m Amy Goodman, as we turn right now to Paris, France. Mira Kamdar is there, the Paris-based member of The International New York Times editorial board.

Mira, you’ve been writing quite a bit since these attacks took place. Can you share with us your thoughts?

But, you know, we are all in shock here. I just learned, actually, on my way to be with you this morning that a friend, a colleague of my husband’s, was killed in the Petit Cambodge restaurant, so this hits very close to home. It was eerie over the weekend traveling in the Metro on Saturday night, having no one there. There’s a lot of apprehension about what will come next, since there’s a Europe-wide search warrant on for the eighth terrorist attacker still at large, and no one knows what else may be in the offing.

There’s also concern—at least I have concern about the state of emergency that’s been declared. And apparently, the government intends to ask for it to be extended for an additional three months. That state of emergency gives the government sweeping powers, some of which we saw in action overnight. You mentioned the numbers of arrests and searches that had taken place. But there are other rights that are suspended in a state of emergency. So all of this is contributing to a feeling of apprehension in the wake of mourning.

MIRA KAMDAR: I am standing at an angle just a few hundred yards from the Bataclan nightclub in the middle of the Boulevard Richard-Lenoir. The police have blocked access from directly in front of the club, of course. I am surrounded by, I would say, dozens, at least, of television cameras from media around the world. I’ve really never seen so many cameras in my life. There are flowers and messages pinned all around the periphery, the police periphery of the club, in all different languages. It brings back to me memories of 9/11, of course, when there were candles and flowers all over downtown Manhattan.

AMY GOODMAN: Mira Kamdar, can you describe the places that were struck? Take us through what happened on Friday night, what you feel was the significance of the targets that were hit.

MIRA KAMDAR: All right. So, the targets were all in the sort of hippest part of Paris. Imagine the East Village of Paris, where there are lots of restaurants and nightclubs and cafés. And it’s a place where young people gather on the weekend. And these were most of the victims, were young people who were out having a drink, out having dinner—and, of course, the 89 and the many injured inside the Bataclan music concert hall. And the gunmen proceeded very methodically. They obviously knew the neighborhood, and it seems clear that they had planned their route, starting at a little family restaurant, Le Petit Cambodge, The Little Cambodia—which I know, where I’ve eaten—mowing people down, moving on from there to a café, Le Carillon. Then, you know, they split up. There was—I don’t know if initially, but at some point were split up into groups, the one heading for the Bataclan, and the other—others hitting an additional two restaurants.

At the same time or even slightly before, there were the explosions—turned out, suicide bombings—at the soccer stadium where the French and German soccer teams were playing. That’s a big game here. You can liken it to a big football game in the U.S. President Hollande was there. I understand that the German foreign minister was there. And it appears the intention of the suicide bombers was to get inside and cause much more mayhem than they were able to do, because they weren’t actually allowed in. So, sports, music, people going out—it was really an attack to make Parisians feel that they would not be safe anywhere, and an attack on the vibrant street life and public pleasures of this city that is famous for that.

AMY GOODMAN: Now, you, yourself, have a cousin who was killed in another attack in India?

MIRA KAMDAR: Yes, I do. My cousin, Reshma Parekh, and her husband, Sunil, were killed in very similar circumstances, actually, in the 2008 terrorist attack on Mumbai. They were waiting for a table at Tiffin restaurant in the Oberoi Hotel to have dinner, and they and many other people in the dining room were gunned down by machine gun fire, much as some of the people having dinner and having a drink on Friday night were gunned down here. And, you know, obviously, that stirred up painful memories for me.

AMY GOODMAN: I wanted to go to a quote in The New York Times coverage of what took place, France now entering the third day of mourning after 129 people were killed, 99 critically hurt. I wanted to go back to a quote at the beginning of this quote. This was in The New York Times. In an article in the Times, reporter Anne Barnard quotes the Lebanese doctor Elie Fares. He says, quote, “When my people died, no country bothered to light up its landmarks in the colors of their flag. When my people died, they did not send the world into mourning. Their death was but an irrelevant fleck along the international news cycle, something that happens in those parts of the world.” Can you respond to this, Mira?

MIRA KAMDAR: Well, sadly, you know, he’s absolutely right. And I credit The New York Times with having highlighted that. Even now, there are buildings around the world that are lit up with the colors of the French flag. Facebook has offered people to put the colors of the French flag on their profile pictures. I was on an India news show yesterday, and it was pointed out to me personally that the Shivaji Chhatrapati train station in Mumbai, which was the site of—one of the sites of the terrorist attack in 2008, was sporting the French colors.

What can I say? I mean, it’s—we still live in a postcolonial, imperial world. I think that it’s a tragedy that the kinds of attacks that have happened with such unbearable frequency in the Middle East and other parts of the world have become banalized, have become sort of, you know, something that people think is just sort of normal and that somehow the suffering unleashed there is not of the same order as could be unleashed in a city like Paris or on 9/11 in New York. At the same time, Paris is an emblematic kind of city. It’s a city that’s incredibly important for the entire Western world. Americans have a very romantic image of Paris. That kind of an image is shattered by an event like this, as it was in January. And so, it’s perhaps not surprising, even if regrettable, if the Western media responds inappropriately differently.

“We Shouldn’t Play into the Hands of ISIS”: Vijay Prashad on Danger of Military Escalation in Syria

NEXT“We Shouldn’t Play into the Hands of ISIS”: Vijay Prashad on Danger of Military Escalation in Syria 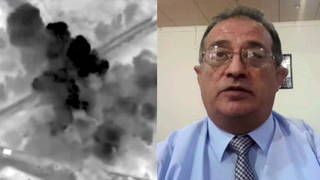