There are growing reports of Islamophobic attacks since Friday’s massacre in Paris. Just hours after the Paris assault, a caller left a voicemail laced with racial slurs for the Islamic Society of Pinellas County in St. Petersburg, Florida. The caller left his full name and threatened to “firebomb you, shoot whoever’s there on sight in the head.” Meanwhile in Pflugerville, Texas, residents found a torn Qur’an covered in feces left in front of the local mosque. In Canada, a mosque in Peterborough, Ontario, was set on fire in what authorities have called a hate crime. We discuss the attacks with Roula Allouch, national board chair of the Council on American-Islamic Relations.

AMY GOODMAN: Meanwhile, there are growing reports of Islamophobic attacks since Friday’s attacks in Paris. Just hours after the Paris assaults, a caller left this voicemail for the Islamic Society of the Pinellas County in St. Petersburg, Florida.

MARTIN SCHNITZLER: We’re tired of your [bleep], and I’m going to [bleep] personally have a militia that’s going to come down to your Islamic Society of Pinellas County, firebomb you, shoot whoever’s there on sight in the head. I don’t care if they’re [bleep] two years old or a hundred. I’m over your [bleep]. The whole country is. Check out Facebook. Check out postings. This attack in France is the last straw. And, you know, [bleep] you. [bleep] Allah. [bleep] your sand [bleep]. Get the [bleep] out of my country. And my name is Martin Schnitzler. Come find me, please. Please report me, because I would love, love it. You’re going to [bleep] die, Masjid Sunnah, or whoever the [bleep] your name is, you [bleep] sand [bleep].

AMY GOODMAN: A voicemail for the Islamic Society of Pinellas County in St. Petersburg, Florida. Again, we beeped as much as we could out of that horrific message, as he repeatedly talked about “sand-N” words. Meanwhile in Pflugerville, Texas, residents found a torn Qur’an covered in feces left in front of the local mosque. In Peterborough, Ontario, a mosque was set on fire in what authorities have called a hate crime. Roula Allouch, what are you calling for?

ROULA ALLOUCH: Yeah, I mean, we need—at this point, we need to unite. We need to stand united as people and not allow fear and hate to take over and to sacrifice our American values and principles. Really, in doing so, we would be allowing the extremists and the people that we’re fighting against to win.

AMY GOODMAN: Roula, in the case of the Florida call—

AMY GOODMAN: —he actually identified himself. What is happening at the Masjid, at the mosque? What are they doing? How are they protecting themselves? And do you feel that the law enforcement response is adequate?

ROULA ALLOUCH: So, our CAIR Florida team has been working with the people at the mosque down in Florida, and law enforcement has stepped up to review. I mean, as you said, the person felt comfortable and safe to provide his name. And I think that reflects a disturbing increase in Islamophobia and a disturbing increase in what appears to be acceptability of that type of rhetoric and hate being spewed. And it certainly doesn’t help when elected officials seem to be following that same line of hate and speaking out in ways that are contrary to American values.

AMY GOODMAN: Well, Roula Allouch, I want to thank you for being with us, national board chair of the Council on American-Islamic Relations, known as CAIR.

That does it for our broadcast. Democracy Now! is hiring a development director to lead our fundraising efforts, also an on-air graphics operator. You can go to our website at democracynow.org. 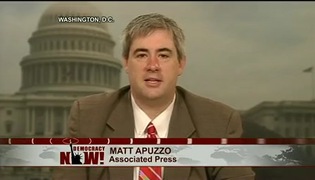