We speak to Rafael Bernabe, a professor, sociologist, historian, politician and a leading voice of the left in Puerto Rico. He ran for governor in 2012, representing the emerging Working People’s Party in Puerto Rico.

JUAN GONZÁLEZ: Well, Puerto Rican officials appeared before the Senate to push lawmakers to allow the U.S. territory access to Chapter 9 of the Bankruptcy Code. Puerto Rican Governor Alejandro García Padilla has said the territory’s debt of more than $72 billion is not payable, and he outlined a five-year plan to address the debt crisis. That plan includes raising tuition at the University of Puerto Rico, cutting investment in healthcare and contracting for-profit companies to run public road and ports. In return, the plan calls for debt restructuring that would require hedge funds and other creditors to voluntarily accept reduced payments. Padilla called on the hedge funds to come to the negotiating table.

GOVERNOR ALEJANDRO GARCÍA PADILLA: [translated] Now, the most important conclusion from this plan is that even if we impose all the measures in it, it would not be sufficient to meet the needed equilibrium. The massive public debt of Puerto Rico is an impediment to growth. That’s why the time is now that the creditors come to the table and share the sacrifice.

Well, for more on the economic crisis in Puerto Rico, we’re joined by Rafael Bernabe. He is a professor, sociologist, historian, politician, leading voice of the left in Puerto Rico, ran for governor in 2012 representing the emerging Working People’s Party. He has co-written several books, including Puerto Rico in the American Century: A History Since 1898, and last year wrote a book in Spanish, Puerto Rico: Crisis and Alternatives.

RAFAEL BERNABE: I’m very glad to be here with you.

AMY GOODMAN: Explain this crisis to us.

RAFAEL BERNABE: Well, the immediate aspect of the crisis, of course, is a debt crisis, the very high debt that the Puerto Rican government has adopted over the years. But behind the debt crisis lies the economic crisis. The economy of Puerto Rico has stagnated for the last 10 years. It hasn’t grown. It has lost about 25—25, 20 percent of the jobs that existed in 2006 do not exist anymore. And behind that lies the increasing—diminishing effectivity of the government economic policy, the basis of which is what we call the policy of tax exemption—the notion that you are going to attract U.S. investment to Puerto Rico by offering them no or very low taxes.

The government, over the years, instead of re-evaluating this tax exemption policy, which does not generate growth and allows these profits to leave the island, instead of reconsidering this policy, has preferred to borrow an ever-increasing amount of money. So now we have a double crisis: We have the debt crisis, and we have the economic crisis. We think that you cannot get out of the economic crisis if, among other things, you do not re-evaluate the tax policy that I just summarized.

JUAN GONZÁLEZ: Well, but a lot of these economists who have been putting together papers in the U.S. analyzing what’s gone on in Puerto Rico are claiming that basically there has to be more austerity, restructuring. They especially point to the decline in the population, the fact that many public schools no longer are at capacity, and they’re basically urging a shrinking of the public school system in addition to increased tuition at the university. What’s your response to that?

RAFAEL BERNABE: Well, I think, from the—let us say, the official sectors in Puerto Rico, the more powerful sectors in Puerto Rican society, there are basically two programs at conflict right now. One of them is the program of the creditors. It’s very well expressed in some of the documents they have produced. One of them is called “For Puerto Rico, There is a Better Way.” It’s a document you can find in the Internet. And it basically argues that the debt of Puerto Rico should not be renegotiated, it has to be paid in full. And in order to pay that debt, you have to impose very severe austerity measures, such as, you mentioned, closing schools, reducing the coverage of the health—public health insurance, increasing the cost of university education, reducing government employment, privatizing certain government agencies, selling off government property, so on and so forth. These policies would only increase the poverty of many people in Puerto Rico, and it would also perpetuate the economic crisis we have right now.

The position of the government is that the debt has to be renegotiated, but unfortunately they mix that with their own austerity policies. So on that field, they are not different from the creditors. They want to impose severe austerity measures. And furthermore, their economic policy relies on an attempt to revive the tax exemption policy that I mentioned before, to go back to the way it was in the early—up until 1996, when you had both federal and local tax exemption. They tried to revive that model. So, we think that it’s an exhausted model. It’s not going to generate economic growth in Puerto Rico. The austerity measures are going to perpetuate the present economic crisis. So whatever relief they get on the debt side of the equation, it’s going to be annulled by the impact of these very severe austerity measures and this rather recycled and exhausted economic policy.

JUAN GONZÁLEZ: And I wanted to ask you what Puerto Rico’s status has to do with all of this, because obviously in Congress now there’s an effort to get Chapter 9 bankruptcy available in Puerto Rico, because Puerto Rico is not treated like the other states, so it doesn’t have a clear path, legal path, out of its current quandary. And yet, at the same time, it’s not a country, that can formulate its own policies, devalue its money, for example, to get out of an economic crisis like this. So it’s caught in this limbo of being a U.S. possession but not a full state.

RAFAEL BERNABE: Well, that definitely is part of the problems that we have, and we have to address. But although I have to say that one—I think one does too much of a favor to the present government by arguing that since Puerto Rico is a colony of the U.S., nothing can be done. I think that even within the existing framework, there are many things that the Puerto Rican government could do and doesn’t do. For example, it could tax some of the profits that now leave Puerto Rico. Even some legislators of the ruling party in Puerto Rico today, the Partido Popular Democrático, have presented legislation that would tax some of these profits, recuperate them for the Puerto Rican economy.

The Puerto Rican government could take a far more, I would say, firm stand in terms of the need for debt relief. Basically, the position right now has been very timid. They are hoping that Congress will extend Chapter 9 to Puerto Rico. They are hoping that the creditors will come to an understanding that is adequate to Puerto Rico. But what if Congress doesn’t act? What if the creditors do not understand the needs of the Puerto Rican people? Basically, there doesn’t seem to be a Plan B. We think the Puerto Rican government has to take a much more firm stand, saying, “We wish to renegotiate the debt. We need to renegotiate the debt. But if necessary, we will suspend payments, if continuing the payment of this debt would imply imposing unacceptable sacrifices on the Puerto Rican people.”

AMY GOODMAN: Let me ask you if you have a critique of what the U.S. has done in Puerto Rico and if you think there should be reparations and what debt forgiveness would look like.

RAFAEL BERNABE: Yeah, I think reparations is a very interesting concept to use in Puerto Rico. And I, as a historian, am always—I always remember there’s a sort of a precedent for this. In the 1930s, Vito Marcantonio, who was a progressive congressman from New York, who was very much interested in the situation of Puerto Rico, presented an independence bill and a bill to allow Puerto Ricans to vote whether they wanted to be independent or not. But interestingly enough, it included the notion that the United States could not simply, if Puerto Ricans wanted to be independent, give them independence. It also had to repair some of the damage done through the economic consequences of the U.S. presence in Puerto Rico. And I think that’s an important issue.

JUAN GONZÁLEZ: And the particular role of Puerto Ricans in the United States and Latinos? More than half the Puerto Rican population—

JUAN GONZÁLEZ: —is now in the United States, not in Puerto Rico. Their role in this crisis?

AMY GOODMAN: Finally, you did run for governor on the Working People’s Party.

RAFAEL BERNABE: Well, that question, we all—all of us who belong to the Working People’s Party have to answer that question in a dual fashion. That is to say, we have to explain our own personal perspectives and the position of the party. Why do I say that? I personally am—I favor independence. In fact, I am a socialist. I think that, ultimately, the solutions to the problems of Puerto Rico, and not only Puerto Rico, require transforming our society in—

AMY GOODMAN: Rafael Bernabe, thank you very much for being with us, a professor, sociologist, historian, politician, leading voice of the left in Puerto Rico, ran for governor in 2012 representing the emerging workers’ party in Puerto Rico, has written a number of books, among them, Puerto Rico in the American Century: A History Since 1898. This is Democracy Now! I’m Amy Goodman, with Juan González. Thanks so much for joining us. 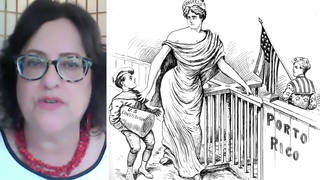