Democratic presidential candidates Hillary Clinton and Bernie Sanders have voiced support for President Obama’s plan to keep U.S. troops in Afghanistan through the end of his term in 2017. Obama had declared an official end to the U.S. combat mission in Afghanistan last year, but announced last month he was halting the phased military withdrawal. “I wish Bernie Sanders would be president, for many reasons,” says actor Viggo Mortensen. “I think in many ways he speaks truth to power, but even in foreign policy, in many ways, he is as hawkish as Hillary Clinton is.”

AMY GOODMAN: Well, it’s interesting, that period, in the fall of 2002, when you were speaking out, even as you were pushing your film, but making this larger point. At that time in 2002, at the end of it, Hillary Clinton stood up on the floor of the Senate, with many other Democratic and Republican senators, and voted to authorize the war in Iraq. Now fast-forward to 2015, and Democratic presidential candidates Hillary Clinton and Bernie Sanders have voiced support for President Obama’s plan to keep U.S. troops in Afghanistan through the end of Obama’s term in 2017. Obama had declared an official end to the U.S. combat mission in Afghanistan last year, but announced last month he’s halting the phased military withdrawal. Speaking on CNN, Hillary Clinton backed Obama’s decision.

HILLARY CLINTON: I will not sit here today and say what I would do upon taking office, because, again, we want to bring our troops home. We certainly don’t want them engaged in on-the-ground combat. We want them to help support and train the Afghan army, and we want them to, you know, continue to work with the government of Afghanistan to try to help strengthen security for them. So I can’t predict where things will be in January of 2017, but I support the president’s decision.

AMY GOODMAN: So, there is Hillary Clinton today in 2015. As you watch this, Viggo Mortensen, your thoughts on the presidential campaign and on the new Clinton who is running for president?

VIGGO MORTENSEN: Well, the new Clinton, which is not all that new, as far as ideas when you talk about foreign policy, certainly, she’s the likely Democratic nominee. And I don’t expect that she nor any of the Republican candidates are going to talk in any detail or with any profundity about what happened in 2002, 2003, you know, and certainly they’re not going to talk about Iraq. I mean, Trump has thrown a few firecrackers at Jeb Bush to try to get a rise out of him. The subject of what our government did and what we as citizens allowed to happen in 2003, and the consequences that we are living with now, is not going to be a topic of conversation, really, I don’t think, in the presidential campaign.

I mean, I wish that Bernie Sanders would be president, for many reasons. I think in many ways he speaks truth to power. But even on foreign policy, you know, I mean, he’s a person who, as a senator, has voted for every military appropriation, has voted for every, you know, resolution, pro-Israel government resolution, without question. In many ways, he’s as hawkish as Hillary Clinton is. So, you know, I don’t have a problem with—

AMY GOODMAN: What would you say to him about Israel?

AMY GOODMAN: You wrote a poem in Twilight of Empire, and when we come back, we’d like to also have you read that, as well as talk more about world politics. Yes, we’re talking about the world-renowned actor, Viggo Mortensen, who also happens to be the editor, a publisher. He’s the editor of Perceval Press, which has just reissued its 2003 book, Twilight of Empire: Responses to Occupation. We’ll be back with him in a moment.

AMY GOODMAN: Patti Smith singing “People Have the Power.” She’s performing at Beacon Theatre in New York on November 10. This is Democracy Now!, democracynow.org, The War and Peace Report. I’m Amy Goodman, with Nermeen Shaikh. Our guest for the hour—is choking me up right now—is the world-renowned author, Viggo Mortensen. But he is an actor, he is a publisher, he is a poet, he is a photographer and an artist. Nermeen?

VIGGO MORTENSEN: Not surprising. As I say, he’s—you know, for all the good things he does, he’s also very hawkish and not really different than Hillary Clinton in that regard, or any of the Republicans.

AMY GOODMAN: How is he different?

VIGGO MORTENSEN: He’s not, really. I mean, the one thing that I think Hillary has been using and will continue to use is the gun—you know, the gun thing in this country, gun laws and what Bernie’s track record is in Vermont. You know, I mean, I’m someone who was raised hunting with my father and so forth, so I’m not as troubled by his stance. I mean, he is for gun control, in a sense. And in a lot of ways, he is someone who people who want something done about gun control can feel good about. But he also looks at people who live in rural areas and hunting and so forth like that. I’m less troubled about that. I’m much more troubled about his warlike stance, you know, that is not really any different than—but that’s not going to be talked about, any more than what really happened in Iraq and what it means today. That’s not going to be talked about.

Acclaimed Actor Viggo Mortensen on the Pope, Poetry and Art in Politics

NEXTAcclaimed Actor Viggo Mortensen on the Pope, Poetry and Art in Politics 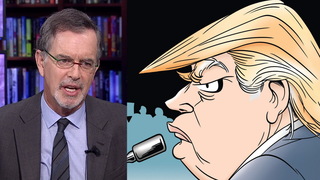