We Do Not Want to Be an Accomplice: Nicaragua Rejects Global Consensus on Voluntary Emission Cuts

On Monday, President Obama praised fellow world leaders for submitting voluntary pledges to cut greenhouse gas emissions. “Already, prior to Paris, more than 180 countries, representing nearly 95 percent of global emissions, have put forward their own climate targets,” Obama said. “That is progress. But a handful of nations are refusing to make pledges.” We speak to Nicaragua’s chief climate negotiator, Paul Oquist, about why his country refused to submit a pledge.

PRESIDENT BARACK OBAMA: Already, prior to Paris, more than 180 countries, representing nearly 95 percent of global emissions, have put forward their own climate targets. That is progress. For our part, America is on track to reach the emissions targets that I set six years ago in Copenhagen. We will reduce our carbon emissions in the range of 17 percent below 2005 levels by 2020. And that’s why last year I set a new target: America will reduce our emissions 26 to 28 percent below 2005 levels within 10 years from now. So our task here in Paris is to turn these achievements into an enduring framework for human progress—not a stopgap solution, but a long-term strategy that gives the world confidence in a low-carbon future.

AMY GOODMAN: While more than 180 nations have pledged to voluntarily reduce emissions, many scientists say far more needs to be done to keep global warming in check.

We’re joined now by two guests. Paul Oquist is Nicaragua’s chief climate negotiator. Nicaragua is one of 11 countries not to submit a pledge to cut emissions. Also with us is Meena Raman, climate change coordinator for the Third World Network. She’s also honorary secretary of Friends of the Earth Malaysia.

We welcome you both to Democracy Now! So, Mr. Paul Oquist, what is happening here? Why is Nicaragua not participating? Why didn’t you submit voluntary standards for your country?

AMY GOODMAN: Even “common and differentiated” is a term that is not commonly used.

AMY GOODMAN: Can you explain, for a moment, when you say you’ve gone—you’re going to 90 percent, what are you changing? What’s happening in Nicaragua?

PAUL OQUIST: We have a contract with a Brazilian consortium for 323 megawatts of hydroelectric that will take us to 90—there are some smaller projects also. But we went from 25 to 52 percent with geothermal power from the volcanoes, wind power, and now sun power, because the solar panels are kicking in, too. Last year, we had a saving of 2.1 million tons of CO2 because of our shift to renewable energy. And our actual emissions were 4.8, so it’s quite significant. Plus, we’ve committed to 11 million tons in our forestry sector that we will cut in the next five years. So that’s over two years of emissions. And the Grand Interoceanic Canal that we’re building represents 32.5 million tons per year of saving for the maritime commerce. So, really, Nicaragua’s house is in order in terms of mitigation. But we’re on planet Earth, and we have to keep this genie in the bottle. We have to achieve the objective of 1.5-degree increase in this century, or, at worst, the 2 degrees. And what does this process in Paris lead to? Three degrees. And 3 degrees, in our country—

AMY GOODMAN: In the world.

PAUL OQUIST: In the world. Twenty countries have 78 percent. So you can see it’s only 72 to 78, adding 10 more on. But they have also 76 percent of the world’s gross income. A hundred countries have 3 percent.

AMY GOODMAN: So, wait, you’re saying they have that much of the world’s gross income, so they can afford.

AMY GOODMAN: And what is that? When you say “level of ambition,” “ambition” is a big term here. But what do you want them to do?

PAUL OQUIST: They cut their CO2 and other greenhouse gas emissions more, to reforest and get more sinks through forestry and bamboo and other ways of the CO2 sinks. And then fuel efficiency is another thing that can be done. But their contributions, their commitments are not enough to limit to 2 degrees. Right now we’re looking at a 3-degree world, and that is catastrophic and unacceptable.

I would just like to point out that last week, Mr. Michel Jarraud, the executive director of the World Meteorological Organization, stated that we’ve reached 1 degree above the preindustrial level. We have 400 parts per million of greenhouse gases. And at 1 degree, what do we have? We have all of the ice in the world melting—the Arctic, the Antarctic, Greenland, mountain glaciers. We have drought, four-year droughts in Southern—in California, in Southern United States, in southern Iberia, southern Africa, southern Australia. You can see a pattern there, the southern edges. We have the strongest Niño in years, one of the four strongest since 1950, which is bringing drought to some areas and floods to others. And they also tell us that this is the hottest year ever, 250. This is with 1 degree. So, are we going to play roulette with the world’s future and let 3 degrees slip out of this Paris congress?

AMY GOODMAN: And just to be clear, 3 degrees Celsius is what? About 5.6 degrees Fahrenheit. 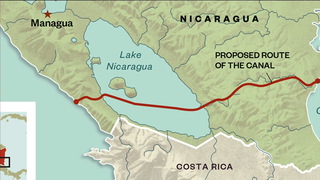