Climate activists in Paris are planning a major day of action on Saturday despite a ban on protests put in place by the French government after the Nov. 13 attacks that killed 130 people. “By taking to the streets, we will be clearly and unequivocally rejecting the Hollande government’s draconian and opportunistic ban on marches, protests and demonstrators,” says Naomi Klein, author of “This Changes Everything: Capitalism vs. The Climate.” We feature part of a major address by Klein at the U.N. climate summit.

AMY GOODMAN: We’re broadcasting from the U.N. climate change summit. It’s called COP21, here in Paris, France. Climate activists are planning a major day of action on Saturday, December 12, despite a ban on protests put in place by the French government after the November 13th attacks that killed 130 people. On Monday night, Naomi Klein, author of This Changes Everything: Capitalism vs. The Climate, spoke here in Paris about the climate negotiations and Saturday’s protest.

NAOMI KLEIN: The deal that will be unveiled in less than a week, likely to much fanfare and self-congratulation from politicians, echoed by an overly deferential press, will not be enough to keep us safe. In fact, it will be extraordinarily dangerous. We know, from doing the math and adding up the targets that the major economies have brought to Paris, that those targets lead us to a very dangerous future. They lead us to a future between 3 and 4 degrees Celsius warming. These are figures from the Tyndall Centre and Kevin Anderson, who have analyzed those numbers. It does not lead us to 2 degrees Celsius, which is what many of our governments pledged to do in Copenhagen in 2009. In 2009, dangerous warming was defined as anything above 2 degrees Celsius in a document known as the Copenhagen Accord. When a draft of that document was leaked to the convention center in Copenhagen, the Bella Center, African delegates marched through the halls of the convention center and called it a “death sentence for Africa.” And the island—low-lying island states held demonstrations, chanting “1.5 to survive.”

We also know, from leading climate scientists like James Hansen, that 2 degrees is just too high. Indeed, we know from lived experience that the amount we have already warmed the globe is too much. We are already living the era of dangerous warming. It is already costing thousands of lives and livelihoods, from the Philippines to Bangladesh to Nigeria to New Orleans and the Marshall Islands—I could go on and on. But it’s important to understand that language matters and that when we speak about dangerous warming as something that is far off in the distance, it is nothing less than, as my friend Kumi Naidoo put it yesterday, “subliminal racism.” And that racism is getting less subliminal every day. We are discounting lives when we speak that way, and we have to stop doing it.

So, given this context, we know that the deal that will be unveiled at the end of the week, on the weekend, is going to steamroll over crucial scientific red lines. We also know, from the paltry levels of financing that wealthy governments have brought to the table, that it is also going to steamroll over equity red lines, which means that wealthy countries that have been emitting fossil fuels on an industrial scale for a couple hundred years will continue to fail to do our fair share of emission reductions, sharing the atmospheric space—failing to share it—and we will continue to pay our fair share for the impacts of that, for loss and damage caused by climate change, and also the resources that are badly needed so that poorer countries can leapfrog over fossil fuels and the car culture, and go directly to renewable energy, community-controlled renewable energy, energy democracy, which is viable, as we’re seeing in countries like Bangladesh, and also leapfrog over car culture and go to modern, renewable-based public transit. It takes resources and technology transfers to happen. We also know that it’s going to steamroll over our legal red lines, because the U.S. has come to these negotiations announcing that the deal cannot be legally binding. Any talk of penalties was off the table before it even began.

Which is why on December the 12th at 12:00—that’s 12/12/12—many activists will be in the streets of Paris peacefully demonstrating against the violation of these red lines. We will also—we will also be mourning the lives already lost to climate disruption, in solidarity with the lives lost to the tragic attacks here in Paris, and enlarging that circle of mourning. By taking to the streets, we will be clearly and unequivocally rejecting the Hollande government’s draconian and opportunistic bans on marches, protests and demonstrations. We will be rejecting the shameful preemptive arrests of climate activists, the unprecedented restrictions on civil society inside the COP, the restrictions on free speech and movement, because liberté is not just a word and it doesn’t just apply to Christmas markets and football matches. Indeed, it means nothing if it does not apply to political dissent and the defense of life on Earth. This climate disobedience does not make us insensitive. It does not make us hooligans. It is our sacred duty to those suffering in the present day and who stand to lose so much if we fail in this race against time for climate justice. And let me also say this: I hope that the trade union movement and that workers in this city will stand with us on December 12th, because the right to assemble, the right to dissent, is central to all of our movements and all of our victories, past and future, parce que “la liberté” n’est pas qu’un mot. C’est un devoir qu’on doit defendre ensemble, et la solidarité aussi.

AMY GOODMAN: That’s Naomi Klein, author of This Changes Everything: Capitalism vs. The Climate, speaking Monday night here in Paris about the major day of action planned for this Saturday, December 12, despite the state of emergency.

“It Is Not Enough”: Despite Promise of New Aid, U.S. Urged to Take Responsibility for Climate Crisis

NEXT“It Is Not Enough”: Despite Promise of New Aid, U.S. Urged to Take Responsibility for Climate Crisis 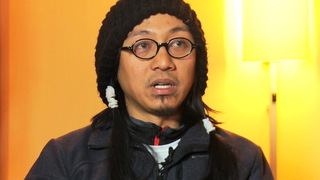