In 2013, Yeb Saño’s brother A.G. Saño was in the city of Tacloban, which was leveled by Typhoon Haiyan. A.G. Saño, a street artist, didn’t have credentials to enter the highly fortified U.N. climate summit, but Democracy Now! interviewed him offsite. “We painted murals that depict pilgrims walking around the world and leading towards Paris,” he said of the 900-mile journey to the climate summit. “And each one of those murals had a mythical figure, like a fairy godmother looking over nature, or Mother Nature herself looking over the world, and pilgrims walking on the Earth towards the Eiffel Tower. It is a message that says we’re willing to travel the world, we’re Filipinos, victims of the disastrous effects of climate change, but we’re willing to walk the world, even to go through snow, even if we have not seen snow before, just to get the message across.”

AMY GOODMAN: So I want to turn to your brother. Yeb Saño’s brother, A.G. Saño, was in the city of Tacloban, which was leveled by Typhoon Haiyan. Since A.G. doesn’t have credentials to enter this highly fortified U.N. climate summit, early this morning we talked to A.G. off grounds. He is a street artist who had been a landscape architect, and, together with his brother, Yeb Saño, the former chief climate negotiator, has been on this peace—People’s Pilgrimage. And he’s been creating murals as part of the People’s Pilgrimage across Europe. So I started by asking him to describe those days back in 2013 in Tacloban, the devastation of Typhoon Haiyan.

A.G. SAÑO: If I would have to give details about my experience, it would take eight hours, because that’s how long the horrors that we experienced in Tacloban. And if I would have to sum it into two words, it’s about helplessness and hopelessness, and devastated would be the perfect way to describe what I saw when I got out of the building in which I sheltered, which is one block away from the bay in the downtown area of Tacloban.

AMY GOODMAN: And describe what you saw.

A.G. SAÑO: I would like to describe first what was happening during the typhoon. I was imagining the eye of the storm was already passing through or passing by Tacloban, because it was the time when the building, which is an old building, was shaking really hard. It was like a two-hour earthquake. And people in the building were just crying and shouting and screaming and just waiting for the building to collapse. And at that moment, I was praying not for the lord to save me, but to allow my family to find my body, because I was already resigned to the idea that it will collapse and I would die right there. And in my mind, I was thinking maybe at that very moment hundreds, if not thousands, of people are dying because of the strong wind and the storm surge that came.

So when I got out of the hotel after the storm, I already saw dead bodies right there in front of the building. And I tried to go to the capital to find help, but I couldn’t reach the capital because of the fallen trees, fallen posts, cars on top of each other, trucks on top of other cars. And literally, there were dead bodies scattered all over. So I decided to find City Hall instead, but it was the same thing. And after about three blocks, I saw some firefighters picking up dead bodies, and I ended up helping out for that day. And the next day, I just decided to volunteer in the cadaver retrieval, so I did that for the next four days.

A.G. SAÑO: In the city, in Tacloban city.

AMY GOODMAN: And what did you do? You were picking up bodies?

A.G. SAÑO: Yes, we were picking up dead bodies, putting them on the truck. And we brought them to the grounds in front of the City Hall. It was the immediate, temporary space for the dead bodies, because we had to get them out of the streets because they were piling up really fast.

AMY GOODMAN: Can you talk about the murals that you’ve been painting from Rome to Paris along the way?

A.G. SAÑO: We had the chance of painting about six murals since we started walking in Rome and until we got to Paris. We painted murals that depicts pilgrims walking around the world and leading towards Paris. And almost each one of those murals had a mythical figure, like a fairy godmother looking over nature, or Mother Nature herself looking over the world, and there are pilgrims walking on top of the Earth towards the Eiffel Tower. It’s a message that says we’re willing to travel the world, we’re Filipinos, we’re victims of the disastrous effects of climate change, but we’re willing to walk the world, even to go through snow, even if we have not seen snow before, just to get the message across.

AMY GOODMAN: Has it changed you, this journey?

A.G. SAÑO: It has. It has. But one thing I realize is that this journey would bring me back to Tacloban, bring back the memories of Typhoon Haiyan. I wasn’t really prepared for that, but kept on coming. And images of the dead would constantly flash through my mind, as if they were talking to me and asking me for something.

AMY GOODMAN: Do you consider yourself a climate refugee?

AMY GOODMAN: If you could go into the climate summit, what would you say?

A.G. SAÑO: Well, to be brutally honest, I don’t really care about what’s happening in the COP, because if the world leaders really cared, it won’t take 20 years. It won’t take 20 years. They’ve been talking since the '90s, but what's really happening? I’m a person who would rather believe in the bottom-up process, where you can make change below. Like the people we met along the way from Rome to Paris, that’s where it begins—on the ground, in the grassroots. And it will go up, go up and up in different levels, if it presents a successful opportunity. But then, world leaders are only less than 200 in this world, but there are billions of other people who may be willing to listen and may be willing to change.

AMY GOODMAN: Is there anything else you’d like to add?

A.G. SAÑO: Well, I came here to bring the voice of my dead friend. I would like to—I’d just like to tell the world, tell the world the name of my friend. His name is Agit Sustento. Climate change is as real as Agit Sustento. I was with him the night before, and the last thing I told him was to take care of himself and his family, because that’s the strongest typhoon in recorded history that we’re about to face, and that was the last time that I ever talked to him. He lost his wife, his little boy, his mom and dad. His boy and his dad’s body were never found. And my promise to him is that I’ll tell the world about his name. His name is Agit Sustento, and he will never get to see the sun rise again.

AMY GOODMAN: That’s A.G. Saño, brother of former Philippines chief climate negotiator Yeb Saño, who is joining us here at the U.N. climate summit. Actually, Yeb, your brother A.G. was supposed to sleep over at his best friend’s house that night.

NADEREV ”YEB” SAÑO: That is right. That is right. And it was probably providential, and he didn’t want to burden the family with an extra guest that night, so he ended up sleeping elsewhere. And the whole family perished during the storm.

NADEREV ”YEB” SAÑO: Well, climate change is something that many people probably don’t understand, and they must understand, especially the leaders gathered here, that it is a very serious issue. In fact, it is the defining issue of our generation, and future generations will measure us. They will measure us by how we respond to this crisis.

AMY GOODMAN: Do you feel you’re more powerful as an insider or an outsider?

NADEREV ”YEB” SAÑO: I don’t really think about the power that I hold. I just think about what I can do as a person, how I can express an act of kindness and love to others so that we can have a better world.

AMY GOODMAN: Yeb Saño, thanks so much for being here with us. That does it for this broadcast. Yeb Saño has just walked more than 900 miles from Rome to Paris as part of the People’s Pilgrimage for climate action. 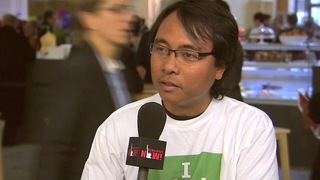