Billed as “the most trusted name in fake news,” Jon Stewart is stepping down as host of The Daily Show on Comedy Central. He has hosted the program since 1999. Watch his 2008 interview on Democracy Now! when Amy Goodman spoke to him at the Minneapolis airport ahead of the Republican National Convention in St. Paul. We also featured Stewart in 2010 when he and Stephen Colbert, then-host of The Colbert Report, led the massive rally to “Restore Sanity and/or Fear.”

StoryAug 21, 2017Dick Gregory in His Own Words: Remembering the Pioneering Comedian and Civil Rights Activist 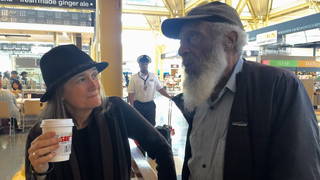 Dick Gregory in His Own Words: Remembering the Pioneering Comedian and Civil Rights Activist