One Billion Rising is the name of a global movement in more than 200 countries to end rape and sexual violence against women. The campaign highlights the startling statistic that one in every three women on the planet will be raped or beaten in her lifetime — over one billion women. This year’s theme is “revolution.” We are joined by two guests: V-Day founder and award-winning playwright Eve Ensler, creator of “The Vagina Monologues”; and Kimberle Crenshaw, a law professor at UCLA and Columbia University, and founder of the African American Policy Forum, whose new report is “Black Girls Matter: Pushed Out, Overpoliced and Underprotected.”

StoryFeb 26, 2010V-Day Founder Eve Ensler on “I Am an Emotional Creature: The Secret Life of Girls Around the World”

NERMEEN SHAIKH: One Billion Rising is the name of a global movement in more than 200 countries to end rape and sexual violence against women. The campaign was launched by playwright Eve Ensler, creator of The Vagina Monologues, and it highlights the startling statistic that one in every three women on the planet will be raped or beaten in her lifetime.

AMY GOODMAN: Eve Ensler joins us here in New York. We are also joined by Kimberlé Crenshaw, law professor at UCLA and Columbia University, V-Day board member, founder of the African American Policy Forum. Their new report is “Black Girls Matter: Pushed Out, Overpoliced, and Underprotected.” Before we go to Boston with Professor Crenshaw, Eve, talk about the organizing that has been going on, even leading up to Valentine’s Day, to V-Day.

EVE ENSLER: Dr. Martin—and she was quoting her father, and she said, “A social movement that changes people is a revolt. A social movement that changes people and institutions is a revolution.” And this year we’re seeing the deepening of One Billion Rising. We’re seeing restaurant workers who are rising to raise the minimum wage and end sexual harassment. We’re seeing vets rising across America to end sexual violence in the military. We’re seeing people throughout the world rising against poverty and contractual labor, farm workers rising against sexual harassment.

And I think one of the great things that’s happening this year is the risings are vast, in 200 countries, but they’re also multiple within countries. I got an email this morning that there’s a hundred cities in Italy alone rising. Thirty-four provinces—all of Afghanistan is rising. And I think what we’re seeing is a real tipping point in our movement, where the diversity, children, older people, men—we’re seeing the coming together of issues, whether it’s rising against the desecration of the Earth. Native American women are rising in the Bakken oil fields in North Dakota, looking at the connection between extraction and sexual abuse. And I think we’re really beginning to unite and come out of our silos and bring these movements together.

AMY GOODMAN: Can you talk about the report that you just came out with and how this relates to One Billion Rising?

KIMBERLÉ CRENSHAW: Well, we’ve been interested, in some time, in trying to address some of the specific obstacles that face girls of color. We’ve known for a while that there’s something called the school-to-prison pipeline. But for the most part, when the pipeline is discussed, it’s discussed primarily as something that affects boys. Recently, some numbers were released by the Department of Education that showed that in fact black girls, 12 percent of black girls, were actually suspended from school, and that that’s a rate that is multiple times more than white girls. So we decided we wanted to find out what was happening in New York and in Boston with black girls and what they told us. And we found some startling information.

Black girls are 10 times more likely to be suspended than white girls in New York, 11 times more likely in Boston. But equally importantly, what the girls told us was that they are suspended for things that white girls would not be, and sometimes for things that black boys would not be. So, they’re seen as defiant. They’re seen as aggressive. They’re seen as loud, rowdy. They say teachers see them as ghetto. So they’re facing specific kinds of stereotypes in the school that causes them to be suspended. And they also have burdens that no one else has. They’re the ones that take care of elderly people. They’re the ones that take their parents to the immigration office to translate. They’re the ones that look after little kids. So there are a lot of issues facing girls of color, black girls in particular. And we want to rise with One Billion Rising to lift those issues up, as well.

AMY GOODMAN: And so, Eve Ensler, in terms of how people can find out what’s happening in this country and around the world, where do you go on the website?

EVE ENSLER: You go to OneBillionRising.org. You can either create a rising or join a rising. There are thousands and thousands of risings around the world. And this year the theme is drumming, dancing, resisting. And I think, really, it’s important to think, in your community, what are the forms of violence that you are resisting, and to create your rising, because this is a locally owned, locally determined, globally connected movement that everybody is invited to join.

AMY GOODMAN: Well, I want to thank you both for being with us. Eve Ensler here in New York, the award-winning playwright and creator of The Vagina Monologues and V-Day, global movement to stop violence against women and girls, the campaign called One Billion Rising particularly poignant today, coming out of North Carolina and what has happened there. And Kimberlé Crenshaw, thanks so much for joining us. We will link to your report at democracynow.org, the report, “Black Girls Matter.”

We’re going to Colorado. We’ll be broadcasting from Denver Open Media on Friday. I’ll be speaking at the Iliff School of Theology tonight, Thursday, in Denver; tomorrow at Carbondale Public Library near Aspen.

V-Day Founder Eve Ensler on “I Am an Emotional Creature: The Secret Life of Girls Around the World” 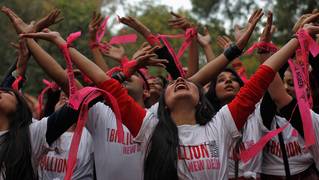 V-Day Founder Eve Ensler on “I Am an Emotional Creature: The Secret Life of Girls Around the World”