“Yippee! I’m a parolee!,” mentally ill prisoner Mark DeFriest said to his wife Bonnie DeFriest, as he began his path to freedom on March 10. He still still faces years in prison, but welcomed a 70-year reduction in his sentence.

As Democracy Now! reported in November during our interview with filmmaker Gabriel London, DeFriest is known as the Houdini of Florida prisons because he has tried to escape 13 times — seven of them successfully. In 1979, his father died and left him a set of tools, but he picked them up before they were probated. He was arrested for stealing and sentenced to four years in prison. During his trial, five out of six court-appointed psychiatrists testified DeFriest was highly intelligent, but also mentally ill and incompetent to be sentenced. But one doctor insisted he was faking. This cleared the way for DeFriest to plead guilty to a life sentence. Out of his 34 years in prison, he spent 27 years in solitary confinement, much of it in the notorious “X wing” of Florida State Prison, where he went for years without seeing the sun.

London is the director of the new documentary “The Mind of Mark DeFriest,” which debuts tonight on Showtime at 8:15 p.m. ET/PT.

He explained to Democracy Now! that DeFriest is now serving a 1-year parole-ineligible Florida sentence, and must still complete two out-of-state sentences totaling up to five years. Only if these sentences are commuted will he gain the right to, in his own words, “live with some semblance of a normal life.”

London has shown the film to the Florida Parole Commissioners and is on a “Countdown to Freedom Tour” that features the documentary and discussions with experts on prison policy toward the mentally ill.

See more about The Life of Mark DeFriest. 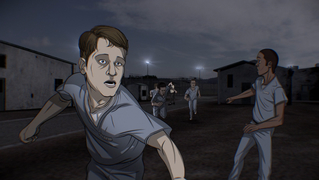