The author, filmmaker and media reform activist Danny Schechter has died of pancreatic cancer at the age of 72. Danny Schechter rose to prominence as the “The News Dissector” on Boston’s WBCN radio in the 1970s. He went on to work as a television producer at ABC’s 20/20, where he won two Emmy Awards, and at the newly launched CNN. But he left corporate media to lead MediaChannel.org and Globalvision. Schechter wrote 12 books, including “The More You Watch, the Less You Know,” and was a leading activist and journalist against apartheid in South Africa, making six nonfiction films about Nelson Mandela. He was a frequent guest on Democracy Now! over the years. The last time he was on the program, he discussed the life and legacy of Nelson Mandela.

AMY GOODMAN: We wrap up today’s broadcast with a remembrance.

JUAN GONZÁLEZ: Well, we end the show remembering the author, filmmaker and media reform activist Danny Schechter, who has died of pancreatic cancer at the age of 72. Danny rose to prominence as “The News Dissector” on Boston’s WBCN radio in the 1970s. He went on to work as a television producer at ABC’s 20/20, where he won two Emmy Awards, and at the newly launched CNN. But he left corporate media to lead MediaChannel.org and Globalvision.

AMY GOODMAN: Danny Schechter wrote 12 books, including The More You Watch, the Less You Know, and was a leading activist and journalist against apartheid in South Africa, making six nonfiction films about Nelson Mandela. Danny was a frequent guest on Democracy Now! Juan and I spoke to him in 2013 after the passing of Nelson Mandela.

DANNY SCHECHTER: Well, you know, I had the fortune of being at the London School of Economics in the '60s, at the right place at the right time, where the ANC people had come into exile. And in my class was remarkable woman, Ruth First, who became sort of my mentor about South Africa. And I was recruited by the ANC to go into South Africa. They couldn't get their people in because so many of them were in prison and well known to the security police. So, people from England, what were then called the “London recruits,” were sent into South Africa on various missions. I was one of them—naive, perhaps, to do this, unaware, really, of the consequences that awaited me if I was—if I was caught. But I went anyway as an act of solidarity.

I went to the funeral of the late Chief Luthuli, who was the leader of the ANC before Mandela. And I, you know, got an insight into how vicious the apartheid system was, how pervasive it was in people’s lives. It wasn’t just about race. It was about controlling people as labor, as a labor force in South Africa. This was always about economics, not just pigment. And Americans make the mistake of, you know, confusing what was happening in South Africa with the civil rights movement in America where people fought to have the Constitution apply to them. In South Africa, there was no constitution, and there were no rights for a majority, not a minority, of people. And so I experienced that upfront and personally, in a way, but it also kind of got me involved deeply in South Africa.

And years later, not only did I write about South Africa and was one of the organizers of the Africa Research Group in Boston, but I became active in a project called “Sun City: Artists Against Apartheid.” And, you know, just to supplement what Randall Robinson told you earlier, this was not all about lobbying Congress. This was about informing America about what was happening. And in some cases, it was cultural figures, 58 of the world’s top artists who indicted the system of forced relocation in South Africa. That’s what Sun City was all about. It was a part of an effort to promote a cultural boycott alongside an economic boycott. And it was very successful and worldwide in its impact. And I think that was important.

And then, you know, I helped start the TV series, South Africa Now, that ran for 156 weeks, every week, in the United States, reporting on South Africa through the eyes of South Africans. It was their story.

DANNY SCHECHTER: And it was on public television stations. PBS never really officially supported it, but many stations did. It was also on in 40 countries around the world throughout southern Africa. So it actually had a tremendous impact of bringing the message of the democratic movement to a world audience. And I think that was very critical. And then, of course, the documentaries.

And most recently, I was in South Africa documenting the making and the meaning of this new movie, Mandela: Long Walk to Freedom. And that movie will be in 2,000 cinemas in America starting Christmas Day. And, you know, it’s a very dramatized but important film about Mandela, in the way that the movie Gandhi was about Gandhi. But it leaves a lot out. And that’s why the producers of the movie asked me to write this book, Madiba A to Z: The Many Faces of Nelson Mandela, to talk about the rest of the story. And I did so by interviewing over 150 people who worked with Mandela, who were part of this whole struggle. And what I got from them was not only admiration for him, but also a perspective that this was not just one man, but a movement, that pulled this off, this change. And it was a movement that was organized in a democratic manner from the bottom up, not the top down. So, you know, even though we revere and admire Mandela, we have to also pay respect to the people of South Africa who suffered all these years—you know, torture, imprisonment, death—fighting apartheid.

AMY GOODMAN: That was Danny Schechter, “The News Dissector.” He was joining us in 2013. He has died of pancreatic cancer. You can watch the rest of that interview, as well as all of his appearances on Democracy Now! at democracynow.org. 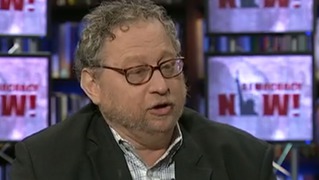