Known for his work chronicling the anti-apartheid struggle in South Africa since the 1960s, Danny Schechter has died after a battle with pancreatic cancer at the age of 72.

Schechter got his start as “The News Dissector” in 1970 at WBCN-FM in Boston. He went on to become a prolific television producer who won two Emmys. He was executive editor of MediaChannel.org, co-founder and executive producer of Globalvision production company, and the author of twelve books, including The More You Watch, The Less You Know.

Schechter made six non-fiction films about Nelson Mandela, including “Mandela in America.” In January he had just published, When South Africa Called, We Answered: How the Media and International Solidarity Helped Topple Apartheid. In 1988 Schechter created and executive-produced the weekly news program “South Africa Now” that aired on 75 public and cable TV stations. He also co-produced “Rights & Wrongs: Human Rights Television.”

Schechter was a frequent guest on Democracy Now! We last spoke to him on the show in 2013 about his book, “Madiba A to Z: The Many Faces of Nelson Mandela,” which he wrote in conjunction with the film, “Mandela: Long Walk to Freedom.”

In 2007, he first joined us to discuss his film, In Debt We Trust: America Before the Bubble Burst and returned as the subprime crisis fueled a financial meltdown. In 2010, he joined us on the release of his documentary about Wall Street called Plunder: The Crime of Our Time.

In 2011, Amy Goodman interviewed Schechter when he stopped by Occupy Wall Street. 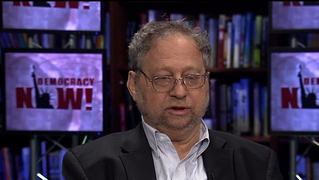