Indiana is facing boycotts and fierce criticism following Gov. Mike Pence’s new measure that could sanction discrimination by allowing business owners to refuse service to LGBT customers in the name of “religious freedom.” Connecticut is the first state to officially boycott Indiana over the move. Now San Francisco and Seattle have also imposed bans on city-funded travel to the state. Nine chief executive officers, including the heads of Angie’s List and Eli Lilly, wrote letters asking Indiana state officials to “take immediate action” to ensure the act will not sanction or encourage discrimination. On Saturday, thousands of people marched in Indianapolis calling for Pence’s resignation. Critics have called for a boycott, and some, including former NBA star Charles Barkley, are calling for the upcoming Final Four college basketball championship to be moved out of state. Supporters of the legislation have said 19 other states have similar laws and that Indiana is attracting undue criticism. Pence has said he will seek a new measure to “clarify the intent” of his new law, though he added that LGBT protections are “not on my agenda.” We are joined by Eunice Rho, advocacy and policy counsel for the American Civil Liberties Union.

AARON MATÉ: Indiana has come under fierce criticism after Governor Mike Pence signed into law a new Religious Freedom Restoration Act that could sanction anti-LGBT discrimination. It could allow business owners to refuse service to lesbian, gay, bisexual and transgender customers in the name of religious freedom. The move has drawn widespread outrage, with Connecticut becoming the first state to officially boycott Indiana over the move, followed by Washington state, San Francisco and Seattle. They have also imposed bans on city-funded travel to the state.

Nine chief executive officers, including the heads of Angie’s List and Eli Lilly, wrote letters asking Indiana state officials to “take immediate action” to ensure the act will not sanction or encourage discrimination. Tim Cook, CEO of Apple, the world’s most profitable company, slammed Indiana’s law, and others like it, likening it to the Jim Crow laws of the American South. Cook wrote in the The Washington Post that Apple would oppose the measure, saying, quote, “The days of segregation and discrimination marked by 'Whites Only' signs on shop doors, water fountains and restrooms must remain deep in our past. We must never return to any semblance of that time. America must be a land of opportunity for everyone.”

AMY GOODMAN: On Saturday, thousands marched in Indianapolis calling for Governor Pence’s resignation. And former NBA star Charles Barkley is calling for the upcoming Final Four college basketball championship games to be moved out of state. Speaking to ABC News, Pence refused to answer whether it will be illegal to discriminate against LGBT people.

GOV. MICHAEL PENCE: This is not about discrimination. This is about empowering people—

GEORGE STEPHANOPOULOS: But let me try to pin you—

GEORGE STEPHANOPOULOS: Let me try to pin you down here, though, on it, because your supporters say it would. And so, yes or no, if a florist in Indiana refuses to serve a gay couple at their wedding, is that legal now in Indiana?

GOV. MICHAEL PENCE: George, this is—this is where this debate has gone, with misinformation. And frankly—

GEORGE STEPHANOPOULOS: It’s just a question, sir. Yes or no?

GOV. MICHAEL PENCE: Well, well, there’s been shameless rhetoric about my state and about this law and about its intention all over the Internet. People are trying to make it about one particular issue, and now you’re doing that, as well.

AMY GOODMAN: That’s ABC’s George Stephanopoulos questioning Governor Pence, who now says he’ll seek a new measure to clarify the intent of his new law, though he noted LGBT protections are, quote, “not on my agenda.”

Welcome to Democracy Now! Talk about the significance of this so-called religious freedom law.

EUNICE RHO: Thank you so much for having me. So, Indiana is now the 20th state to pass the Religious Freedom Restoration Act, but it is different from where this debate originally began. As you may remember, in 1993, there was a federal law that passed Congress following a Native American who smoked peyote as part of his religious ritual and then was dismissed from his job and then denied unemployment benefits. He challenged that decision as a burden on his religious beliefs, and the Supreme Court ruled against the Native American religious believer. So, in response to that, Congress enacted the federal Religious Freedom Restoration Act.

AMY GOODMAN: This was under President Clinton. He signed off on it.

EUNICE RHO: This is under President Clinton, yes. And this—

AMY GOODMAN: And this is what Pence keeps citing: “We’re not doing anything different than Clinton did or 20 other states.”

EUNICE RHO: Right. And I have to be very honest and say the ACLU was part of that very broad and very diverse coalition. Fast-forward to 2015, we’re in a completely different context. This law, the Religious Freedom Restoration Act, in Indiana was introduced last year once the Legislature failed to pass a ban on same-sex marriage. They followed it up again in 2015, because they didn’t pass it last year. And this time around, the legislators swore up and down; the leadership said, “We are not intending for this law to be used to discriminate.” And so we said, “Great. We support religious freedom. We don’t want it to be used to discriminate, either. Let’s clarify this. Let’s put it in the bill.” And every single one of those amendments was voted down by the Legislature, that swore to us that they did not want this to be used to discriminate. And then, at the signing ceremony that Governor Pence held, he had two representatives from organizations that are widely known in the state of Indiana to be very anti-gay, and in fact justify their support of the Indiana Religious Freedom Restoration Act, justify their support, by saying that it can be used and it will be used to discriminate against LGBT people. So I think all of Governor Pence’s declaration, unfortunately, are refuted by the evidence to the contrary.

AARON MATÉ: What exactly could this law do? And what about the argument that Amy mentioned, which is that Pence says that 20 other states have this on the books?

EUNICE RHO: Sure. So, again, the context in Indiana being so different, and in terms of what the law can do, it allows anyone to voice a religious objection to any law or policy on the books and would require the court to resolve that dispute. But the test that the court has to apply is very stringent, and it is difficult for the defending party, because they have to show that whatever policy that is being challenged furthers a compelling governmental interest and applying that policy to the person who’s trying to challenge it is the only way of achieving that interest.

AMY GOODMAN: I want to talk about that picture you referred to of the private signing ceremony. The single graphic, writes GLAAD—that’s the group against gay and lesbian discrimination—one simple graphic, they say, shows the anti-LGBT animus behind Indiana’s law. They say that among those that were at this private signing ceremony were Micah Clark, Curt Smith and Eric Miller, and then they cited what some of them have said—Curt Smith equating homosexuality with bestiality and adultery, Eric Miller saying pedophilia is a sexual orientation on par with homosexuality. These are the men who are standing right next to Governor Pence in this private ceremony signing the bill.

EUNICE RHO: It is incredibly unfortunate that these are the people that he chose to represent in the photo that the Governor’s Office issued after its private signing ceremony. But I would like to point out, there is now a vigorous effort to try and mitigate the damage that’s been done to Indiana both economically and just reputationaly. There is an effort to update the existing state civil rights laws to include protections for LGBT people, and to update the Religious Freedom Restoration Act that has just been passed, as well, to ensure that it cannot be used to discriminate. And this is an ongoing effort. The Indiana Legislature has a month left in its session. I think Governor Pence and the Legislature have a real opportunity to fix this problem and ensure that Indiana is again open for everybody.

AMY GOODMAN: Is Arkansas next?

EUNICE RHO: Yes. The Religious Freedom Restoration Act in Arkansas has passed the Legislature. It is headed to the Governor’s Office.

AMY GOODMAN: The governor says he’ll sign. We’ll see what happens with—I mean, it’s not just the people that Governor Pence expected to be opposed to this. He has got the largest corporations in his state. He’s got the NCAA. He’s got major boycotts being announced by other states not sending, you know, workers, state employees, from Connecticut, on a public dime to Indiana.

EUNICE RHO: You know, I’ve been incredibly heartened, I think we all have been, by the public outcry, especially from the business community. I think this really signals a widespread understanding that LGBT equality is an American value that we should all uphold. And I’m especially encouraged by the fact that the CEOs were not just sending statements of support, but actually putting their money where their mouths are.

AARON MATÉ: And it signals that corporations have a lot of influence and power over politics and policy decisions.

EUNICE RHO: Absolutely. And I think the other states that are contemplating similar laws, like Arkansas or North Carolina or Nevada and elsewhere, really need to pay attention to Indiana. And their legislators and the governors in those states should understand that this is not what the—not only what the public wants, but it’s also not what is sound for their state economies.

AMY GOODMAN: Would it be solved by simply making LGBT people protected, that they can’t be discriminated against? Or does it simply need to be revoked? And should that happen in other states? Should the federal religious freedom law simply be overturned?

EUNICE RHO: I think one of the most encouraging parts of this dialogue is that it’s encouraging a re-examination not only of the Indiana law, but existing laws in other states. You know, in states that have LGBT protections statewide, they should consider updating their Religious Freedom Restoration Acts to make it crystal clear to the courts that their civil rights laws are not up for debate. These laws are not—should not at all be used to discriminate or harm against their state’s citizens.

AMY GOODMAN: We want to thank you, Eunice Rho, for joining us, advocacy and policy counsel for the American Civil Liberties Union. She works with the ALCU offices across the country in their lobbying and advocacy work on laws pertaining to religious freedom. And, of course, we’ll continue to follow what’s happening in Indiana and across states around this country. 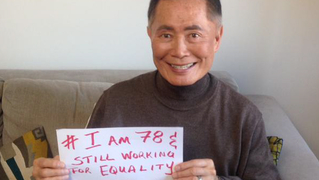