A major campaign is underway in Seattle against oil giant Shell’s plans to drill in the remote and pristine Arctic this summer. On Monday, hundreds blocked the entrance to the the city’s port, where Shell has docked its 400-foot-long, 355-foot-wide Arctic-bound Polar Pioneer drilling rig. On Saturday, about 500 environmentalists and indigenous leaders took to kayaks and small boats in a protest described as “Paddle in Seattle.” The Shell rig arrived Thursday even after Seattle’s mayor announced its permit as a cargo ship does not apply to oil rigs. Now the Seattle City Council has issued a notice of violation against Shell and could issue fines of up to $500 a day. All this comes after the Obama administration announced conditional approval for the company’s plans last week. We are joined by Seattle City Councilmember Mike O’Brien, who was among the hundreds of kayakers in Saturday’s action.

JUAN GONZÁLEZ: We end today’s show in Seattle, where a major campaign is underway against oil giant Shell’s plans to drill in the remote and pristine Arctic this summer. On Monday, hundreds blocked the entrance to the the city’s port, where Shell has docked its 400-foot-long, 355-foot-wide Arctic-bound Polar Pioneer drilling rig. On Saturday, about 500 environmentalists and indigenous leaders took to kayaks and small boats in a protest described as “Paddle in Seattle.” The Shell rig arrived Thursday, even after Seattle’s mayor announced its permit as a cargo ship does not apply to oil rigs.

AMY GOODMAN: Now Seattle’s City Council has issued a notice of violation against Shell and could issue fines of up to $500 a day. All this comes after the Obama administration announced conditional approval for the company’s plans last week.

For more, we’re joined by Seattle City Councilmember Mike O’Brien. On Saturday, he was among hundreds of kayakers who surrounded the rig for a Paddle in Seattle.

Welcome to Democracy Now! So, if the mayor is opposed, if the City Council says no, how is the Shell rig allowed to be at the port as a base of its operations for drilling in the Arctic, Mike O’Brien?

MIKE O’BRIEN: Well, the Port of Seattle is a separate governmental entity, and they apparently cut a deal to sign a contract with a contractor that’s contracting with Shell last fall and that only came out to public light in early January. There was a couple days’ notice, a short meeting. People showed up in protest. But by then, the deal was done, and the contract was signed in February.

Now, since then, there’s been a total outrage in the city of Seattle for this deal, and there may be an opportunity for the Port of Seattle to revisit that contract, at which point a lot of us are hoping that they reconsider their decision and don’t allow Shell to stay here.

JUAN GONZÁLEZ: And could you talk about your decision to join the protests?

MIKE O’BRIEN: Well, you know, Seattle is known as an environmental city, and I represent the people of Seattle, who are very committed to protecting our wild spaces, like the Arctic, and very committed to fighting climate change. And when you have a company like Shell, who knows that we already have three times more oil in the ground than we can safely burn without preventing catastrophic climate change, and they’re saying, “That’s not enough. We want to go drill more,” in a very—in an environment, frankly, that there’s no safe way to drill Arctic oil, that just goes against everything we stand for in this city. And when they want to bring their drilling fleet right into the waterfront of Seattle and store those ships and that 30-story drill rig, it just calls on all the people of Seattle, including myself, to go out there and say, “We cannot accept this. We need a better way, a new energy policy. And we need Shell to reconsider their option, too.”

AMY GOODMAN: Very quickly, can you talk about the notice of violation that the city, that Seattle, served on Shell?

MIKE O’BRIEN: So, as I said, the port’s a different entity, but they needed to get a permit from the city of Seattle to operate their terminal. We issued a permit about 20 years ago to operate that as a cargo terminal. Shell Oil hosting a—storing its oil rig there is not a cargo facility, and so they are now in violation of that permit. We’ve issued the notice earlier this week. They have a few days to get into compliance, which would largely mean removing the oil rig, or applying for another permit, which would take months to likely get. If they’re not in compliance in the next week or so, we have the right to start issuing fines. Unfortunately, the maximum fine is pennies for Shell Oil. It’s $500 a day.

JUAN GONZÁLEZ: Well, I also wanted to ask you about the Trans-Pacific Partnership, or TPP, the secretive 12-nation trade agreement which would stretch from Japan to Chile. On Tuesday, Secretary of State John Kerry visited Boeing’s 737 factory in Renton, near Seattle, to call for support of the TPP. I wanted to ask you what you thought about that.

MIKE O’BRIEN: Well, a little over a month ago, the City Council unanimously passed a resolution stating our opposition to fast-track authority for TPP and stating our very strong concerns about what we had heard is in that trade agreement. Now, it’s hard to fight against something that no one actually knows what’s in it because it’s very top-secret, but what I’ve heard and what we’ve all heard from every single environmental leader, every single labor leader, in the region and in the country, is that this is a bad deal for workers, this is a bad deal for the environment. And we think it’s just appalling that something like this would get fast-track authority to move forward.

AMY GOODMAN: And so, how does Seattle—how can you make a difference in Seattle as a city councilmember? And also, in this last minute we have, can you link these global trade agreements with the movement for better wages in the United States? Seattle was a leader in the $15-an-hour movement. You passed it, the City Council. Now Los Angeles has just announced they have passed $15-an-hour wage, that will be in place in 2020.

MIKE O’BRIEN: You know, we care a lot about our workers in Seattle. We’re a very trade-dependent state. So any type of trade agreement, we want to be very careful that it’s going to help the workers in Seattle, not hurt it. And frankly, the past number of trade agreements we’ve seen have undermined workers in our city and in our country. But we know there is a strong workers’ movement. It’s great to see what happened in Seattle now happening in Los Angeles and San Francisco, too. And we think this is a moment where workers are having their voice. And something like this international trade agreement, that’s cut in secret, undermines that movement that’s so powerful.

AMY GOODMAN: And the issue of the $15-an-hour minimum wage that you have spearheaded, the Seattle City Council, in passing, the significance of Los Angeles now doing the same?

MIKE O’BRIEN: You know, one of the things we heard when we passed our minimum wage was jobs will just leave Seattle, they’ll go somewhere else, no one will pay that. The reality of what we’ve seen to date and elsewhere is that people are still flocking to Seattle to open businesses. Workers are coming here, because they know they will be treated fairly. And when you see other cities following in—following in line with what Seattle did, I think it sends a strong signal that this is actually a wave of the future, not a mistake. And we’re really proud of being a part of that here in Seattle.

AMY GOODMAN: Mike O’Brien, we want to thank you for being with us, Seattle city councilmember who was part of the effort to stop Shell’s oil rig from docking in Seattle, part of the kayaks. And in March, he also led a unanimous vote on a resolution against the TPP. 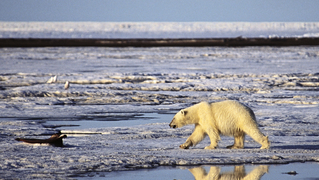