Image Credit: TVCA 39 via Reuters
This is viewer supported news. Please do your part today.
Donate

Thirty-five years ago, Archbishop Óscar Romero was murdered by members of a U.S.-backed death squad while delivering mass in San Salvador, El Salvador. On Saturday, over 300,000 people gathered in the same city to see him beatified, bringing him a step closer to sainthood in the Catholic Church. The recognition has long been opposed by right-wing clerics and politicians. During the ceremony, eight deacons carried Romero’s blood-stained shirt to the altar in a glass case. Archbishop Romero was shot through the heart while delivering mass at a hospital chapel on March 24, 1980. He was reportedly assassinated on the orders of U.S.-backed death squad leader Roberto D’Aubuisson, a graduate of the U.S.-run School of the Americas who went on to form the right-wing ARENA party. We go to San Salvador to speak with Roberto Lovato, a writer and a visiting scholar at UC Berkeley’s Center for Latino Policy Research.

StoryApr 23, 2021“Shelter from the Storm”: Climate Change Is a Driving Force in Central American Migration

AARON MATÉ: Thirty-five years ago, Archbishop Óscar Romero was murdered by members of a U.S.-backed death squad while delivering mass in San Salvador, El Salvador. On Saturday, over 300,000 people gathered in the same city to see him beatified. The recognition has long been opposed by right-wing clerics and politicians. During the ceremony, eight deacons carried Romero’s blood-stained shirt to the altar in a glass case. An envoy of Pope Francis lead the event in honor of a man known as a “voice for the voiceless.”

JESÚS DELGADO: [translated] We authorize that the venerable servant of God, Óscar Arnulfo Romero Galdámez, bishop and martyr, pastor, according to the heart of Christ, evangelizer and father to the poor, heroic witness of the reign of God, reign of justice, fraternity and peace, hereon shall be called beatified.

AARON MATÉ: President Salvador Sánchez Cerén, a former member of the left-wing rebel movement FMLN, spoke at the ceremony. The presidents of Panama and Ecuador also attended. President Obama sent a statement hailing the church’s new direction under Pope Francis, writing, quote, “I am grateful to Pope Francis for his leadership in reminding us of our obligation to help those most in need, and for his decision to beatify Blessed Oscar [Arnulfo] Romero.”

AMY GOODMAN: Archbishop Óscar Romero was shot through the heart while delivering mass at a hospital chapel March 24th, 1980. He was reportedly assassinated on the orders of U.S.-backed death squad leader Roberto D’Aubuisson, a graduate of the U.S.-run School of the Americas who went on to form the right wing ARENA party. This is an excerpt from the film Romero starring Raúl Juliá, who played Archbishop Romero.

ARCHBISHOP ÓSCAR ROMERO: [played by Raúl Juliá] I’d like to make an appeal in a special way to the men in the army. Brothers, each one of you is one of us. We are the same people. The farmers and peasants that you kill are your own brothers and sisters. When you hear the words of a man telling you to kill, think instead in the words of God: “Thou shalt not kill!” No soldier is obliged to obey an order contrary to the law of God. In his name and in the name of our tormented people who have suffered so much and whose laments cry out to heaven, I implore you, I beg you, I order you, stop the repression!

AMY GOODMAN: An excerpt from the film Romero, played by Raúl Juliá playing Óscar Romero, in one of those last addresses that Archbishop Romero would give before being gunned down.

Well, for more, we go to El Salvador to San Salvador, the capital, where we’re joined by Roberto Lovato. His family is from El Salvador. He’s a writer and visiting scholar at UC Berkeley’s Center for Latino Policy Research. He’s been reporting on Archbishop Romero’s beatification for The Guardian and Latino Rebels.

Welcome back to Democracy Now!, Roberto. Talk about what happened this weekend.

ROBERTO LOVATO: What happened, Amy, was basically a realization of what Monseñor Romero himself said before he died, where he said—because he knew they were going to kill him. That’s pretty clear from talking to people who knew him. He said that “If I am killed, I will rise again in the Salvadoran people.” And what happened on Saturday was precisely that, in a formal way, because people here will tell you that Romero was a saint for us here long before the church kind of caught up and did the beatification, which was held up by politics that included, for example, the—Zbigniew Brzezinski and the Carter administration kind of trying to get Romero to shut up in the 1980s. And then, from there on, the U.S. has not played a very kind of positive role here.

AMY GOODMAN: Can you talk about exactly what happened on that day when he was assassinated? Give us the politics of what took place. Who murdered Óscar Romero as he was giving his chapel sermon?

ROBERTO LOVATO: He was giving a chapel sermon in what’s known as El Hospitalito, a small chapel near a hospital here in San Salvador behind me. And he was, you know, doing what he always does: ministering to the poor. I mean, Romero was nothing if not somebody whose alpha and omega began with God and the poor. And he interpreted the gospel in those terms. And so, he was talking, and there had already been a plan hatched, Plan Piña, by Roberto D’Aubuisson and others, because—you know, one of the things that happens is people lose the story in thinking that Roberto D’Aubuisson was the only killer of Monseñor, when in fact there were people in Miami, there were people in different parts of the country, who are still around and still—people here want to bring them to justice, who were plotting his murder. And so, a car drove by, and an assassin fired a bullet straight into his heart. And he was killed, and he died, you know, not long after.

And he was tended to by Carmelite nuns. I mean, one of the most touching moments for me here, Amy, during the ceremony on Saturday was to see a Carmelite nun singing a song called “Sombrero Azul,” which was the kind of anthem of the revolutionary left in El Salvador. And the song says, you know, “And let the happiness come and wash away the suffering.” And at the end of the song—in the middle of the song, there’s a part that says, ”Dale Salvadoreño,” “Go Salvadoran.” And this four-foot-five Carmelite nun raises her fist and just had some of us in tears at that point.

So, Romero—Romero challenged the state to stop repressing people. But he went beyond that. I’ve been reading his homilies, listening to interviews and other things, and he actually—his gospel, his message, went far beyond simply stopping the repression. He called for—for example, he supported the nationalization of banks. He talked about los imperialistas, which was pretty much code for the United States. And so, we have someone now who in this country is—that’s now arguably the most violent country on Earth, in terms of homicides, becoming this massive symbol of peace. It couldn’t have come at a better time for El Salvador.

AARON MATÉ: And, Roberto, can you talk more about the politics behind this decision taking so long for this honor to happen and what this now means for El Salvador?

ROBERTO LOVATO: Well, you have basically the tale of two churches. I was in—on the weekend before the beatification, I was at a church, at the cathedral. And if you go to the cathedral, you see the tale of two churches playing out. On the top, you had a traditional mass that barely even mentioned Romero, being led by the archbishop of San Salvador, the current archbishop. Below, in the crypt of Romero, you had hundreds of people crammed up into this humid room, basically with—carrying pictures of their martyrs, carrying pictures of Romero, celebrating, singing and talking about justice and God in one voice. And so, that’s kind of the tale of two churches here.

And so, you have the conservative church hierarchy and the elites. You know, those that have continued the oligarchy from the 1980s, and been expanded into the financial sector, have joined forces to pressure the Vatican to not beatify Romero. They sent letters. They did what the U.S. has been doing while Romero was alive. Fortunately, that didn’t work. And as my friend Carlos Dada, a prominent journalist who wrote a good piece in The New Yorker, said, he said that, you know, this is a moral victory for El Salvador. So in terms of what it means for El Salvador, it means—it’s a moral victory. It’s a validation that—you know, your dead were there with Romero. There were people—they had read the names of the martyrs that have died, church people, non-church people, you know, 80,000 dead, 95 percent of whom were killed by the U.S.-backed government, according to the United Nations Truth Commission, 95 percent killed by—

AMY GOODMAN: Roberto Lovato, we have to leave it there, but I want to thank you for being with us, writer and visiting scholar at UC Berkeley’s Center for Latino Policy Research. We’ll link to his reports at democracynow.org, speaking to us from San Salvador. 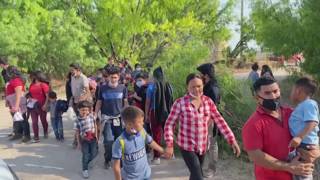