From the Vault: Amy Goodman on “The Orangeburg Massacre” 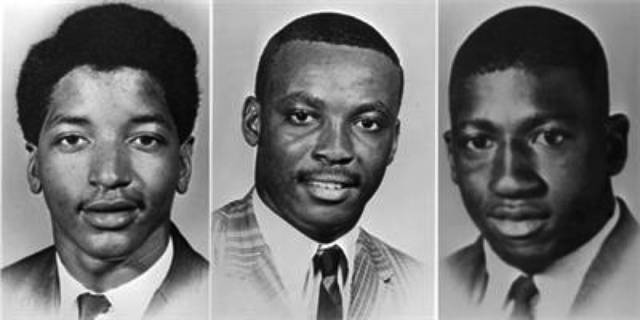 This column was originally published on April 17, 2008.

Sen. Barack Obama is clearly a bad bowler. The networks rolled the video clip of his gutter ball endlessly across our TV screens. It was an Internet favorite. The media served it, and the public ate it up. MSNBC’s Chris Matthews, the host of “Hardball,” hammed it up when interviewing Obama on the campus of West Chester University in Pennsylvania: Matthews: One of the perks, senator, of being president of the United States is that you have your own bowling alley. Are you ready to bowl from day one? Obama: Obviously, I am not.

It was Feb. 8, 1968, months before the assassinations of Martin Luther King Jr. and Robert F. Kennedy. It was more than two years before the massacre of students at Kent State University in Ohio. Students at South Carolina State University were protesting for access to the town’s only bowling alley. Cleveland Sellers, a student at the time at that historically black college, was also a member of the Student Nonviolent Coordinating Committee and an organizer of the protests. In a recent interview, he said about that night 40 years ago:

Sellers is now director of the African-American studies program at the University of South Carolina. His memory is vivid: “The darkness turned to light as the police opened fire, nine highway patrolmen and one local police officer firing rifles and shotguns and pistols. It was a shock to many of the students that there was no bullhorns, no whistles, no anything that indicated that this kind of extremely lethal action would be taken on these students.”

Survivor Robert Lee Davis recalled the event in an oral history project conducted by Jack Bass, who was a reporter at the time and now is a professor at the College of Charleston: “It was a barrage of shots … maybe six or seven seconds. Boom, boom, boom, boom, boom, boom, boom! Students was hollering, yelling and running. … I got up to run, and I took one step, and that’s all I could remember. I took that one step. I got hit in the back … this was when I got paralyzed. Students was trampling over me, because they was afraid.”

Sellers put the largely unreported and forgotten Orangeburg Massacre in context: “It’s ironic that here we are 40 years later, and the issue of poverty and the issue of war are still issues that are pertinent all around America again. And I think that it just says that in 1968, with the assassination of Dr. King and with the decline in the civil rights movement during that period, that a number of issues were left unachieved.”

There have been advances in the 40 years since the Orangeburg Massacre. Now, rather than protesting for access to a bowling alley, an African-American man is a leading candidate for the Democratic nomination for president of the United States, his bowling flubs merely the object of ridicule. But the three young African-American men murdered that night in Orangeburg—Samuel Hammond, Delano Middleton and Henry Smith—are not with us to share in the progress. They are hardly remembered at all.

The media this week recognize the one-year anniversary of the deadly shootings at Virginia Tech, in which a lone, disturbed gunman killed 30 students and faculty members. It is an important date on which to reflect. The Orangeburg Massacre deserves a place in our national consciousness as well. We need media that provide historical context, that offer more than a one-year perspective on our society. Instead, the mainstream media keep throwing gutter balls.

SPECIAL: Dr. Martin Luther King Jr. in His Own Words