Boston Marathon bomber Dzhokhar Tsarnaev has been formally sentenced to death for his role in the attack that killed three and injured hundreds in 2013. Addressing survivors inside the courtroom, Tsarnaev apologized for the first time, saying in part: “I am sorry for the lives that I’ve taken, for the suffering that I’ve caused you, for the damage that I’ve done.” Some of the bombing’s survivors have echoed a recent Boston Globe poll that found fewer than 20 percent of Massachusetts residents support sentencing Tsarnaev to death. We are joined by Bud Welch, who has become a leading anti-death penalty advocate after losing his daughter Julie in the 1995 Oklahoma City bombing. Welch is the founding president of Murder Victims’ Families for Human Rights.

NERMEEN SHAIKH: Twenty-one-year-old Dzhokhar Tsarnaev apologized for the first time Wednesday before he was formally sentenced to death for his role in the Boston Marathon bombing that killed three and injured hundreds. He said, quote, “I am sorry for the lives that I’ve taken, for the suffering that I’ve caused you, for the damage that I’ve done. Irreparable damage.” He added, quote, “I pray for your relief, for your healing.” This was the first time Tsarnaev had spoken in the courtroom since his arraignment two years ago.

During the sentencing, U.S. District Judge George O’Toole Jr. quoted Shakespeare, saying, “The evil that men do lives after them. The good is often interred with their bones. So it will be for Dzhokhar Tsarnaev.” Outside the courtroom, U.S. Attorney Carmen Ortiz addressed the media.

NERMEEN SHAIKH: Meanwhile, some of the bombing’s survivors echoed a recent Boston Globe poll that found fewer than 20 percent of Massachusetts residents support sentencing Tsarnaev to death. Henry Borgard said he opposed the death penalty, and responded to Tsarnaev’s statement.

HENRY BORGARD: I was actually really happy that he made the statement. I—as I said in my personal impact statement, I have forgiven him. I have come to a place of peace, and I genuinely hope that he does, as well. And for me to hear him say that he’s sorry, that is enough for me. And I hope, because I still do have faith in humanity, including in him, I hope that his words were genuine. I hope that they were heartfelt. I hope that they were as honest as the statements that you heard today in court from the victims and the survivors. I obviously have no way of knowing that, but I’m going to take it on faith that what he said was genuine. There was a little bit of rhetoric in there; I agree with what you said, absolutely. Some of it was hard to hear, you know? But I really—I was really profoundly affected, really deeply moved that he did do that, because, whether we like to acknowledge it or not, his statement, like ours, takes courage, because the entire world is watching us right now. And the fact that he made a statement, which he didn’t have to do, gives him a little bit of credit in my book.

AMY GOODMAN: That’s Henry Borgard. He was, at the time of the bombing, a 21-year-old Suffolk University student in Boston. He was hit by the second blast.

The judge rejected a request to move Dzhokhar Tsarnaev’s execution to New Hampshire, the only New England state with the death penalty, so survivors could more easily be on hand. Prosecutors say Tsarnaev will eventually be taken to federal death row in Terre Haute, Indiana.

Since 1963, the federal government has executed three people, including Timothy McVeigh, who was put to death in June 2001 for the Oklahoma City Federal Building bombing that killed 168 people. This year marks the 20th anniversary of the attack on April 19th, 1995.

Our next guest joins us from Oklahoma City. Bill Welch lost his 23-year-old daughter Julie in the attack there. After initially supporting capital punishment for his daughter’s killing, he has become a vocal opponent of the death penalty. He opposed the execution of McVeigh and is the founding president of Murder Victims’ Families for Human Rights.

Bud Welch, welcome back to Democracy Now! Your thoughts today? In Boston, we see the death sentence for Dzhokhar Tsarnaev. I think the poll said something like 80 to 85 percent of the people of Boston and all of Massachusetts were opposed to the death penalty, even in Dzhokhar Tsarnaev’s case. Can you reflect, as you dealt with this issue 20 years ago?

BUD WELCH: Hi, Amy. I can. You know, I’m reminded, every time something like this happens, that the punishment of the death penalty is nothing more than revenge. And I went through almost a year of revenge after Julie’s death, and—revenge and hate. And one cannot go through the healing process at all when you’re living with revenge. And that’s all the death penalty is, is revenge. It is not a deterrent. It doesn’t, as the media says, bring closure to family members.

There are a lot of victims’ family members here in Oklahoma City that I know, because I spent 13 years on the board of directors of the Oklahoma City National Memorial, and they were looking for the word “closure” at the time McVeigh was executed, on June the 11th of 2001. And I had been telling many of those people that the day that we would take Tim McVeigh from his cage and we would kill him would not be part of their healing process. And they learned that after his death. And many of those people have come forward now and said, “It was a mistake for us to kill Tim McVeigh,” because what it did was revictimize them all over again. One of the ladies, that had two little grandchildren that were killed in the day care center—and I will not mention her name, because the whole country knows her name—she has evolved so much that she is now on the board of directors of the Oklahoma Coalition to Abolish the Death Penalty. And that’s how it has changed her completely.

And I fully understand the people of Boston, how we have those that have already been able to come forward, they’ve had enough time to rationalize that the revenge of killing this young man is not part of their healing process. And we all go through that. And I always say the most important thing to people that have gone through such an event as that, the most important thing that they have is time. And we’re all on a different time schedule. And with enough time, we can finally go through the process.

NERMEEN SHAIKH: And, Bud Welch, you even went so far as to meet the father of the man responsible for the Oklahoma City bombing, and therefore responsible for your daughter’s death. Could you talk about meeting Timothy McVeigh’s father?

BUD WELCH: Yes, I met Bill McVeigh on, actually, September the 5th of 1998. I had been contacted by a nun from Attica prison that does ministry work there—in fact, she’s still doing that today. And she had requested that I come to the Buffalo-Niagara Falls area to speak against the death penalty, and I committed to going there for a week. And I had told her the story about seeing Bill McVeigh on television about two weeks after Julie’s death and how that I was—I really didn’t want to see the news program that had him on. But I sat and watched it, and I saw this man with a deep pain in his eye that I recognized immediately because I was living with that same pain at that same time. And I knew that someday I wanted to go tell that man that I did not blame him or his family for what his son had done.

And I had the chance to do that three-and-a-half years after the bombing. And I went and met Bill, met him at his house on a Saturday morning. And what I found was a very nice, gentle man. And he was sickened by the fact that his son had come back from the war in Iraq, and he had PTSD, had it badly, became very much antigovernment, joined militia groups. And he knew—he didn’t know anything that he could do about that. And I’m still in contact with Bill. I talk to him probably every six months.

NERMEEN SHAIKH: And, Bud Welch, what would you say now to the survivors and victims of the Boston Marathon bombing in light of the verdict, the death penalty verdict? What would you say to them now?

NERMEEN SHAIKH: And you actually suggest that the death penalty verdict—not only does it not help survivors heal, it actually prolongs their suffering. Is that right?

BUD WELCH: Well, sure, absolutely, because in McVeigh’s case, actually, he was not on death row that long, just a little over six years. But the reason that he was only on death row a little over six years is because he was a volunteer. He asked all of his—for all of his appeals to be stopped, and he asked for an execution date. And I don’t think that—if Tim McVeigh had not done that, I don’t think that we would have ever executed him. I think he’d still be alive today, because the federal government really did not want to kill Tim McVeigh.

AMY GOODMAN: We’re going to ask you to stay with us. We’re going to be talking about the fact, in our next segment, that far more white supremacists have killed more people since 9/11 than Muslim extremists in the United States. And we’d like you to weigh in on this, as well, Bud, having direct experience with being a victim, your daughter killed in the Oklahoma City bombing April 19, 1995, along with 167 others. Bud Welch, speaking to us from Oklahoma City. When we come back, we’re going to be joined by a former FBI special agent, Mike German, to talk about this new study. Stay with us.

Does U.S. Ignore Right-Wing Terror? More Killed by White Extremists Than Jihadists Since 9/11 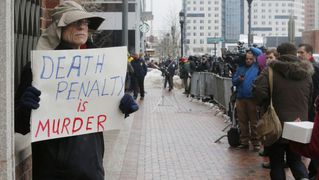