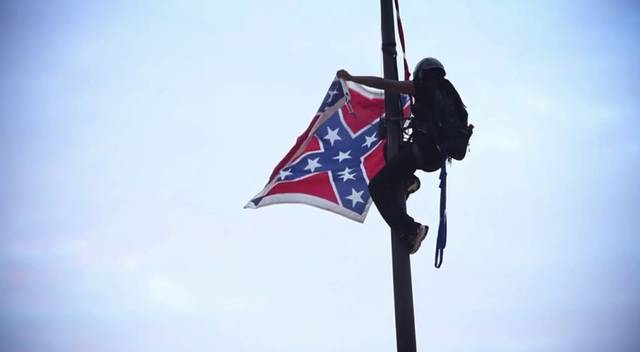 Update: Democracy Now! has confirmed Bree Newsome and James Tyson have been released.

For 15 years, the NAACP has called for the removal of the Confederate battle flag and has maintained economic sanctions against the state of South Carolina. The NAACP, Governor Nikki Haley, a bipartisan coalition of policymakers, an expanding number of American businesses, and a courageous young woman named Bree Newsome are all united in opposition to the Confederate flag. Ms. Newsome temporarily removed the flag flying in front of South Carolina’s state house. As well as supporting the permanent removal of the flag legislatively, we commend the courage and moral impulse of Ms. Newsome as she stands for justice like many NAACP activists including Henry David Thoreau, Dr. Martin Luther King Jr. and numerous Americans who have engaged in civil disobedience. The NAACP calls on state prosecutors to consider the moral inspiration behind the civil disobedience of this young practitioner of democracy. Prosecutors should treat Ms. Newsome with the same large-hearted measure of justice that inspired her actions. The NAACP stands with our youth and behind the multigenerational band of activists fighting the substance and symbols of bigotry, hatred and intolerance.”

Around 5:30am this morning Bree Newsome climbed to the top of the flagpole flying the Confederate battle flag on the grounds of the South Carolina state capitol, unhooked the flag, and brought it down as police waited to arrest her.

Calls to remove the flag intensified after last week’s mass shooting of nine African-American worshipers at the historic Emanuel AME Church. The flag has been the source of controversy for decades in South Carolina, but a growing number of politicians, including South Carolina Governor Nikki Haley, are calling for its removal after photos were published online showing the accused gunman, Dylann Roof, posing with the flag.

Newsome and others calling themselves “concerned citizens” released a statement explaining, “Deciding to do what the SC Legislature has thus far neglected to do, the group took down the symbol of white supremacy that inspired the massacre, continued to fly at full mast in defiance of South Carolina’s grief, and flew in defiance of everyone working to actualize a more equitable Carolinian future.”

The state Bureau of Protective Services confirmed Newsome and one other person were arrested. They are charged with defacing a monument, which is a violation of state law 10-11-315. The law has not been used since it was passed in 2000 during another push to remove the flag from the capitol. They face three years in jail and a $5,000 fine.

“At about 7:45 a.m., a maintenance worker and a state security officer, neither of whom would give their names or comment, raised a new banner after removing it from a plastic sheet. The two state employees who arrived on the State House grounds to put the flag back up were African-Americans.”

Watch all of Democracy Now!’s coverage of the Charleston church shooting and push to remove the confederate flag.

In the interview below, Kevin Alexander Gray, a South Carolina civil rights activist and community organizer says, “People’s tax dollars ought not go into supporting the idea of the Confederate States of America.” As former president of the state ACLU, he argued, “the flag flying on the statehouse dome was compelled speech. You were compelling people to support an ideology of white supremacy.” 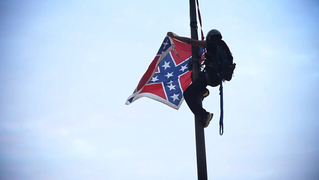