“A Sea Change”: With 100 Women in Congress, Lawmakers Go on Offensive with Landmark Pro-Choice Bill

In a landmark push to turn back the record tide of anti-choice restrictions, pro-choice U.S. lawmakers have introduced a bill to expand insurance coverage of abortion. The Equal Access to Abortion Coverage in Health Insurance Act, or EACH Woman Act, would dismantle the nearly 40-year-old Hyde Amendment, which bans federal funding of abortion, except in cases of life endangerment, rape or incest. The Hyde Amendment denies coverage of abortion to many of the country’s poorest women, who are disproportionately women of color. We speak with Rep. Barbara Lee (D-CA), lead sponsor of the bill. “In the past, we’ve just been on the defense constantly, just defending a woman’s right to choose, a woman’s right to privacy, Roe v. Wade. Well, now it’s about time we take the offense,” Lee says. “This is a major first step.”

NERMEEN SHAIKH: In a landmark push to turn back the record tide of anti-choice restrictions, pro-choice lawmakers have introduced a bill to expand insurance coverage of abortion. The Equal Access to Abortion Coverage in Health Insurance, or EACH Woman, Act would dismantle the nearly 40-year-old Hyde Amendment, which bans federal funding for abortion, except in cases of life endangerment, rape or incest. The Hyde Amendment cuts off funding for a routine medical procedure sought by one in three women, to members of the military and their families, federal employees, women in federal prisons, Peace Corps volunteers, Indian Health Service clients and Medicaid recipients. Research has shown one in four women on Medicaid who want to end their pregnancies instead give birth when the funding is unavailable. While a minority of states do provide Medicaid coverage for abortion, a number of states have gone beyond the Hyde Amendment, banning abortion coverage on any insurance plan or on plans sold through healthcare exchanges.

AMY GOODMAN: Dubbed “the third rail of abortion politics” by MSNBC’s Irin Carmon, taxpayer funding for abortion is an issue even pro-choice Democrats have hesitated to touch. In 2010, President Obama issued an executive order ensuring the ban on federal funds for abortion would stand under his signature healthcare law. But on Wednesday, Democratic Congressmember Barbara Lee of Oakland and her colleagues introduced the EACH Woman Act to repeal the ban and prevent political interference in abortion coverage by private insurers. Congressmember Lee spoke Wednesday along with other sponsors of the bill, including Congressmember Judy Chu of California and Congressmember Raúl Grijalva of Arizona. This is Congressmember Brenda Lawrence of Michigan.

REP. BRENDA LAWRENCE: Today, I stand as a member of Congress, one of the first in our history, having 100 women sitting in Congress. This is a time for leadership.

REP. BARBARA LEE: Politicians have no business interfering with a woman’s private reproductive health decision. The EACH Woman Act ends these political bans, whether they’re imposed at the state or federal level.

REP. JUDY CHU: Nearly one in seven women of reproductive age is insured through Medicaid. Half of Medicaid enrollees are people of color. Three in 10 young women are eligible for Medicaid. We know that this attack on poor women is an attack on all women. By denying federal insurance coverage of abortion, Hyde puts this access out of reach for so many. We cannot sit back and watch the constitutional right of women deteriorate any further. We have been playing defense for far too long, and it’s time to change that strategy.

REP. RAÚL GRIJALVA: This act that has been proposed is about reaffirming a woman’s right, period. And it’s about bringing up to a level standard the civil rights and the equity that every woman deserves in this country.

AMY GOODMAN: That was Congressmembers Grijalva, Chu, Lee and Lawrence. For more, we go to the Cannon Rotunda in Washington, D.C., where we’re joined by the sponsor of the bill, Congressmember Barbara Lee, former chair of the Congressional Black Caucus, lead sponsor of the Equal Access to Abortion Coverage in Health Insurance Act, known as the EACH Woman Act.

Congressmember Lee, welcome back to Democracy Now! Lay out what this legislation would do.

REP. BARBARA LEE: Well, thank you very much. First of all, let me just say, women around the country, and men, have said enough is enough. And what this legislation basically would do is remove the barriers and the bans on funding for reproductive healthcare, all the reproductive healthcare options which women with money have, which includes abortions. And so, finally, we have—and I’m so pleased that we had 70 co-sponsors who introduced this bill, along with myself, to just say, basically, enough is enough. We want equity. You know, the American people, regardless of their personal views on abortions, they believe that all women, regardless of their income, should be allowed the full range of reproductive options. And so, what this bill does is equalize this whole healthcare issue and really puts low-income women and women of color—you heard half of women on Medicaid are women of color—you know, it provides some equity in their whole reproductive healthcare decisions. And also what it does is take elected officials out of those personal decisions that women must make, which are very grueling oftentimes and very difficult.

NERMEEN SHAIKH: I want to read from a comment from Representative Henry Hyde, author of the Hyde Amendment. When it was first introduced in 1976, he said, quote, “I [certainly would] like to prevent, if I could legally, anybody having an abortion, a rich woman, a middle-class woman, or a poor woman. Unfortunately, the only vehicle available is the … Medicaid bill.” So, Representative Lee, could you talk about who was principally impacted by this amendment?

AMY GOODMAN: Congressmember Lee, what happens to women in the military?

REP. BARBARA LEE: Same thing. The VA women in the military are denied the full range of reproductive options. This bill would stop that. It would lift that barrier.

AMY GOODMAN: And how—what are the prospects for this bill moving forward in a Republican House?

REP. BARBARA LEE: Well, of course, we have to educate the public, which I believe are really there, but we have to let members of Congress know that the public—I think over 80 percent of the public really believes, regardless of their personal views, that there should be some equity and that low-income women should be treated fairly. And so we have a massive educational campaign to conduct.

But I’ll tell you one thing. Women all around this country—and I’m so proud of all of the young women, the organizations, who have been working for years and years and years on this legislation. Now we have 72 co-sponsors. Of course, we have a tea party-controlled, very conservative Congress, so we are not—we don’t have our heads in the sand. We’re not looking at the world through rose-colored glasses and believe that this could pass this year. But this is a long-term fight. This was in the '70s, when former Henry Hyde—the late Henry Hyde passed this. And so, we're going to begin now. We’re going to be very assertive. We’re going to educate members of Congress. And sooner or later, we’ll get this done. And so, this is a marathon. But it starts—it must start somewhere, so we’ve taken the very first step.

You know, in the past, we’ve just been on the defense constantly, just defending a woman’s right to choose, a woman’s right to privacy, the Roe v. Wade. Well, now it’s about time we take the offense and say, “Look, there’s got to be some justice and some fairness, as it relates to all women.” And so, this is a major first step. And we have no idea when it could pass, but we have to build that political support. And so, interviews like this and educating the public will really help us build that support. Thank you.

AMY GOODMAN: Do you think it has something to do with what was said when you introduced this yesterday, standing with a number of women and some male congressmembers, the idea that you have hit 100 women in Congress now?

REP. BARBARA LEE: Well, I believe it does. When we have that type of power—of course, we need more women in Congress. But when you have a hundred women, and when you have women who are at the table writing the rules, when you have women who really understand this from a deeply personal level, you know, I think things change, when you have women who really understand, regardless of their views, once again, on abortion, that elected officials, members of Congress, should not be making those decisions for women. These are very personal, difficult decisions. Let women decide where they want—how they want to live their lives and what their reproductive choices are. So, yes, I think getting to a hundred women in Congress really is a sea change. And again, we have now 72 co-sponsors on this bill, which is really very positive and very good for the movement that is developing. And I just have to give credit once again to all of our organizations and our young women around the country who have been working so hard on this for so many years.

The Next Steps on Cuba: Rep. Barbara Lee Pushes for End to Embargo & U.S Travel Restrictions 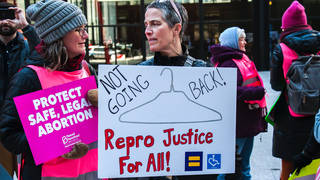