“These Should Not Be in America”: Democrats Aim to Remove Confederate Symbols from Federal Property

AMY GOODMAN: Finally, Congressmember Lee, the—looks like South Carolina is going to bring down the Confederate battle flag on the grounds of the state Capitol. Extremely emotional debate was held in the last few days in both houses. But it’s overwhelmingly been voted. Is there federal legislation that would take down any kind of Confederate symbols in any federal public lands?

REP. BARBARA LEE: Well, members of the Congressional Black Caucus are looking at a variety of bills. Congressman Bennie Thompson has legislation pending, specific legislation, and other efforts are taking place. But I’ll tell you, we’re looking at all aspects of symbols of hatred and racism and bigotry. These should not be in America. And so, you know, I’m very pleased and happy that Charleston and the South Carolina Legislature have finally gotten to this point. It took such a horrific tragedy, that we’re still grieving from and mourning from, and this is an example of how these horrible tragedies lead to change. But it should happen without having so many horrific acts of violence take place. And so, these symbols, such as the flag, that promote this kind of hatred, not only on federal lands or wherever, they should not exist in America. And so we’re looking at all aspects of this at this point.

AMY GOODMAN: Congressmember Lee, thanks so much for being with us, Democrat of California from Oakland, former chair of the Congressional Black Caucus, author of—co-author of the Equal Access to Abortion Coverage in Health Insurance Act, known as the EACH Woman Act, which would guarantee abortion coverage for all Medicaid recipients and women who receive health insurance through the federal government.

When we come back, did BP get off cheaply in the deal that’s been reached after the blowout in the Gulf of Mexico? Stay with us.

Did BP Get Off Cheaply? Antonia Juhasz on $18.7B Gulf Oil Spill Settlement

NEXTDid BP Get Off Cheaply? Antonia Juhasz on $18.7B Gulf Oil Spill Settlement 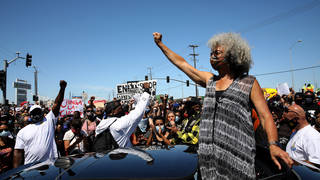