Trading with the Enemy: Homing Pigeons with Cigars Challenge U.S. Embargo, Fly from Cuba to Florida

As Secretary of State John Kerry prepares to fly to Cuba for a ceremony Friday to open the U.S. Embassy in Havana, we speak with an artist here at the Venice Biennale who used art to challenge the U.S. embargo of Cuba. For his project called “Trading with the Enemy,” Duke Riley spent four years planning and eight months breeding and homing a kit of 50 pigeons in Key West, Florida. His goal was to prove that pigeons could make the 90-mile flight from Havana back to Key West carrying Cuban Cohiba cigars, which are banned in the United States. Riley also installed video cameras on the pigeons. He began with 50 pigeons. Eleven returned.

AMY GOODMAN: We’re broadcasting from Venice, Italy. But Secretary of State John Kerry is heading to fly to Cuba for a ceremony Friday to open the U.S. Embassy in Havana, so we’re going to turn now to an artist who’s here in Venice who used art to challenge the U.S. embargo of Cuba. Duke Riley is with us, spent four years planning and eight months breeding and homing a kit of 50 pigeons in Key West, Florida. His goal was to prove that pigeons could make the 90-mile flight from Havana back to Key West carrying Cuban cigars, which are banned in the United States. Riley also installed video cameras on the pigeons. He began with 50 pigeons. Eleven returned. Duke Riley called the project “Trading with the Enemy.” Duke Riley joins us now here in Venice, Italy, at the Venice Biennale, the oldest, most prestigious art exhibition in the world.

DUKE RILEY: Thanks for having me.

AMY GOODMAN: Explain what you did. People are scratching their heads.

DUKE RILEY: Well, pretty much what you described. And I was pretty impressed that you used the word “kit.” That was pretty good. Yeah, so, basically, yeah, I trained—I spent about four years planning and about eight months training some homing pigeons to carry Cuban cigars from—

AMY GOODMAN: Wait. How did you do this? I mean, how do you train them?

AMY GOODMAN: So you released them in Cuba?

DUKE RILEY: I don’t really go into too much detail as to how the pigeons got into Cuba. But they did, yeah.

AMY GOODMAN: Now, what kind of cigars did you strap around each one?

DUKE RILEY: They were Cohibas, sort of the most coveted.

AMY GOODMAN: On each of these pigeons.

DUKE RILEY: And they were like sort of little harnesses that were made out of bra straps.

AMY GOODMAN: And cameras, as well?

AMY GOODMAN: And they flew to Key West, Florida?

AMY GOODMAN: Were you aware there’s a trade embargo? Were the pigeons?

DUKE RILEY: You know, I didn’t get into a very serious political discussion with the pigeons, but I was definitely aware of the trade embargo and with the—obviously, with the Trading with the Enemy Act. And that was definitely [inaudible].

AMY GOODMAN: So, how do you know the pigeons made it to Key West?

DUKE RILEY: Well, there was, you know, a loft that they were homed out of, and that’s where they returned to with the cigars. And, you know—

AMY GOODMAN: And their cameras successfully filmed their voyage?

DUKE RILEY: Yeah, yeah. Well, that was—it was important that we—as I said, yeah, there was 50 pigeons, and 25 of them I trained to carry the cigars, and 25 to carry these very tiny cameras so that I could film the process and prove that it actually happened.

AMY GOODMAN: Well, Secretary of State Kerry is headed to Cuba right now, and, well, at least relations are going to begin to be normalized with the U.S. Embassy in Cuba, the flag being raised, the one in Havana. We covered just a few weeks ago the one in Washington, D.C. Your thoughts, as an artist who, well, attempted to break the embargo a little while ago?

DUKE RILEY: Yeah, well, I think that when I was doing the project, I was, you know, mainly concerned more with the fact that I feel that the Trading with the Enemy Act is completely unconstitutional and is different than an embargo, actually, because it’s the—

DUKE RILEY: Yeah, well—I’m not very good at this.

AMY GOODMAN: Well, I want to thank you for being with us.

AMY GOODMAN: Duke Riley did the “Trading with the Enemy” project, and we’ll link to it at democracynow.org. 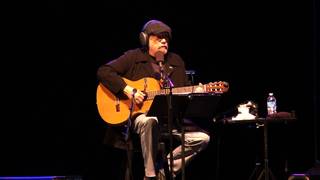