As the United States expands airstrikes in Syria, we speak with French journalist Nicolas Hénin, who was held hostage by ISIS inside Syria for 10 months, spending much of the time locked up in a dungeon. He was held alongside U.S. journalists James Foley and Steven Sotloff, who were later beheaded. Their deaths were videotaped and aired across the world. While he was held hostage, Hénin also briefly met American aid worker Kayla Mueller, who also died in captivity, possibly from a U.S.-led coalition airstrike. Hénin, who was released in April 2014 along with three other French journalists, makes an impassioned plea against bombing Syria. “All these bombings have a terrible effect,” says Hénin. “We are pushing the Syrian people into the hands of ISIS.”

AMY GOODMAN: This is Democracy Now!, democracynow.org, The War and Peace Report. I’m Amy Goodman. While Democracy Now! was in France for the U.N. climate summit, I interviewed French journalist Nicolas Hénin. He was held hostage by the self-proclaimed Islamic State inside Syria for 10 months, spending much of that time locked up in a dungeon. He was held alongside U.S. journalists James Foley and Steven Sotloff, who were later beheaded. Their deaths were videotaped and aired across the world. While he was held hostage, Nicolas Hénin also briefly met American aid worker Kayla Mueller, who also died in captivity, possibly from a U.S.-led coalition airstrike. Nicolas Hénin was released in April 2014 along with three other French journalists. I began by asking Nicolas Hénin if airstrikes are the answer to combating the so-called Islamic State.

NICOLAS HÉNIN: Airstrikes in Syria, the way they are done, are a mistake. I’m not saying that our countries should deprive themselves from any military option. No. The military action should remain in the panel of the strategy. It should be kept as one way to counter terrorism. But the point is that in a counterterrorism strategy, the military shall remain a very little part of the overall strategy, because, eventually, what kind of fight are we fighting? That’s a fight for propaganda. So, basically, the side that will—the party that will win this war is not the party that will fight harder or have the most expensive or newest weaponry or the bravest fighters. It will be the party that will manage to have the people on its side. And the problem is that with all these bombings—because everybody at the moment is bombing Syria—all of these bombings have a terrible side effect. And basically, we—Westerners, but not only Westerners, also the Russians, also the regime—are pushing the Syrian people into the hands of ISIS. We are working for them. We are recruiting for them. So, I’m not saying, no, absolutely, for any strike, but strikes should remain minimal, because we should keep in mind what are the consequences and the side effects of them.

AMY GOODMAN: You have called them, these strikes, a trap.

NICOLAS HÉNIN: Yes, very much. And I called them, especially in the French environment, because just two months ago President Hollande, the French president, advocated for the strikes, and he announced to my fellow countrymen that these strikes were aiming at securing our country, at making it safer, because he said it’s better to fight the terrorists of ISIS there in Syria, so that we don’t have to fight them here at home. And what is the consequence? We have seen, with the Paris attacks, that these strikes probably contributed to designate us, the French people, even further as a target for ISIS. So these strikes were counterproductive.

AMY GOODMAN: So, what is the answer, Nicolas?

NICOLAS HÉNIN: The answer is to engage the people, to address especially their cry for—their desperate call for freedom, democracy and, first of all, on a very short term, security. Over the last four-and-a-half years, Syrian people have been massacred at the pace of 200 people per day. That’s even higher than the death toll of the Paris attack. This is something we have to address first, because these 200 people killed every day are the reason for the—the primary reason for the success of ISIS.

AMY GOODMAN: Talk about what happened to you in June of 2013.

NICOLAS HÉNIN: Bad, bad memory. I mean, I—it’s—I was just taken, and I—

AMY GOODMAN: Where were you?

NICOLAS HÉNIN: I was in Raqqa, so one of the—well, the Syrian capital city of the Islamic State. And I was reporting. That was my fifth trip to Syria since the beginning of the revolution. And they have taken me. I tried to escape on the third day, so of course they were not happy. And I’ve been moved and moved and moved. And also some people have been moved with me, and eventually, we found out, being two dozen Westerners hostages together, journalists or aid workers.

AMY GOODMAN: Why did you open your book with James Foley?

NICOLAS HÉNIN: James was the first to be murdered, and that was a trauma, a personal trauma to me, but also a trauma for the world. And this is why I open my book with him, because the aim of the Islamic State by murdering him was to open a trap wide open and under our feet. They wanted to impose their agenda on us. They wanted to stone us, that we are so much shocked that we stop acting rationally. Because, you know, Amy, there is something very specific with a terror action. The success, the completion of a terrorist attack, does not depend on its perpetrators, but it depends on its victims.

The beautiful example for that is the aftermath of 9/11. I mean, how did the Bush administration react after 9/11? We had the invasion of Afghanistan and Iraq, that later became the birthplace of the Islamic State. We had Guantánamo, extraordinary rendition and the PATRIOT Act. I mean, one must be totally stupid to believe that we punished Osama bin Laden and al-Qaeda, invading Iraq and Afghanistan. And even the opposite: The real success on 9/11, this is not the collapse of the twin towers; the real success of 9/11, this is the invasion of Afghanistan and Iraq. And this was not made by the terrorists. This success is only due to the victim. The Americans were victims of the terrorists, but they offered to their aggressors their success. And this is something that we shall always keep in mind every time we are hit by a major terrorist attack: What want our aggressor us to do? What would you like me to do, and how shall I react to displease him?

AMY GOODMAN: ISIL hostage, French journalist, Nicolas Hénin. We’ll be back with him in a minute. 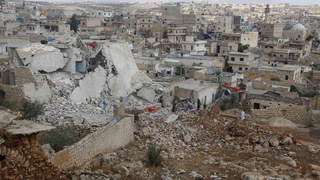