In a major legal victory, New York City will appoint an independent civilian monitor to oversee the New York Police Department’s counterterrorism activities. The announcement comes after two lawsuits challenged the NYPD’s programs of spying on Muslims and religious centers. The suits argued the NYPD violated the U.S. and New York state constitutions by singling out and stigmatizing entire communities based on their religion. The settlement restores some of the NYPD’s outside oversight, which was eliminated after the September 11 attacks. We are joined by Hina Shamsi, director of the American Civil Liberties Union’s National Security Project.

AMY GOODMAN: We turn right now to a record settlement that has taken place in New York. Today we’re are going to talk to Hina Shamsi, director of the American Civil Liberties Union. In a major legal victory, New York will appoint an independent civilian monitor to oversee the New York Police Department’s counterterrorism activities. The announcement comes after two lawsuits challenged the NYPD’s programs of spying on Muslims and religious centers. The suits argued the NYPD violated the U.S. and New York state constitutions by singling out and stigmatizing entire communities based on their religion. The settlement restores some of the NYPD’s outside oversight, which was eliminated after the September 11th attacks.

In 2013, Democracy Now! interviewed Linda Sarsour, director of the Arab American Association of New York, about the NYPD’s efforts to infiltrate her organization.

LINDA SARSOUR: What the NYPD wanted to do to my organization—they clearly laid this out in a secret document—is they wanted to recruit a confidential informant to sit on my board. So not only were they creating listening posts and going into our restaurants, coming to our events, coming—acting as clients in our organizations, they wanted to actually have someone who would have—who would be a deciding figure on my board. They’d have access to donors, access to information, access to financial information. And I think that the—we keep learning that the program is just more outrageous.

And what it does is it creates psychological warfare in our community. How am I supposed to know if the NYPD was successful in that endeavor? That’s number one. Number two is, the community right now is in a position where, how do we even know the guy next to us that’s praying at the mosque or the guy at the restaurant that’s like trying to open a conversation with us about something that’s happening in Egypt, for example—and for those people who know Arabs, particularly, we love to talk about politics. And a lot of us and a lot of our families came to the United States so we could have a place to practice our religion freely, to have our own political views. And now that we know that the NYPD wants to hear what our sentiment is, that’s—people probably don’t want to share their sentiment.

And the most disturbing of all is our Muslim student associations, who are calling us to consult about how political should their events be. Now, when I was in college, I wanted my events to be as political as possible. And if they weren’t, I wanted to make the—I wanted to figure out how to make them controversial. And the fact that our students feel like they can’t do that because there are going to be NYPD informants, because they can be taken out of context, and because they think something like what happened to Fahad Hashmi is going to happen to them, I think is a valid concern for them to have.

Hina, welcome back to Democracy Now! Explain the significance of what you just worked out with the city.

HINA SHAMSI: Thank you for having me, Amy.

We think that this is a landmark settlement. It comes in two related lawsuits, which I’d like to explain just a little bit. But what it does is, for the first time, there are much-needed reforms that have been put in place to prevent discriminatory, unjustified surveillance of American Muslims. And this is a set of terms that is designed to do just that. It comes both in our lawsuit, which was a constitutional challenge based on equal protection and religious freedom grounds to the NYPD’s mapping of American Muslims, to infiltration, through the use of undercovers and informants, of religious houses of worship, student groups and such, as well as the devastating harm that resulted. Our lawsuit was motivated by the concerns of our clients, as well as communities and allies, about fear and stigma that was pervading the community.

There’s also a second, long-standing lawsuit called Handschu, which was filed back in 1971, that challenged, at that time, unconstitutional surveillance of political activists. And in 1985, the court in that case issued a consent decree, and there were a set of rules called the Handschu Guidelines that regulate how the NYPD may investigate or conduct surveillance of religious and political activities. And on Thursday, among the changes that we announced, new reforms strengthen safeguards in those guidelines, and the appointment of a civilian representative with the power and the obligation to ensure that the NYPD is following them.

AMY GOODMAN: So, explain what you feel are the most important changes.

HINA SHAMSI: For the first time, the NYPD is agreeing to a robust anti-discrimination policy. Investigations in which religion, race or ethnicity plays a substantial or motivating factor would be barred. There are now safeguards against some of the things that were most problematic for communities, which were the use of undercovers and informants and open-ended investigations. So now undercovers and informants may only be used if information cannot be obtained through less intrusive means, which is strong language that courts use in order to prevent harm from those kinds of techniques. Presumptively, there are time limits on investigations. Before, there were none. And now, the NYPD is also going to account for—would account for the impact on religious and political activities of these kinds of intrusive methods.

And I will add one more thing, which is that for what are called preliminary investigations, the NYPD needs to have an articulable and factual basis of the possibility of criminal activity—so no hunch or bias. And again, I think one of the key aspects of this is the civilian representative, and for a couple of different reasons. Strong language, strong safeguards are always necessary, but so is external oversight. So, in this context, the civilian representative is appointed by the mayor, not by the NYPD, which allows impacted communities, community members to be able to advocate with the mayor—we tried to build this in—to advocate with the mayor for the strongest possible candidate for this position. The position must continue for five years, and presumably should continue after. And to the extent that the mayor seeks to abolish this position, there must be 90 days’ notice. And again, at that point, impacted communities can advocate to see if they want to continue the position or not.

AMY GOODMAN: I want to turn to Imam Deen Shareef. He was speaking in 2012 after discovering his mosque was under NYPD surveillance.

IMAM DEEN SHAREEF: We are Muslims. We are Americans. And we go about our daily lives trying to establish the best kind of contribution that we can make to the American society. And for us to find out that we are now under suspicion with respect to some criminal activity, without any explanation as to what the provocation was, what the motivation is, what are the people that they’re looking for, it is very disturbing for us to find this out. And then to find out that the New York Police Department actually took photographs of our mothers, our children, and those individuals that come into our businesses has created an atmosphere where there is certainly an undue suspicion that has been cast upon the entire Muslim community.

HINA SHAMSI: And that, I think, reflects so much of what motivated this lawsuit. Our clients, community members that we spoke to describe religious leaders who are afraid of counseling their congregants for fear that those congregants might be informants; imams across the city, including our clients, recording their sermons for fear that what they say might be misconstrued by law enforcement; a disruption in the relationships between communities and the police to whom they should be able to look for protection, as community members described being fearful of engaging with the police on common, day-to-day issues like reporting crime or, worse, reporting domestic violence, for fear that that would result in additional scrutiny.

And I think much of this is also laid out in a report called “Mapping Muslims” by our co-counsel, the CLEAR project at CUNY Law School. But I think part of what was devastating to listen to was community leaders who would describe a generation of youth growing up fearful of their law enforcement, fearful of exercising their constitutionally protected rights to worship, to speak and to associate. And that’s not what our country is, and that’s not what our city is. And so, I think it is a very good thing that the NYPD has committed to reforms and safeguards that can start, if—once approved by the court, as we hope, to repair some of the damage and to help ensure that this does not happen again.

AMY GOODMAN: I wanted to turn to a piece by Aviva Stahl. She recently wrote it about what has happened at Brooklyn College. She said a New York Police Department officer, an NYPD officer, pretended to convert to Islam and assumed the role of a Brooklyn College student at the Islamic Society in New York City as part of a covert operation to spy on Muslims. The officer, who went by the name Mel, short for Melike, spent four years earning the trust of Muslim students at the college as part of an NYPD operation to spy on Muslims. Would that be stopped in this situation?

HINA SHAMSI: We think that there are now more constraints that have been placed on this. That situation came up; some of my co-counsel raised it. It was particularly raised in the context of, you know, was that justified? And I think there were aspects of that that were explained as being linked to ongoing investigations. And then there are obviously concerns about overuse or misuse of undercovers and informants. And so, there are a couple of aspects that I want to bring out with respect to our settlement, which is that all of the provisions need to be read together as a whole. Right? So, you look to see whether—or one hopes a civilian representative or expects a civilian representative would look to see whether the use of undercovers and informants in ongoing investigations, lengthy investigations, would be justified or would be prevented under the new guidelines going forward.

“The National Shame Continues”: On Its 14th Anniversary, Will Guantánamo Ever Be Closed?

NEXT“The National Shame Continues”: On Its 14th Anniversary, Will Guantánamo Ever Be Closed? 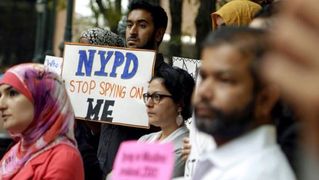 New York Drops Police Unit that Spied on Muslims, But Will It End Broader Profiling & Surveillance?