On Wednesday, 88 of Detroit’s roughly 100 public schools were closed in the latest mass teacher “sickouts” protesting underfunding, black mold, rat infestations, crumbling buildings and inadequate staffing. Detroit Public Schools are under the control of unelected emergency manager Darnell Earley—none other than the unelected emergency manager who presided over the water contamination in Flint. We discuss the sickout and the state of Detroit’s schools with two guests: Victor Gibson, a retired Detroit public school teacher and active union member, and Russ Bellant, an education advocate and the former education director for the stationary engineers union, where he trained engineers working in the Detroit Public Schools.

NERMEEN SHAIKH: On Wednesday, 88 of Detroit’s roughly 100 public schools were closed in the latest mass teacher “sickouts” protesting underfunding, black mold, rat infestations, crumbling buildings and inadequate staffing. Detroit’s public schools are under the control of unelected emergency manager, Darnell Earley. He’s none other than the unelected emergency manager who presided over the water contamination in Flint.

Victor Gibson, let’s go to you. Talk about your school—you retired from it last year as a teacher—that is one of the schools that was closed by the sickout on the day that President Obama was in Detroit hailing the success of the auto industry.

VICTOR GIBSON: Yes. Let me be clear that my school is—the name is Paul Robeson Malcolm X, but it’s the combination of both schools from an earlier combination of closing of schools. My school is the school that—where the three ladies who have been, thus far, very active in getting the main body of teachers to stand up for themselves, after being quietly left into the classrooms for so long. And these—this school is one of the schools that have said enough is enough. And these teachers have finally kind of listened to themselves, listened to their students and their parents, who have stated that these children and our children have been under such great duress and strain from not learning, but not for being educated, but as opposed to being just constantly tested, tested, tested. I know most of your listeners should be aware of these whole phenomena of reform for schools that have gone on since 2005, 2006, and even before that. So, this whole thing of changing the curriculum from one where you are nurturing children to their fullest potential to one where they’re being just put in front of computers and lab-rat-tested on any particular curriculum they happen to come along—

AMY GOODMAN: I mean, I think—I think “rat” is the operative word here, and not just lab rats, but actually rats in the schools.

AMY GOODMAN: Can you talk about the astounding conditions that we just saw described? When, you know, we’re dealing—a lot of the nation’s focus is now on Flint. But black mold, rats, mice in the schools? How has it come to this point?

VICTOR GIBSON: Well, if you look at it as a homeowner, if you buy a home and you don’t invest in your infrastructure of your home, the longer you stay in that building, the building is going to deteriorate. That just goes without saying. And with this deficit spending, where the home for—for the money that’s being channeled away from the structure of the buildings, yes, the roof has leaked. This is our—for Paul Robeson Malcolm X, this is our third—no, this is our fourth school that we’ve been placed in, and each school is getting progressively worse. We’re now a K-through-eight school, but now we’re being housed in a building that was originally built for K through five. So, everything is primarily on a smaller scale. But when you look at the roof, that has been gone neglected.

If you look at the—just the electrical infrastructure, let’s talk about that. We have all of this high-tech equipment they’re trying to interface and infuse into the school system, but you’re in a building that doesn’t carry that kind of electrical load. And so, even if you get the technology in there, there’s a good chance it will not work. So that’s—I mean, as far as the structure of the building, windows—I mean, we look at the windows that were made for schools back in the 1940s, 1950s, I mean, these windows are still in place. I mean, there might have been upgrades here and there, but between the water system and the pipes and the plumbing—I remember this one water system that we had, I had to prevent the children from actually drinking from that water back in 2012, when we moved into the building, because I noticed the grey—the orange-yellowish tint that was coming out the faucet. So I made the administration aware of that, but the only change they—the only thing they did was just try to shut down that particular drinking stations that were in the school. So—

AMY GOODMAN: Let me bring Russ Bellant into this conversation.

VICTOR GIBSON: —if we look at the age of the pipe—yes.

AMY GOODMAN: I just want to bring Russ in, before we wrap up the discussion. Darnell Earley, the emergency manager who was responsible for the water change in Flint, using—instead of the Detroit water system that Flint had used for 50 years—the dirty, corrosive, polluted Flint River, has now been moved to oversee the DPS, the Detroit Public Schools. Can you explain the connection and what’s happening now?

RUSS BELLANT: Well, the common thread there, of course, is the governor of the state of Michigan—in this case, Rick Snyder. But he’s one of three governors since 1999 who have been systematically dismantling the Detroit Public Schools system, looting it and taking it from a big surplus it had under the elected school board and rising enrollment and rising test scores up through 1999—they took it over. And it’s—what we’re looking at, Amy, is a 17-year process of dismantling the Detroit Public Schools system, of eroding its capacity for education, for service in this community.

And, you know, the governor is still not even fully telling the truth, not only on the Flint water situation, but on the Detroit Public Schools. He said in October that the debt will be about $515 million. Well, if you look at the audited financial reports from 2013, it was $686 million. June 2015, they’re reporting $786 million. He’s saying $515 million maybe. So, you know, this is a governor who hasn’t got the commitment to education, and he follows in a line of several others that have systematically exploited DPS and created lies and—you know, frankly, to mislead the public, so people would buy into the support and the end of democracy in Detroit and for dictatorship from Lansing.

NERMEEN SHAIKH: Russ Bellant, you’re right to point this out, and now the situation is such that Detroit Public Schools could run out of money as early as April. Could you talk about what that would mean?

RUSS BELLANT: Well, when they say run out of money, they’re saying that teachers wouldn’t get paid, the staff wouldn’t get paid. And they paint a bleak—a vague picture of a system being shut down. But they—I think what the other thing that this talks to, Amy, is that the state of Michigan has never done an analysis of what it costs to educate a child. They were mandated by the Legislature to come up with a cost estimate to use for funding education in Detroit and across the state. They failed to do so. And so, what they’re really suggesting—and this is—there’s other school districts suffering in Michigan, as well, on the funding side. They’re really saying that they’re not adequately funding education. And—

AMY GOODMAN: Can you talk about where that money is going? Because there are millions of dollars going into the schools.

RUSS BELLANT: Yeah. A huge amount of the money is going to contractors and to investors for—where the district—and this goes back some years under the period when our elected board was actually dismantled by law. It was—ceased to exist. And they did huge financial deals that we paid 50 percent financial costs for, for hundreds of millions of dollars. We’re still paying that, as well as a whole set of new loans, short- and long-term loans, and bond programs that were unnecessary. And all this was to enrich contractors. And many of us in the community believe that the real reason for the takeover of the Detroit Public Schools system by these successive governors was about a looting operation and using it as a cash cow for friends and contractors and investors. The district right now is being run by a consulting company out of New York City.

RUSS BELLANT: And they’re not putting any top talent in there. They’re putting college graduates in there, and they’re making decisions that the educators should be making in the city, and the parents and the community.

AMY GOODMAN: What’s it called, the contractor in New York?

AMY GOODMAN: Well, we’re going to have to leave it there, but we’ll continue to cover this story. Russ Bellant, education advocate, and Victor Gibson, retired Detroit public school teacher. This is Democracy Now!, democracynow.org, The War and Peace Report. I’m Amy Goodman, with Nermeen Shaikh.

NEXTThe 1% Economy: The World’s Richest 62 People Now Have as Much as Poorest 3.6 Billion 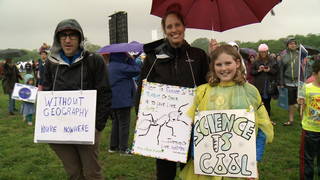