A new report from Oxfam on global inequality finds the world’s richest 62 billionaires now own as much wealth as half the world. The wealth of the poorest half—3.6 billion people—has fallen by $1 trillion since 2010. At the same time, the wealth of the world’s richest 62 people has increased by more than half a trillion dollars. Oxfam faults a global financial system that has “supercharged the age-old ability of the rich and powerful to use their position to further concentrate their wealth.” The report singles out deregulation, privatization and offshore tax havens that have let trillions of dollars go untaxed. The Oxfam report is timed to coincide with the meeting of global elites at the World Economic Forum in Davos, Switzerland. We are joined by Raymond Offenheiser, president of Oxfam America.

NERMEEN SHAIKH: Five years ago, the combined wealth of the globe’s top 388 billionaires was equal to half the world’s population. If that contrast is shocking, consider how many billionaires it takes for that same divide today: 62. According to a new report from Oxfam on global inequality, it’s now just 62 of the world’s richest billionaires who own as much wealth as half the world’s population. The wealth of the poorest half—that’s 3.6 billion people—has fallen by $1 trillion since 2010. At the same time, the wealth of the world’s richest 62 people has increased by more than half a trillion dollars. Oxfam faults a global financial system that has, quote, “supercharged the age-old ability of the rich and powerful to use their position to further concentrate their wealth.”

AMY GOODMAN: The report singles out deregulation, privatization, offshore tax havens that have let trillions of dollars go untaxed. Oxfam says denying governments of this massive source of revenue has hampered efforts to provide basic social services and tackle inequality. A review of some 200 major companies shows 90 percent operate in at least one tax haven. The Oxfam report is timed to coincide with the meeting of the global elites at the World Economic Forum in Davos, Switzerland.

For more, we turn to Raymond Offenheiser, president of Oxfam America.

RAYMOND OFFENHEISER: That’s correct. And as you noted, that this has been an accelerating pattern. I think what our report is trying to do is really point out the fact that I think we have a global inequality crisis, and we’re trying to legitimize that narrative and through the use of these kinds of numbers. I think what’s been stunning to us is not only the fact that we have, you know, that level of concentration, but the process is accelerating. And I think what we’re trying to understand is, if we allow this process to accelerate, not only here in the United States, but literally in countries around the world and in regions where you’d not expect it—in the Chinas and the Indias and even in Africa—it raises a lot of questions about some of the things you talked about in your earlier broadcast about Michigan, which is: How do we fund public services for the poor? How do we finance development into the future? How do we alleviate poverty, if in fact we’re seeing, you know, underfinancing of infrastructure and schools and health systems and so forth? So, we’re really trying to underline the fact that there is an inequality crisis, and we’ve got to really address directly this accelerating concentration of wealth and the mechanisms and systems, really, that enable it.

NERMEEN SHAIKH: And, Ray Offenheiser, can you explain specifically what the role of tax havens are in this quite staggering inequality that the report points to?

RAYMOND OFFENHEISER: Well, tax havens basically is a mechanism that’s been created by the financial industry and corporations to allow them to basically produce value in one location and then transfer that value—that may have a high tax base or tax rate, and then transfer it, in some fashion or another, to another location with a much lower tax rate, and then pay the tax rate in those locations where it’s much more favorable. And there’s all sorts of accounting mechanisms that allow this to happen, and also legislation that provides loopholes that enable companies to move value overseas. So, for example, here in the United States, companies actually can deduct the cost of moving jobs overseas, in one case. They can actually move the value of brands and trademarks overseas. They can actually—they’re exempt from, for example, taxing the value of subsidiaries overseas. So there’s a variety of ways these tax havens—that tax rules enable the tax havens to work. The banking industry has been a major beneficiary of all this, because this money is then put in bank accounts in these tax havens, so you’ve seen an explosion of banking—you know, offshoring of the banking industry to the Cayman Islands and the British Virgin—

RAYMOND OFFENHEISER: Well, this is an act that’s been put forward in Congress by Carl Levin and Senator Whitehouse from Rhode Island—Carl Levin from Michigan, Whitehouse from Rhode Island, and Lloyd Doggett from Texas. And it’s an act—it now has 41 sponsors in the House, three in the Senate—that basically tries to close exactly the loopholes I just mentioned and a variety of other ones. Quite frankly, what it really does is it closes those loopholes, and it tries to force, through SEC regulation, greater levels of transparency, and try to get rid of this disconnect between where you generate value and where you report it. And what we really want to force the companies to do is to say—if you produce value in the United States, you know, and you produce value overseas, that should be fully transparent to citizens, so we actually can get a fair deal on taxation of corporations, because it’s that diminished corporate taxation that’s creating the situations we see in Flint and a variety of other locations around the United States and around the world.

NERMEEN SHAIKH: Well, a large number of the billionaires listed in Forbes have inherited their wealth. Could you talk about the importance of estate tax?

RAYMOND OFFENHEISER: Well, I think we believe that the whole issue of wealth of individuals is as important in corporate tax. We’ve been focusing on corporate tax, in some sense, because we see it as really a global issue. I think 47 of the 62 [billionaires] are actually Americans, so we have a really particular problem here at home. But what Oxfam is really focused on is: What does this mean for developing countries, where we’re trying to address poverty issues? What does it mean in Africa? And what does it mean in some of these emerging economies where we see actually wealth and high rates of growth? What we’re trying to focus on is, if we allow the system to continue in the way it’s continuing, those countries will lose critical value they need now to fund their own development. And the endgame we seek is actually one in which countries are taking responsibility for their own development by building strong institutions and building a tax system that will fund their citizens’ welfare.

RAYMOND OFFENHEISER: Well, it varies country to country. I think here in the United—

RAYMOND OFFENHEISER: Right here in the United States, I think we estimate that if we close the loopholes through the Stop Haven Abuse Act, we’d probably have—we’d probably have 220 billion additional dollars that we could invest in the economy over about a five- to 10-year period.

AMY GOODMAN: We’re going to continue this conversation and post it online at democracynow.org. Raymond Offenheiser is president of the international relief and development organization Oxfam America. We’ll link to the report it’s just put out, “An Economy for the 1%: How Privilege and Power in the Economy Drive Extreme Inequality and How This Can Be Stopped.”

That does it for the broadcast. We have two job openings: a director of finance and operations and a director of development. Go to democracynow.org for more information. 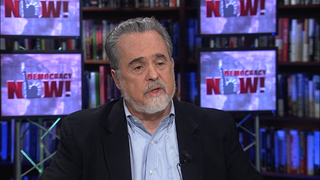