In the new film “Life, Animated,” Pulitzer Prize-winning journalist Ron Suskind recounts his experience with his son Owen Suskind, who was diagnosed with regressive autism when he was three years old and has since gone to college and now holds two jobs. Elaborating on his best-selling book, “Life, Animated: A Story of Sidekicks, Heroes, and Autism,” Suskind says he and other parents have worked to discover what their children are passionate about, and “when you match the strengths with the deficits, often they help themselves.” He also discusses challenges for parents with few resources to find schools and assisted living environments for their autistic children, and his advocacy efforts to ensure health insurance companies cover the cost of therapies that could benefit autistic children.

StoryJan 27, 2016Life, Animated: A Remarkable Story of How a Family Reached Their Autistic Son Through Disney Movies

AMY GOODMAN: This is Democracy Now!, democracynow.org, The War and Peace Report. I’m Amy Goodman. We’re broadcasting from the Sundance Film Festival in Park City, Utah, from Park City Television. We return now to our interview with Ron and Owen Suskind and filmmaker Roger Ross Williams about their film Life, Animated.

AMY GOODMAN: It is so clear that enormous resources, in addition to your devotion and love, have gone into working with Owen and making sure that, Owen, your life is fully protected—

AMY GOODMAN: —and that you’re a—you’re the amazing person that you are today.

AMY GOODMAN: So, how did you do it? And what do you say to those without the resources to do this?

RON SUSKIND: Well, you know, it’s something we talk to thousands of families these days, since certainly the book came out, and even it will be even more now with the movie. And, you know, we are advocates to make sure that the therapies needed for autism are covered by insurance, as I think 38 states do—many still don’t, and not fully covered. You know, it’s difficult for so many families. I mean, the one thing we do say, if it’s possible to trim your jib enough that one parent can stay home, that ended up being important for us, and it’s important for many.

The other thing that we found, though, with all of the money we spent, the thing that had the greatest heal, the greatest outcome, is finding Owen’s passion, his affinity, and saying, whatever it is, we’re going to go deep into that. It could be Disney, it could be cars, it could be astronomy, it could be maps. We’re going to live inside of his world. And in there, we’re going to essentially find a way to build a vessel that he can drive out into the world. That’s something that’s mostly what they would call sweat equity—just time, often in the evenings, of us all being together and saying whatever his passion is will be our passion. I mean, we were no great Disney fans to start with, but we became them because Owen created a whole language using Disney.

AMY GOODMAN: But in that life of assisted living, of the school, you clearly found one of the finest schools. What do you say to other parents who don’t have the resources to be able to provide that kind of support?

RON SUSKIND: You know, right now, we are leading advocacy to get legislation changed to have the government say, you know, it helps everyone if guys like Owen get the support they need to be productive members of society. And what we find, it’s often by tapping their intense interest in the thing that animates them. That’s why the book’s called Life, Animated. Once you find that, you find skills that are often overlooked, that end up being pathways to jobs, careers and being productive. Especially when—Owen is 24 now. When they hit 22 years old, they get out of school. They’ve got to find their way somehow. The thing we found that’s most hopeful is that so many of the people who are autistic are in this left-behind group because of our own blind spot as to the things they can do. If we just look at the world through their eyes, you see those capabilities. And that leads to the independent life, which is Owen—Owen’s great struggle—

RON SUSKIND: —and desire is to find the independent life.

RON SUSKIND: Have you found it?

RON SUSKIND: For a long time, these interests were called restrictive interests, obsessions, and therapists would say, “Just cut it off. Either tame it or cut it off.”

AMY GOODMAN: Meaning like if he’s into these Disney cartoons—

RON SUSKIND: Yeah, cut it off.

AMY GOODMAN: —let him watch it for 15 minutes, and that’s it.

RON SUSKIND: That’s right, and then stop. It’s not productive, it’s an obsession. And that’s the way autism viewed them for a very, very long time. We said, after a while, “No, no, it’s not an obsession. It’s a pathway. Go in there with him.” And that’s what we did. And that’s called a reversal of the telescope, that folks at NIH say that, because now, all of a sudden, we’re looking at these special interests as ways to show deep capabilities. If you find them and nourish them—we called them affinities—the kid grows.

AMY GOODMAN: Give me another example.

RON SUSKIND: Well, they’re all over the place. You know, somebody contacted us recently, because parents are calling from all over. Here’s a kid, no speech, about five years old. They live in New York City. The kid is drawing logos, because they drive around, there are logos all over New York, logos just like Owen draws characters. The house is full of logos, precisely drawn. At one point, the child hands the mother the Sleepy’s mattress logo. And she looks down and goes, “Nap.” He’s like, “Yeah, yeah.” It’s speech. Next thing you know, the family is singing jingles. And that’s how the kid gets speech back at seven or eight years old. And, of course, what’s interesting is that now that’s a special kid with profound talents—I mean, he’ll reinvent advertising someday—instead of being a kid in the discard pile.

Now, look, autism is a heavy lift, and it’s important to remember that lots of kids have deep deficits that we’re working so hard to help them with. But what we’re finding is that when you match the strengths with the deficits, often they help themselves. They form the bond that leads them forward. You know, look, any kid like this, it’s a question of a square peg and a round hole. And for years, we’re saying, “Let’s shave off those edges.” Well, the fact is, those edges are the best part. And so that’s the big change. Help them be larger versions of themselves, because they actually are quite self-directed. They know their strengths.

And when they do that, you get a kid like Owen whose self-esteem is fabulous, because he’s like, this idea—he said at his Bar Mitzvah, he’s like, “I’m special. But 'special' is a real word. It’s not a word meaning less. I’m not less. I’m just different. And I’m a proud autistic man who’s different. Embrace that, that I’m different, and celebrate it.” And that’s what he said at that speech in France. And that’s a great story for all of us, families with kids who are people who deal with autism, who are autistic, that helps the world look at them, I think, with what Proust would call new eyes. And that’s part of what’s happening here because of all that’s occurring. 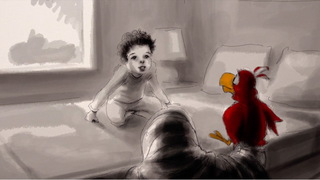 Life, Animated: A Remarkable Story of How a Family Reached Their Autistic Son Through Disney Movies