Rocky Anderson, former mayor of Salt Lake City, Utah, has filed a lawsuit over government surveillance of phone, text and email communications that the Bush administration allegedly conducted during the 2002 Winter Olympics. He argues they put a “surveillance cone” over a broad geographic area and violated surveillance laws enacted in the 1970s after the Church Committee hearings exposed similar civil rights abuses.

AMY GOODMAN: We only have two minutes left, Rocky Anderson. I wanted to ask you about a lawsuit that you launched six months ago.

ROCKY ANDERSON: Yes, and they talked about surveillance last night, and like let’s just forget about our civil liberties and our freedoms when it comes to fighting ISIS. You know, our country has been in a lot worse danger than this. But I filed an action—it was about six months ago—against the FBI, the NSA, George Bush, Cheney, Addington, others. And it’s—it was based on what we found out from a story that broke in The Wall Street Journal, and I’ve confirmed this and more from an insider that was at the NSA, that for the first time in our nation’s history, the NSA basically put a cone, a surveillance cone, over geographic areas, including Salt Lake City, including Park City—

AMY GOODMAN: Where we are right now.

ROCKY ANDERSON: —where we are right now, and grabbing the contents of every single incoming and outgoing email, text message and the metadata of every single telephone call.

ROCKY ANDERSON: That was in 2002 during the Winter Olympics here at Salt Lake.

AMY GOODMAN: And has the administration admitted this? Has anyone?

ROCKY ANDERSON: No. When you call their spokesperson, they say, “Well, we won’t admit or deny it.” And it’s interesting. After I filed the complaint, they still haven’t denied it. They just say, “Oh, you don’t have standing,” or, “You can’t pursue this. You can’t seek an injunction against the continued storage of these communications.” And we know, given the NSA philosophy, they hoard everything they can get.

ROCKY ANDERSON: Yeah, he was on the Senate Intelligence Committee.

ROCKY ANDERSON: Yeah. And he basically admitted that this happened, because he justified it. He said, “Well, this was just a few months afterwards.” Very strange that people like former Senator Bob Bennett and Senator Hatch would justify people in the executive branch committing federal felonies under laws passed by the United States Congress.

AMY GOODMAN: How is it a federal felony?

ROCKY ANDERSON: It’s a federal felony under the Foreign Intelligence Surveillance Act, that was passed following the revelations of the Church Committee in the late 1970s about these very kinds of security abuses of our civil rights. You remember the Church Committee. And so, they passed laws to say this isn’t ever going to happen again. And we had a president, in George Bush, who said, “Those laws don’t apply to me.”

AMY GOODMAN: Well, we’ll certainly continue to follow that. I want to thank you so much, Rocky Anderson, former mayor of Salt Lake City, right here in Utah, former Democrat who once endorsed Mitt Romney for governor of Massachusetts. In 2012, Rocky Anderson ran for president on the Justice Party ticket, now an attorney practicing in Salt Lake City, founder of High Road for Human Rights.

This is Democracy Now! When we come back, you don’t want to miss this: Audrie & Daisy. Stay with us. 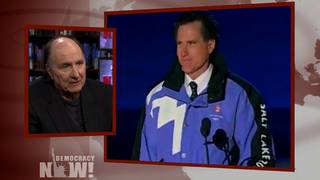