We discuss the crackdown on the resistance to the Dakota Access pipeline with Winona LaDuke, a Native American activist and executive director of the group Honor the Earth who lives and works on the White Earth Reservation in northern Minnesota, and Tara Houska, national campaigns director for Honor the Earth. Police have begun deploying military-grade equipment, including armored personnel carriers, surveillance helicopters, planes and drones. North Dakota Governor Jack Dalrymple activated the National Guard in late September. Roughly 140 people have been arrested. Some report being strip-searched in custody at the Morton County jail and being held for days without bond, even when they are facing minor misdemeanor charges.

AMY GOODMAN: This is Democracy Now!, democracynow.org, The War and Peace Report. We’re broadcasting live from outside the courthouse and jail in Mandan, North Dakota. Water and land protectors, as they call themselves, report facing increasing repression amidst the ongoing resistance to the $3.8 billion Dakota Access pipeline. Police have begun deploying military-grade equipment, including armored personnel carriers, surveillance helicopters, planes and drones. North Dakota Governor Jack Dalrymple activated the National Guard in late September. Roughly 140 people have been arrested. Some report being strip-searched in custody at the Morton County jail, even when they’re facing minor misdemeanor charges. This is Dr. Sara Jumping Eagle, a pediatrician on the Standing Rock Sioux Reservation, a member of the Standing Rock Sioux Tribe.

DR. SARA JUMPING EAGLE: When I was taken to the jail, first I was taken by a corrections officer, transported from the protest site to the Morton County jail. And then, when they took me in there, you know, they had to take some basic information. And then, one of the things that they do is have you go into a small room, and there was a female officer there, and we had to—I had to take my clothes off, and then, I don’t know, basically—

AMY GOODMAN: So you were put in an orange jumpsuit?

AMY GOODMAN: How did it make you feel?

DR. SARA JUMPING EAGLE: It made me feel—you know, it made me think about my ancestors and what had they gone through. And this was in no way a comparison to what we’ve survived before, so just made me feel more determined about what I’m doing and why I’m here.

AMY GOODMAN: That’s Dr. Sara Jumping Eagle, a pediatrician, member of the Standing Rock Sioux Tribe. She was charged with disorderly conduct. LaDonna Brave Bull Allard, who founded the first resistance camp, the Sacred Stone Camp, on her own land April 1st, says her daughter was recently arrested, taken into custody at the Morton County jail, strip-searched in front of multiple male officers, then left for hours in her cell, naked and freezing, before the guards finally gave her clothes to wear. LaDonna Allard says her daughter was repeatedly asked by guards, “Who is your mother?” which Allard sees as an indication that her daughter was targeted because of who she is. Cody Hall from Cheyenne River Reservation in South Dakota says he was also strip-searched after he was arrested Friday, September 9th, held for three days without bail or bond, and then charged with two misdemeanors.

CODY HALL: As I exited out of the vehicles and entered Morton County, I came up an elevator, and as the elevator opened up, I was met with state police. And then, you know, of course, Morton County people were there to book people, but—and then, from there, started the process of the booking, and then, again, you know, went into a private room, where they ask you to, you know, get naked. You know, they had my arms. They, you know, kind of like extend your arms out. And you’re fully naked. And they have you, you know, lift up your genitals and bend over, you know, cough. And so, it’s really one of those tactics that they try to break down your mentalness of everyday life, because not every day do you wake up and say, “Hey, I’m going to get, you know, naked and have somebody search me today,” you know? That’s a private—you know, that’s a private feeling for you, when you get naked, so…

AMY GOODMAN: And four days later, when you were finally released—they hadn’t allowed you to go out on bail or bond for those four days—you came before a judge in the orange jumpsuit?

CODY HALL: Yes, yes, I sat in the court office in my orange jumpsuit, locked, you know, still handcuffed, exited out of the courtroom. And as I left the courtroom, there were 20 or so state police all in their bullet-proof vests, everything just looking, you know, like—you know, like they’re going into action of some sort. And then they literally had a line from the courtroom to the door that connects you to the county jail. And my mother walked out with me. And as we got to the door, they were opening the door up. And as I looked behind me, my mother and I, all of the cops then proceeded to kind of swarm, you know, like make, you know, that big wall as I entered in, which was, again, an overkill, you know, but that, too, though, to show a dominant force.

AMY GOODMAN: That was Cody Hall, who was arrested on two misdemeanors, held for four days, strip-searched here at the Morton County jail just behind us.

Well, for more on the resistance to the Dakota Access pipeline and the police crackdown, we’re joined by two guests. Winona LaDuke, Native American activist, executive director of the group Honor the Earth, she lives and works on the White Earth Reservation in northern Minnesota. And we’re joined by Tara Houska, national campaigns director for Honor the Earth. She is Ojibwe from the Couchiching First Nation.

We welcome you both to Democracy Now! Winona, let’s start with you. We have spoken to you intermittently through this resistance. Where does it stand now?

WINONA LADUKE: Well, as far as we are in—I mean, I’m just looking at the big picture. Right now there is about 900,000 barrels per day of oil coming out of this state, and they project that into 2019. And so, what I’m trying to understand is, is that if that’s all they have and it’s already going out, why do they need another pipeline of 570,000 barrels of oil per day? In other words, they’re already meeting all their demand. For the next two years, that’s all the oil that’s in there. And this is really—what we call this is the Dakota Excess pipeline.

WINONA LADUKE: It’s just really about hating. You know, it’s just really about trying to put something in across these tribes. It’s exactly what the chairman and you said before: If they wanted this pipeline so damn bad, they should have put it north of Bismarck, you know, and they should have—they should not have violated the law. The whole pipeline was approved through something called the Nationwide Permit number 12, which means they could it into a lot of little pieces and never do an EIS, and pretend like—you know, that’s intended for like if you have like a pipeline from a school to the water service center or something like that. It’s not intended for a 1,600-mile pipeline. Total misuse of the law, you know, and the president really needs to intervene and uphold the law.

AMY GOODMAN: Tara Houska, you have been following these protests and the level of militarization in response to the protests. You were there on Saturday. We spoke to you at one of these peaceful marches of hundreds of Native Americans.

TARA HOUSKA: Yeah, I mean, we’ve seen this incredibly militarized response from North Dakota that has been so over the top in reaction to Native Americans peacefully protesting, praying for the land, praying for the water. These are women and children that are out there. I mean, we saw the most—the most recent one on Indigenous Peoples’ Day. They had Native Americans out there praying for the land. They put a tipi up in front of the actual pipeline route, and they called that a riot. There’s nobody there rioting. They’re doing that as they’re—North Dakota is doing that as it’s increasing the amount of militarized response, militarized force. They’re calling in other sheriffs from other states. They’re upping this incredible amount of police force for no reason.

AMY GOODMAN: You fought them in northern Minnesota.

WINONA LADUKE: We fought them in northern Minnesota. And in August, they announced that they had canceled the Sandpiper, which was the 640,000-barrel-per-day oil pipeline, tar—you know, pipeline from—the fracked oil pipeline they wanted to put across our territory. We defeated that pipeline, and they came out here and moved out here.

But, you know, I think that the whole context that you’re talking about is really important. This is pretty much the Deep North. That’s what it is. Nobody’s been paying attention to what’s happening in North Dakota. They’ve been flying over it and say, “Hope it works out for y’all.” And in the meantime, Indian arrests have been consistent. There’s no infrastructure. Native people are treated like, you know, third-class citizens. You know, suicide rates—everything is going on. And, you know, the governor is acting like this is Mississippi up here, and you can just do that. And now people are finally noticing. But it’s been going on for a long time up here. And this is, you know, finally a flashpoint where people are saying, “That’s enough. We’re not going to let you take our water. We’re not going to let you destroy that which is ours.”

AMY GOODMAN: You know, after Ferguson, the whole country saw the level of militarization of local police departments. You were there, Tara, where there was an MRAP, there’s a armored personnel carrier at this peaceful protest, where you offered the police water, clean water, right?

AMY GOODMAN: What inspires you most, Tara?

AMY GOODMAN: Not so little, Winona. I mean, we’ve never seen a unification like this in decades, thousands of people from hundreds of tribes across three—Canada, the United States and Latin America?

WINONA LADUKE: Well, and it’s not just Native people. There’s a lot of other people. I mean, the woman who was charged, Rebecca Kemble, is an alderwoman, you know, in Wisconsin. She wasn’t just a, you know, regular person. But Dane County sent out their cops, because they are also looking at a pipeline, Line 66, which is the biggest tar sands pipeline.

AMY GOODMAN: We’re going to have to leave it there, but we’re going to do Part 2 and post it online at democracynow.org. Winona LaDuke and Tara Houska of Honor the Earth. 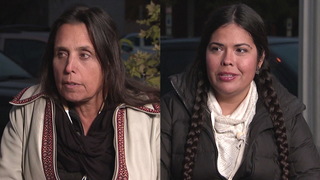