Donald Trump and Hillary Clinton squared off at the third and final debate at the University of Nevada, Las Vegas, Wednesday night. In one of the most extreme statements of the night, Donald Trump said he might not accept the results of the November election, instead saying, “I will keep you in suspense.” He also repeated his call to build a massive wall along the Mexican border. “We have some bad hombres here, and we’re going to get them out,” Trump said.

NERMEEN SHAIKH: Republican Donald Trump and Democrat Hillary Clinton faced off Wednesday night in Las Vegas in the final debate before the November 8th election. Trump continued to claim the election has been rigged, and said he would not commit to accepting the outcome of the vote if he loses. Trump’s comments sparked an outcry even from within his own party. Republican Senator Jeff Flake of Arizona tweeted, quote, Donald Trump “saying that he might not accept election results is beyond the pale.” Republican strategist Steve Schmidt described the comment as a, quote, “disqualifying moment” for Trump.

The debate was filled with personal attacks between the two candidates. Clinton accused Trump of being a puppet of Russian President Vladimir Putin, while Trump called Clinton a, quote, “nasty woman.” Trump also rejected the claims of nine women who have come forward to say they were sexually assaulted by him. Trump accused Clinton of being behind the claims.

AMY GOODMAN: Well, today we’ll air highlights from the debate and get response from Black Lives Matter co-founder Alicia Garza, Pulitzer Prize-winning historian Eric Foner, Phyllis Bennis of the Institute for Policy Studies, and more. We begin the hour looking at the issue of immigration. This is Donald Trump speaking at the debate in Las Vegas.

DONALD TRUMP: Now, I want to build the wall. We need the wall. The Border Patrol, ICE, they all want the wall. We stop the drugs. We shore up the border. One of my first acts will be to get all of the drug lords, all of the bad ones—we have some bad, bad people in this country that have to go out. We’re going to get them out. We’re going to secure the border. And once the border is secured, at a later date, we’ll make a determination as to the rest. But we have some bad hombres here, and we’re going to get ’em out.

CHRIS WALLACE: Mr. Trump, thank you. Same question to you, Secretary Clinton. Basically, why are you right and Mr. Trump is wrong?

HILLARY CLINTON: Well, as he was talking, I was thinking about a young girl I met here in Las Vegas, Carla, who is very worried that her parents might be deported, because she was born in this country, but they were not. They work hard. They do everything they can to give her a good life.

We have 11 million undocumented people. They have 4 million American citizen children. Fifteen million people. He said as recently as a few weeks ago in Phoenix that every undocumented person would be subject to deportation. Now, here’s what that means. It means you would have to have a massive law enforcement presence, where law enforcement officers would be going school to school, home to home, business to business, rounding up people who are undocumented. And we would then have to put them on trains, on buses, to get them out of our country. …

CHRIS WALLACE: Thank you, Secretary Clinton. I want to follow up—

DONALD TRUMP: I think I should respond to that. First of all, I had a very good meeting with the president of Mexico, very nice man. We will be doing very much better with Mexico on trade deals. Believe me. The NAFTA deal signed by her husband is one of the worst deals ever made of any kind, signed by anybody. It’s a disaster.

DONALD TRUMP: We are a country of laws.

DONALD TRUMP: We either have—and, by the way—

CHRIS WALLACE: No, wait. I’d like to hear from—

DONALD TRUMP: Well—well, but she said one thing.

HILLARY CLINTON: I voted for border security. And there are some—

DONALD TRUMP: And the wall.

HILLARY CLINTON: There are some limited places where that was appropriate. There also is necessarily going to be new technology and how best to deploy that. But it is clear, when you look at what Donald has been proposing—he started his campaign bashing immigrants, calling Mexican immigrants rapists and criminals and drug dealers—that he has a very different view about what we should do to deal with immigrants.

NERMEEN SHAIKH: During the debate, Donald Trump and Hillary Clinton also sparred over who is best prepared to be president.

DONALD TRUMP: For 30 years, you’ve been in position to help, and if you say that I use steel or I use something else, I—make it impossible for me to do that. I wouldn’t mind. The problem is, you talk, but you don’t get anything done, Hillary. You don’t. Just like when you ran the State Department, $6 billion was missing. How do you miss $6 billion? You ran the State Department. Six billion dollars was either stolen—they don’t know. It’s gone, $6 billion. If you become president, this country is going to be in some mess. Believe me.

HILLARY CLINTON: Well, first of all, what he just said about the State Department is not only untrue, it’s been debunked numerous times.

But I think it’s really an important issue. He raised the 30 years of experience, so let me just talk briefly about that. You know, back in the 1970s, I worked for the Children’s Defense Fund, and I was taking on discrimination against African-American kids in schools. He was getting sued by the Justice Department for racial discrimination in his apartment buildings. In the 1980s, I was working to reform the schools in Arkansas. He was borrowing $14 million from his father to start his businesses. In the 1990s, I went to Beijing, and I said women’s rights are human rights. He insulted a former Miss Universe, Alicia Machado, called her an “eating machine.”

DONALD TRUMP: Give me a break.

HILLARY CLINTON: And on the day when I was in the Situation Room monitoring the raid that brought Osama bin Laden to justice, he was hosting the Celebrity Apprentice. So, I’m happy to compare my 30 years of experience, what I’ve done for this country, trying to help in every way I could, especially kids and families get ahead and stay ahead, with your 30 years, and I’ll let the American people make that decision.

DONALD TRUMP: Well, I think I did a much better job. I built a massive company, a great company, some of the greatest assets anywhere in the world, worth many, many billions of dollars. I started with a $1 million loan. I agree with that. It’s a $1 million loan. But I built a phenomenal company.

CHRIS WALLACE: So, in effect, the final question I want to ask you in this regard is—and let me start with you, Mr. Trump: Would President Trump make a deal to save Medicare and Social Security that included both tax increases and benefit cuts—in effect, a grand bargain on entitlements?

CHRIS WALLACE: That’s not going to help on entitlements.

DONALD TRUMP: No, it’s going to totally help you. And one thing we have to do: repeal and replace the disaster known as Obamacare. It’s destroying our country. It’s destroying our businesses, our small business and our big businesses. We have to repeal and replace Obamacare. You take a look at the kind of numbers that that will cost us in the year '17, it is a disaster. If we don't repeal and replace—now, it’s probably going to die of its own weight. But Obamacare has to go. It’s—the premiums are going up 60, 70, 80 percent. Next year they’re going to go up over 100 percent. And I’m really glad that the premiums have started—at least the people see what’s happening, because she wants to keep Obamacare, and she wants to make it even worse. And it can’t get any worse—bad healthcare at the most expensive price. We have to repeal and replace Obamacare.

CHRIS WALLACE: And, Secretary Clinton, same question, because at this point Social Security and Medicare are going to run out, the trust funds are going to run out of money. Will you, as president, entertain—will you consider a grand bargain, a deal that includes both tax increases and benefit cuts, to try to save both programs?

DONALD TRUMP: Such a nasty woman.

HILLARY CLINTON: —by making sure that we have sufficient resources. And that will come from either raising the cap and/or finding other ways to get more money into it. I will not cut benefits. I want to enhance benefits for low-income workers and for women who have been disadvantaged by the current Social Security system.

AMY GOODMAN: And that was Donald Trump interrupting a few seconds before Hillary Clinton finished, saying, “Such a nasty woman,” Hillary Clinton and Donald Trump facing off Wednesday night in Las Vegas in the final presidential debate before the November 8th elections. When we come back, they spar over the Clinton Foundation. Stay with us. 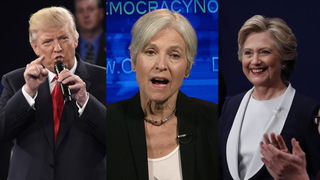