Award-winning filmmaker Josh Fox joins us to discuss the arrest of fellow filmmaker Deia Schlosberg, who is charged with three felonies for filming an act of civil disobedience in which climate activists manually turned off the safety valves to stop the flow of tar sands oil through pipelines spanning the U.S. and Canada. “These people are not accessories to the crime, they are the media,” Fox says. “This is a constitutionally protected activity.” Schlosberg was the producer of Fox’s recent documentary, “How to Let Go of the World and Love All the Things Climate Can’t Change.”

AMY GOODMAN: I wanted to bring in your colleague, Josh Fox, who is the award-winning filmmaker, along with you, of How to Let Go of the World and Love All the Things Climate Can’t Change, also made Gasland and Gasland 2. Josh, you wrote a piece for The Nation. Talk about the charges against your colleague, the piece you wrote, “The Arrest of Journalists and Filmmakers Covering the Dakota Pipeline is a Threat to Democracy—and the Planet.”

JOSH FOX: Well, first of all, I have to say, Deia and I have been all over the world. She’s an exceptional reporter. We were, you know, working in the Amazon together investigating an oil spill that was 12 kilometers into the jungle. I’ve seen her trek past, you know, some of the most dangerous things in the world in making this film. Never did I ever think that the biggest threat to her life, of her livelihood, would be the United States government and our police force.

What worries me the most is that we have two really disturbing patterns at work here. One is pipelines. We have pipelines being put in all across the United States of America. Of course, we stand with Standing Rock against the Dakota Access pipeline, Deia working with—or working to report on activists that were doing an action against tar sands pipelines. We have pipelines crisscrossing this entire United States of America, because we are in a new regime of fossil fuel development because of fracked oil and fracked gas—the Constitution pipeline, the NED pipeline, the Sabal Trail pipeline, the Millennium pipeline, the AIM pipeline, the Algonquin pipeline expansion. I could go on and on and on. There is a plan to build 300 new fracked gas power plants in America, and that’s going to require thousands upon thousands of miles of pipelines. These pipeline battles are going to escalate, because no one wants those pipelines through their property.

The second part of this is obviously a brutal repression of the media, which you, Amy Goodman, Shailene, right here next to me, and Deia have experienced firsthand. There have been other journalists arrested in North Dakota covering these pipeline actions. I would add, in addition, the two other reporters that were arrested alongside of Deia, one in Washington state, and our cameraman, that I work with frequently, Steve Liptay, was just given charges in the mail in Minnesota. These people are not accessories to the crime, they are the media. This is a First Amendment, constitutionally protected activity. And it is—you know, I mean, it’s part—what I worry about is that in the most brutally repressive regimes throughout history, one of the first things that those tyrannical despots do is throw the press in jail, is to make sure that there is a lockdown on things that they don’t want reported. And I think, Amy, it speaks volumes to the work that you’ve been doing for decades, that it’s clear that the mainstream media will not report on Standing Rock, and they will not report on these pipeline battles. It is infuriating, and it is an abdication of duty to watch the Kardashians and other nonsense, which is called news, when we have revolts happening all across the United States of America, not just in Standing Rock, not just in North Dakota, but in New York state and in Florida and West Virginia and Seattle. And, you know, there is a very active movement against fossil fuels, because people don’t want fossil fuels anymore, and therefore they have to suppress the reporting on it. It makes me terrified for the future of our profession. We need to be able to operate as documentarians. We need to be able to operate as independent media that are allowed to bring these stories to the public. And it’s constitutionally protected. And we won’t rest. You know, we would never have been able to make How to Let Go of the World and Love All the Things Climate Can’t Change, if this type of media repression was happening in other countries where we were reporting—in Africa, in China, in Peru, in Ecuador. This—I mean, you know, this cuts so deep to the heart of what we need to do to not only inspire people with stories about climate activists, but also just to make them aware of all the dangers of this fossil fuel expansion.

AMY GOODMAN: We have to bring in our second break. We’ll be back. Josh Fox, Deia Schlosberg, Shailene Woodley, I want to thank you for being with us. This is Democracy Now! We’ll be back in 30 seconds. 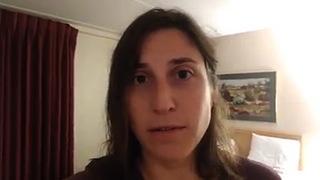