In Colombia, voters have rejected a peace agreement between the government and the nation’s largest rebel group in a shocking turn of events that threatens to prolong the nation’s 52-year-old civil war. By a razor-thin vote of 50.2 to 49.8 percent, Colombians rejected the peace deal hammered out with the FARC guerrilla movement and signed just days ago by President Juan Manuel Santos. It was a stunning upset for a referendum that was expected to pass overwhelmingly. We speak to Mario Murillo, a longtime Colombian activist and author of “Colombia and the United States: War, Unrest, and Destabilization.”

AMY GOODMAN: In Colombia, voters have rejected a peace agreement between the government and the nation’s largest rebel group in a shocking turn of events that threatens to prolong the nation’s 52-year-old civil war. By a razor-thin vote of 50.2 to 49.8 percent, Colombians rejected the peace deal hammered out with the FARC guerrilla movement and signed just days ago by Colombian President Juan Manuel Santos. It was a stunning upset for a referendum that was expected to pass overwhelmingly. In Havana, where peace talks have taken place over the past four years, FARC leader Rodrigo Londoño promised his movement would continue to work towards peace.

RODRIGO LONDOÑO: [translated] The FARC maintains its willingness for peace and reiterates its position to use only words as weapons to work toward the future. To the Colombian people who dream of peace, you can count on us. Peace will win out.

AMY GOODMAN: President Santos sent his negotiating team back to Havana for talks today and said a ceasefire with the FARC would remain in effect. Turnout in the referendum was low, less than 40 percent nationwide, just 25 percent in some areas along the Caribbean coast hit with heavy rain from Hurricane Matthew. In Bogotá, many supporters of the peace deal wept as results came in.

DANIELA BENAVIDES: [translated] I am Daniela Benavides. I am a law student, and I voted “yes” because I thought that Colombia was going to say “yes” to peace. No one thought that this was really going to happen. We were hopeful that we were going to live in a new country. We had hoped for so many things, but people just simply decided to continue with the war and continue with pain of more than 50 years, and not think about us, the young people, nor all of the future generations. I know that this agreement wasn’t perfect and that it had millions of points that obviously are not very good, but I prefer an agreement where some of the words are wrong, instead of war, where the bullets keep firing at people’s heads.

AMY GOODMAN: Many of those voting “no” objected to the peace deal’s offer of amnesty, limited immunity from prosecution, and reduced sentences granted to FARC rebels. Álvaro Uribe, the right-wing former president, led the “no” campaign, arguing rebels should not be allowed to re-enter society without facing punishment.

ÁLVARO URIBE: [translated] This gives impunity and eligibility to run for office to the highest leaders of the FARC, the largest cocaine-trafficking cartel in the world.

AMY GOODMAN: Colombia’s civil war began in 1964, has claimed some 220,000 lives. More than 5 million people are estimated to have been displaced.

Joining us here in New York is Mario Murillo, a longtime Colombian activist, professor of communications at Hofstra University. He’s author of Colombia and the United States: War, Unrest, and Destabilization.

Can you talk about the significance of this “no” vote?

MARIO MURILLO: Well, I think we put too much weight on the plebiscite, referendum, to begin with. But it is significant. I mean, obviously, the one—the Uribe camp and the supporters of the “no” vote, the ones who ended up winning by a slim margin, are calling it a victory and a demonstration of Colombian democracy. And in many ways, it is. It’s emblematic of Colombian democracy, when you talk about high levels of abstention, which you pointed at in your introduction; when you talk about a major disparity between those rural areas, most affected by the war, that voted overwhelmingly in favor of ending it, of saying “yes” to this peace deal—despite its problems, they voted “yes”—and the urban areas, where, for the most part, they’ve been distant from the war and haven’t lived it en carne propia, you know, all the time, as directly as in the countryside, voted more in favor of “no.”

And then, finally, the fear, right? Why is Trump, you know, leading or now facing possible election in this country? Why did—how did the Brexit situation happen in the U.K.? In Colombia, the intimidation and fear was so palpable—was so strong, palpable in the media and in the coverage, in what Uribe and his camp put out there, that it was almost inevitable that it was going to be this result. And I think part of the problem was that they put too much weight on the vote as opposed to pointing out, OK, what needs to be done to really put an end to this war.

AMY GOODMAN: And so, what happens next? You have Santos, the president—this is a huge failure for him—saying he’s sending the team back to Havana to negotiate, that he has to reach out more to Uribe and to the “no” forces, but he says the ceasefire will remain in effect, as the FARC say. So what does this mean?

MARIO MURILLO: Well, I think that’s what everybody is hoping. I think—I mean, yesterday, there was devastation, you know, in Jackson Heights, Queens, in New York City. For listeners outside of New York, that’s like the heart of the Colombian community in New York. And it was—you could see the divisions there. You can see 60 people outside the polling place, 60, 70 people totally in favor of “yes,” and 60 to 70 people on the other side of the street, separated by barricades and by police, totally in favor of “no” and screaming, you know, pretty hostile things at those in the “yes” vote. And that’s the division that exists in Colombia.

But the people in the “yes” side are insisting that this is not necessarily a victory for war, that we have to just have to work harder to try to address the many problems that face Colombia right now. There’s concerns—and this is something that’s not being reported, is that the backlash has already begun against supporters of the “yes” vote and against the FARC. I mean, there was reports yesterday and during the week leading up to the referendum on Sunday that the right and the remaining members, the armed bands that still remain as former paramilitary groups that would be mobilized under Uribe, where you didn’t see the public outcry that we’re seeing now with the FARC, that were saying that the minute these FARC rebels turn in their weapons, they’re going to be considered criminal—they’re going to be considered military targets. And that’s not even being reported, the issue of what’s going to happen subsequent to this accord.

So I think we were putting too much weight on the accord and not on what’s going to happen, whether or not it won in the vote, what was going to happen subsequent to that. And I think that’s the thing we should be paying attention to: what is happening in the countryside, the levels of intimidation against both former FARC rebels, if this process does continue to move forward, and the people who are in those areas that are supporting a cessation of hostilities.

AMY GOODMAN: Uribe made this a referendum on impunity for FARC, but what about the paramilitaries and the government, those forces that were so responsible for so many deaths?

MARIO MURILLO: I think the issue of impunity is a tough one, because we keep focusing on impunity for the FARC. And this has to be pointed out, that the peace deal was also talking about dealing with the soldiers and the military, members of the public forces, the armed forces of Colombia, that were involved in massive atrocities during this 50-year civil war. And nobody talks about them as getting off scot-free, as well, which is one of the issues.

And the other issue is exactly what you’re pointing out, that when Uribe negotiated a deal with the paramilitary groups, the right-wing groups that were working hand in hand with the armed forces in Colombia, carrying out a dirty war in the countryside for decades, massacring people, forcing displaced—forcibly displacing millions of people—when that process was unfolding, there was no opposition to—there was a lot of opposition, but you didn’t hear Uribe and the right wing talking about impunity at that point. These people, Salvatore Mancuso, the head of the AUC, walked into Congress, and he got a standing ovation, right? And here they are, concerned about giving 10 seats to the FARC as part of this peace deal in the Congress. That would only last, by the way, for eight years. It would be a political process to allow them to insert themselves into the political life.

So, it’s disingenuous at best, and it’s just typical of the intransigence of the Colombian right. The right in Colombia doesn’t cede anything without a brutal fight against those who are struggling for social justice. And unfortunately, that is now going to be pushed back even further because of this referendum.

AMY GOODMAN: Do you see the ceasefire holding? Will there be another referendum held? I mean, less than half of the population voted, less than 40 percent.

MARIO MURILLO: It’s really—it’s still unclear. I think the FARC, at least at the high command level, are totally convinced that they have to cease hostilities. The level of tranquility in some parts of the countryside is recognizable, and it’s—and I think all sides are recognizing that we can’t go back into war. My fear, again—and I think a lot of people are pointing this out—is that there’s going to be acts of violence committed by both the right and by some remnants of the FARC and other guerrilla groups that are still operating in the country that are going to be projected in the media as hostilities renewing at a level of what we saw two, three, five years ago. And the minute that happens, then the media, once again, we’re going to see an onslaught saying, “See, these guys aren’t serious. They’re not serious about negotiations,” that they’re once again going at war, even—because there are members of the FARC, who are, you know, a small minority of the FARC, that are still concerned about handing in their weapons and being part of this demobilization process. If they get into a firefight, then carry out attacks with—especially from sectors of the right, it could get pretty ugly pretty quickly.

AMY GOODMAN: Mario Murillo, I want to thank you for being with us, longtime Colombian activist and professor of communications at Hofstra University, author of Colombia and the United States: War, Unrest, and Destabilization. 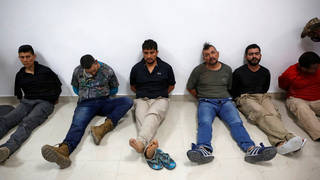