We host a discussion on how Bernie Sanders and the Democratic Party plan to deal with a Trump presidency. We speak with RoseAnn DeMoro, executive director of National Nurses United; Larry Cohen, who served as a senior adviser to Bernie Sanders and is now the board chair of Our Revolution; and Kevin de León, president pro-tem of the California State Senate, who joins us in Marrakech, Morocco.

StoryNov 04, 2016Michael Moore: How I Moved from Supporting Bernie Sanders to Hillary Clinton for President

AMY GOODMAN: I wanted to bring in RoseAnn DeMoro. You tweeted this summary from Bernie Sanders’ speech last night: “The American people believe in progressive policies. We need to reform the Dem party.” What kind of reforms do you believe that he is calling for? He’s talking about making demands, like removing Steve Bannon as his chief adviser—Steve Bannon, for you, as a nurse, who has said, “Birth control makes women unattractive and crazy,” talked about “Bill Kristol: Republican spoiler, renegade Jew,” all these comments of Steve Bannon—but also talked about how to work—those are headlines from Breitbart News, which he headed—but also how to work with President Trump. Your thoughts, RoseAnn DeMoro?

ROSEANN DEMORO: Hi, Amy. And thank you so much for having us on. And I really want—just before I answer your question, I want to thank you for your work on DAPL and your courage. I mean, you have just won the hearts and minds of this nation.

The nation is in an entirely different place than people like to pretend. I mean, this isn’t—where this nation is, so I’m answering this kind of in a context, people are suffering. And that’s what—you know, I run the nurses’ organization. And what I hear from the nurses, first of all, they are so appalled by the racism, because they don’t make choices between people. A nurse will care for someone who’s impoverished, irrespective of what race they are. They treat everyone equally. And they expect a more humane response from the president of the United States, period.

But having said that, I will also say that racism didn’t begin with Donald Trump speaking. The Democrats have had ample opportunity to do many things in this country to elevate the status of all working people. And so, what you see here and you see in the millions of people who are supporting the Bernie Sanders movement—it is not Bernie Sanders; there is a movement, and Bernie Sanders is the leader of that movement. What that movement is about is a different America. And it’s not just a different America from the Donald Trump America; it’s a different America from the Democrats’—the traditional Democrats’ view of America. This nation is in a revolutionary mode, and Bernie Sanders is one wing, and Donald Trump is the other. And, ultimately, it was a very clarifying election, because what’s happened with the Democrats—and I’ll set aside the California Legislature, I have to, because it’s my bias: They actually try to do the right thing, usually. But in America, the Democrats have had every chance to do so much for this country. We should have single payer in this country, which would help every person in this country. We should have had trade policies that actually created jobs across this country. And instead—I mean, and there’s a whole myriad of things—you know, public education, all the things that Bernie’s been talking about as he’s been on the campaign.

We’ve been on the campaign—Larry and I have been on the campaign with Bernie for—the journey with Bernie, as we call it—for a year and a half. And what we see is a very different America than what Donald Trump sees, I believe. There—the people who voted for Donald Trump, in great part, would have voted for Bernie Sanders. Bernie Sanders would have won the general election, I have no doubt. You look at Michigan, you look at Wisconsin. I was in Iowa, I was in Nevada. I could see the love. There’s love. You go to a—it’s not—it’s almost the antithesis, right? So we have a values clarification moment in history. There is the Bernie Sanders movement, which is: We love this country; we want a country that’s humane for all people. And then you have the Trump, that basically works on divisiveness and separating people. If—the most symbolic thing that Donald Trump could do, from my perspective, is to actually work with Bernie Sanders. That would send the best message throughout this country, to listen to Bernie Sanders.

Now, on Donald Trump, you know, we had—we had Arnold Schwarzenegger as the governor of California. And he came in as a bully. He came in, you know, completely full of himself. And the people of California, nurses in the lead on that one, took him down. I mean, they took him down. And his credibility went from the highest to the lowest. It was—so, the power of the people, which is in the Sanders campaign, is what we have to count on as a game changer in this country. And I am 100 percent, and the nurses are one—I just met with the executive board of the National Nurses yesterday, and they are 1,000 percent on the campaign with Bernie to transform this country. So, shame on the Democrats for letting—for letting us down, frankly. And the reaction is here. You know, the Republicans—we’re very fearful of Paul Ryan. You touch Medicare, you’re going to see a revolution in this country.

AMY GOODMAN: That’s a very interesting point, that Paul Ryan is saying going after Medicare almost immediately. Kevin de León, let me ask you something. You have RoseAnn DeMoro and Larry Cohen, who were very strong supporters of Bernie Sanders all along. You supported Hillary Clinton. In fact, the WikiLeaks emails even suggested she was considering you for vice-presidential running mate. Do you think the Democrats chose the wrong candidate in this year?

AMY GOODMAN: And your thoughts on him becoming the most powerful—well, I was going to say Democrat, but really non-Democrat? He caucuses with the Democratic Party. But, clearly now, we’re talking about a revolution from the base at this point.

SEN. KEVIN DE LEÓN: Well, I can say this, is I wish him, as well as other leaders, the very best to be a voice, a strong voice, in Washington, D.C. But I also believe that the best policies are—the national laboratory for policies are coming out of the states and the state of California. So, as opposed to progressive pontification, what we’ve done in California is we actually have raised the minimum wage to $15 an hour. We have actually given women equal pay for equal work. We have actually provided healthcare for undocumented children and dealt with the issue of climate change. That’s why we’re here in Marrakech, Morocco.

AMY GOODMAN: And very quickly, the—

SEN. KEVIN DE LEÓN: So we’re not in the theoretical; we’re actually in the execution, implementation.

AMY GOODMAN: And what it would mean if Trump pulls out of the Paris climate agreement for California, the fifth-largest economy in the world?

SEN. KEVIN DE LEÓN: Well, I’ve made it very—I’ve made it very clear here, since I’ve been in Marrakech, Morocco, that irrespective of the ascendancy of Donald J. Trump, California, with other subnationals, other like-minded states, RGGI states in the Northeast of the United States, the Pacific Northwest, as well as Canada, Mexico and China, we’re going to go it alone. We’re going to move forward. We have grown the economy to be the fifth-largest economy in the world. It’s done so with a sense of intentionality and purpose, not by luck and happenstance, how we move our public policies dealing with the issue of climate change.

AMY GOODMAN: And, Larry Cohen, I want to give you the last words. We have 10 seconds.

LARRY COHEN: Yeah, Our Revolution will fight on. We do see this as a moment of not just resistance, but fighting forward in the states, in local communities. And we’re ready for it.

LARRY COHEN: We have a rally today to celebrate the TPP victory. We can move forward.

AMY GOODMAN: And that rally in Washington, D.C. I want to thank you all for being with us, Larry Cohen, former head of CWA, Communications Workers of America, RoseAnn DeMoro of National Nurses United, and Kevin de León, the California Senate president.

That does it for our broadcast. We’ll be celebrating Democracy Now!’s 20th anniversary on December 5th. Come one, come all, to New York. Harry Belafonte, Noam Chomsky, Patti Smith, Danny DeVito, Danny Glover and more others will be there. Check our website, democracynow.org. 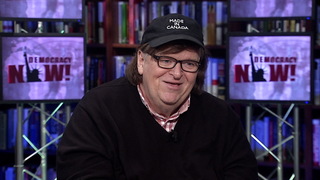