In a Democracy Now! special, Vermont Senator Bernie Sanders sat down with Amy Goodman at the Free Library of Philadelphia on Monday night in his most extensive broadcast interview since Donald Trump defeated Hillary Clinton two weeks ago. He began by speaking about Donald Trump’s election night victory and the need to rebuild the Democratic Party.

AMY GOODMAN: Today, in a Democracy Now! special, we spend the hour with Vermont Senator Bernie Sanders in his most extensive broadcast interview since Donald Trump defeated Hillary Clinton two weeks ago. In the wake of the election, Sanders has emerged as one of the most powerful voices in Washington. During the Democratic primary, the independent, the self-identified socialist shocked the nation by winning 22 states and about 45 percent of pledged delegates, while challenging Hillary Clinton, who began her campaign with the support of the entire Democratic Party establishment. Many Sanders supporters now wonder if he would have been the stronger candidate to face Donald Trump in the general election.

While Sanders lost the primary, he has not given up the fight. He has now launched a campaign to rebuild the Democratic Party from inside out. Earlier this month, he was elected to a leadership position in the Senate as the new chair of the outreach for Senate Democrats. In addition, Sanders is leading the push for Congressman Keith Ellison to become the next head of the Democratic National Committee. Ellison is the first Muslim elected to Congress, and he’s the co-chair of the Congressional Progressive Caucus. Meanwhile, some of Sanders’ top campaign staffers have launched a new political action organization called Our Revolution to fight for progressive change. Our Revolution is also the name of Bernie Sanders’ new best-selling book.

Well, on Monday, I interviewed Bernie Sanders in front of a live audience at the Free Library of Philadelphia.

AMY GOODMAN: Where were you on election night?

AMY GOODMAN: And talk about what you went through.

SEN. BERNIE SANDERS: Well, when the results came in from Indiana, I was very nervous. We had an outside chance with a conservative Democrat to win that seat—no one thought that Clinton was going to win it—and he got beaten rather badly, and I started getting nervous. And it was downhill from there. I went into the evening thinking that it was about a two-to-one shot that Clinton would win. So, I mean, I was—I was not shocked that Trump won—surprised, but not shocked—for the reasons, some of the reasons, that I gave. But I will not deny to you that it was a very depressing evening. I did not want to deal with the media. I didn’t want to—I was invited to be on, you know, a million different things. I didn’t even show up at the state event, you know. So, I will not deny that it was a depressing evening. And since then, I’ve been thinking as hard as I can, with other people, about how we go forward and what the best response is.

AMY GOODMAN: This also catapults you into the position of the most powerful, non-Democratic Democrat in the country.

SEN. BERNIE SANDERS: Well, there are not too many non-Democratic Democrats who are in the United States Senate, so it doesn’t say much. But yeah, it—but I think your point is that last week or two weeks ago Chuck Schumer, who is now the leader of the Democrats in the Senate, put me on leadership. And he gave me a position that I wanted, and that is to be chair of the outreach effort. And what I am going to do is use that position, with your help, with all of your help, to transform the Democratic Party. I think—you know, it is very easy to beat up on people when they’re down, and that’s not my intention. You know, Secretary Clinton and her supporters are hurting now. It’s not my intention to be beating up on them. But it goes well beyond the presidential race.

Right now in the United States, as you know, Mr. Trump will be inaugurated. Right now, the Republicans control the U.S. Senate. Democrats, I had hoped—we thought we had a better than even chance of gaining control. We did not. We’ll end up with 49 seats. Democrats picked up a few seats in the House, but the Republicans will continue to control the House. Not only that, in about two-thirds of the states in this country, there are Republican governors. And in the last eight or so years, Democrats have lost some 900 legislative seats in state capitols all over this country. So I think any independent assessment, without casting any blame, says the current approach has failed. All right? When you lose, you know, it’s like they always say about the football coach: You know, if you’re zero and 10, you’re not doing well. Well, the current approach clearly is not succeeding, and we need a new approach.

And the new approach, I think, is to, A, create a 50-state strategy. That means we start playing ball in states that the Democrats have conceded decades ago. But more importantly, we create a kind of grassroots party, where the most important people in the party are not just wealthy campaign contributors, but working people, young people, people in the middle class, who are going to come in and going to start telling us what their needs are and give us some ideas as to how we go forward. And I accept this responsibility as outreach chair with a lot of trepidation, but also with excitement. I’m going to be going around the country to try to do everything that I can to create a party which represents working people and not just the 1 percent.

AMY GOODMAN: And the issue of who will head the Democrat—the DNC?

SEN. BERNIE SANDERS: I am strongly supporting a congressman from Minnesota named Keith Ellison. And the reason—I’ve known Keith for a number of years. Keith is the chair—co-chair, along with Raúl Grijalva, of the House Progressive Caucus, which is, by definition, the most progressive caucus in the U.S. House. And Keith fundamentally believes, as I’ve indicated, that we need to make a major transformation of the Democratic Party, we need to make it into a grassroots party, and he has some very specific ideas as to how to do that. So I’m strongly supporting Keith, and I’ll do everything I can to [inaudible].

AMY GOODMAN: And the significance of his being the first Muslim congressmember at a time when the president-elect says he wants to set up a Muslim registry?

SEN. BERNIE SANDERS: Obviously, there is great symbolism in that. But to me, to be honest with you, as somebody who is not a great fan of identity politics, I am supporting Keith because he is a strong progressive whose whole life has been about standing up for working families and the middle class and low-income families. But your point cannot be denied. And that is, it will be a statement to the entire country that the leader of the Democratic Party is a Muslim, that we want a party of diversity, that we will not accept for one second the bigotry that Trump has been espousing during his campaign.

AMY GOODMAN: What do you think Donald Trump represents?

AMY GOODMAN: And who do you think he represents?

SEN. BERNIE SANDERS: That’s a good question, and I don’t know that I can give you a definitive answer, but this is what I think. For a start, in terms of the campaign, what he did is, as I indicated in my remarks, he touched a nerve. And it would be wrong to deny that. There are some people who think that everybody who voted for Donald Trump is a racist, a sexist or a homophobe or a xenophobe. I don’t believe that. Are those people in his camp? Absolutely. But it would be a tragic mistake to believe that everybody who voted for Donald Trump is a “deplorable.” They’re not. These are people who are disgusted, and they are angry at the establishment. And the Democratic Party has not been clear enough, in my view, about telling those people, whether they are white, whether they are black, Latino, Asian American or whatever, women, gay, whatever, that we are on their side. And too often what we look at is identity. You’re a woman. Well, that’s good, but we need more women in the political process. We need more African Americans in the political process, more Latinos. No question about that. But we need people who will have the guts to stand up to the billionaire class and corporate America and fight for working families.

AMY GOODMAN: Former presidential candidate Senator Bernie Sanders of Vermont. More of him in a minute.

Bernie Sanders: “I Was Stunned” by Corporate Media Blackout During Democratic Primary

NEXTBernie Sanders: “I Was Stunned” by Corporate Media Blackout During Democratic Primary 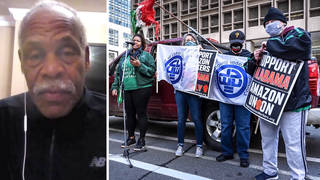 Danny Glover on Amazon Union Drive, the Power of Organized Labor & Centuries of Resistance in Haiti