Bernie Sanders: “I Was Stunned” by Corporate Media Blackout During Democratic Primary

When Vermont Senator Bernie Sanders first launched his campaign, the mainstream media called him a fringe candidate and largely ignored his campaign. But during the Democratic primary, the independent, self-identified socialist shocked the nation by winning 22 states and about 45 percent of pledged delegates while challenging Hillary Clinton, who began her campaign with the support of the entire Democratic Party establishment. Many Sanders supporters now wonder if he would have been the stronger candidate to face Donald Trump in the general election. On Monday night, Bernie Sanders sat down with Amy Goodman for an interview in front of a live audience at the Free Library of Philadelphia and spoke about the corporate media, the Democratic primary and when he began to “feel the Bern.”

AMY GOODMAN: We return to my conversation with the former presidential candidate Senator Bernie Sanders of Vermont. We spoke last night at the Free Library of Philadelphia.

SEN. BERNIE SANDERS: Well, I’ll tell you. This is what I thought, you know, and it’s been a crazy two years. But, you know, what I thought is, look, I wasn’t born yesterday, and I wasn’t—you know, I didn’t just get involved in politics two years ago. I’ve been representing the state of Vermont for 25 years in Congress. I was mayor of the city of Burlington for eight years, where I took on Democrats and Republicans to win election. And I knew, you know, that the message that we had—I could see it in Vermont. You go to the rural areas, by the way, where people are not necessarily pro-choice, where they may not be enthusiastic about gay marriage, where they may or may not believe that climate change is real, but they are sick and tired of having to work two or three jobs, not being able to send their kids to college, worried about their own parents. I picked that up, OK, in Vermont. And I thought that the message that resonated in Vermont—and I won my last election in Vermont four years ago with 71 percent of the vote. I did not believe for one minute that Vermont was any different than the rest of the country.

But what ended up—to answer your question, what happened is, before I decided to run—and the book goes into it—we went around the country. And we did, honestly—you know, politicians always say, “Well, the people asked me to run,” you know, after they had already made a decision to run. But the truth is, I didn’t know. How responsive would people be to our message? Well, I’ll never forget. We were in—on a beautiful Sunday afternoon in Los Angeles—maybe the weather is always beautiful there, I don’t know. But anyhow, it was—and I thought nobody would show up at a meeting. We had the musicians’ union hall. We had 500 people coming out: “Run, Bernie, run.” We were in Minneapolis—this is a funny story, which we relate in the book. You know, we didn’t know our way around Minneapolis. So we were driving around. Suddenly we see this long line of people, and I comment to the guy next to me. I said, “I wonder what concert is going on.” Well, it turns out, 7,000 people were there for an event. This is early on.

And what we were beginning to see with the turnouts, the turnouts at our rallies, more and more people coming out, more and more excitement, more working people, more young people, who indicated to me, in a million different ways, they were sick and tired of establishment politics and establishment economics. They wanted real change. And I will tell you, as the campaign progressed, that it was an awe-inspiring moment, a humbling moment, to be walking out on a stage—I think it was in Portland, Oregon, where the Trail Blazers play in the NBA—and you look out, and there are 28,000 people at a rally in Portland, 25,000 in Seattle, 27,000 in Los Angeles. So people were starting to come out. The word was getting around. And it was especially gratifying to see so much beauty in the faces of young people who want real change in this country.

AMY GOODMAN: And yet, who heard you were the people in that room, in each place. You were having the largest rallies of anyone, including Donald Trump, certainly far surpassing Hillary Clinton. But what Donald Trump had that you didn’t was the media. And, you know, that was repeated over and over by those that owned the media. You know, “He is good for us.” So, it wasn’t just Fox. It was all of the networks that were Trump TV.

AMY GOODMAN: He didn’t have to travel. He was piped into everyone’s homes.

AMY GOODMAN: March 15th, Super Tuesday III, was the night when Rubio gave his speech, and Ted Cruz gave his speech, Clinton gave her speech, and Donald Trump, they waited for half an hour for him to give his speech and showed the open podium, as they often did. They showed more of the open podium waiting for Donald Trump than ever playing your speeches. That’s what—those were all the candidates that night. And they played all their full speeches. They did not play one word of your speech. You were speaking in Phoenix, Arizona, to the largest rally of any of those people that night. They didn’t even speculate where you were.

SEN. BERNIE SANDERS: I wish I could disagree with you. No, no, no, Amy is raising a very—and we go into it in the book. I was stunned. I mean, you know, in the middle of the campaign, you’re not figuring out this stuff or thinking about it. Turns out that from January 1st, 2015, I think, through November 2015, ABC Evening News had us on for 20 seconds.

AMY GOODMAN: What was it you did that was so newsworthy?

SEN. BERNIE SANDERS: And it wasn’t much better on NBC or CBS, all right. And that’s just the simple truth. And there are a couple of points. I think—Amy, correct me if I’m wrong, but I think the guy who’s head of CNN said, “Hey, Trump has been fantastic for us.” I mean, literally said that. “We’re making huge profits from Trump.” And the point to be made is, we had the misfortune of actually trying to talk about the problems facing America and providing real solutions. Trump was tweeting out about how ugly or horrible or disgusting or terrible his opponents were, in really ugly terms. Perfect for the media. That is a great 12-second sound bite. But to talk about why the middle class is in decline or why we have massive levels of income and wealth inequality can’t be done in 12 seconds. And second of all, it’s not something that they are, frankly, terribly interested in.

AMY GOODMAN: It was Les Moonves, who is head of CBS, who said, “It may not be good for America, but it’s good for us.”

SEN. BERNIE SANDERS: Yeah, I think a guy at CNN said something similar, because if you say outrageous things, this is what CNN lives for. That’s what they live for. And then they got to have somebody else: “Did you hear what he said? Oh, my god, it’s terrible.” And they go on and on. And that’s—that is coverage. Here is something. During the primary campaign, somebody—I think it was the Shorenstein school of media at Harvard, just over there. They studied the kind of coverage, and they said that something like 90 percent of media coverage during the primary—and I don’t think they got any better during the general—was all on this kind of stuff, gossip; 10 percent on issues, which surprised me. I didn’t even think it was 10 percent on issues, but… 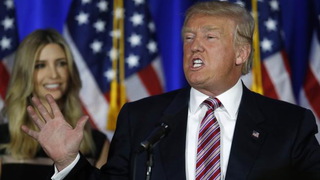