Longtime civil rights activist Dolores Huerta and media critic Norman Solomon continue their debate on the morning after Hillary Clinton claimed victory in the Democratic race. They discuss Donald Trump’s racist remarks, Clinton’s plan to reach out to Sanders supporters, and the decision by the Associated Press and NBC to call the race for Clinton on the eve of the California primary.

AMY GOODMAN: During her victory speech on Tuesday night, Hillary Clinton looked ahead to the general election, attacking Donald Trump.

HILLARY CLINTON: The stakes in this election are high, and the choice is clear. Donald Trump is temperamentally unfit to be president and commander-in-chief. And he’s—he’s not just trying to build a wall between America and Mexico, he’s trying to wall off Americans from each other. When he says, “Let’s make America great again,” that is code for “Let’s take America backwards.”

AMY GOODMAN: That was Hillary Clinton last night. And Donald Trump gave his victory speech at his country club in Briarcliff Manor, New York. It was the first time during this campaign that he was using a teleprompter. His campaign said that he wrote the script along with his inner circle, discussing people like his daughter, Ivanka Trump.

Dolores Huerta, the issue of the wall has been in the forefront in the last few days, because Donald Trump has raised it. He’s trying to get the judge to recuse himself, who is overseeing the civil lawsuit against his now-defunct Trump University, where students are accusing him of defrauding them out of millions of dollars. He says that the judge, Gonzalo Curiel, a federal judge, cannot be—is biased simply because of his Mexican heritage, or, as he says, “He’s a Mexican.” And he directly links it to Trump’s support for the wall. Your response, Dolores Huerta?

DOLORES HUERTA: Well, that’s a ridiculous statement. And again, he is showing his overt racism that he has against Latinos, especially Mexicans. And to attack a judge that way is unethical and might even be illegal, the way that he is doing that. This is, I think, the way that Trump works. He just blows a lot of smoke up there and blows a lot of fire, and he thinks that that is going to somehow be able to cover his actions so that people will not see what the man is and what the man does and what a corrupt person Donald Trump is.

DOLORES HUERTA: And I know that the truth will all be coming out during this campaign.

DOLORES HUERTA: And I do want to say also that—

AMY GOODMAN: I just wanted to talk about the Daily News front page, the New York Daily News. It says, “I’m with racist!” “Trump’s 'Mexican' judge rant is the 'definition of racist,'” says House Speaker Paul Ryan, “but I still support him.”

DOLORES HUERTA: Well, that’s what’s so sad. And I do believe that the racism in the United States of America has been so inherent and so part of the fabric of the United States of America. Hopefully, with Donald Trump bringing it up into the forefront and his supporters bringing it up into the forefront, it will be a call to action for all of our organizations, our agencies, our institutions and government, public and private, that we have to start doing something to end racism—

AMY GOODMAN: Let me turn to—

DOLORES HUERTA: And I do want to say that I think disparaging Hillary Clinton—because she knows Henry Kissinger does not mean that she advocates the policies that Henry Kissinger advocated. I think that’s going a little far afield. And, you know, attacking Hillary Clinton for policies that other people have advocated or that have practiced, I believe, is wrong. And I hope that that does not continue between now and the time that she is running her election for the presidency of the United States.

NORMAN SOLOMON: Yes, well, they’ve praised each other. They’ve praised each other’s policies. Henry Kissinger and Hillary Clinton have publicly lauded each other’s policies. And I agree with the journalist at Consortium News, formerly at Newsweek and Associated Press, Robert Parry, who has documented in great detail that Hillary Clinton’s policies, her advocacies for foreign intervention, are essentially very similar to what we call neocon policies that prevailed under the presidency of George W. Bush. It’s now just called liberal interventionism; it’s now called Responsibility to Protect, or R2P. But the bottom line is the same. So, I just think we need to have a single standard of evaluating the advocacy and policies of presidential candidates. It is really fair to say that Hillary Clinton has advanced, through her words, through her deeds as secretary of state, policies of continual U.S. military intervention and de facto perpetual war. So I think we ought to debate that. Do we support that or not? Do we go silent about it or not?

AMY GOODMAN: I want to turn to a part of Donald Trump’s speech last night.

DONALD TRUMP: We’re going to rebuild our inner cities, which are absolutely a shame and so sad. We’re going to take care of our African-American people, that have been mistreated for so long.

DOLORES HUERTA: Well, that sounds kind of a plantation talk, very patronizing. And I don’t think that African Americans are going to be—are going to be fooled by that kind of speech that Donald Trump is now engaging. I think people are too smart for that. And I’m sure that he’s going to be changing a lot of his rhetoric, maybe not so much against Mexicans, maybe against other people, because we will be seeing a change in Donald Trump by his handlers to try to make him more palatable so that people will vote for him. So, that will be interesting to see that.

AMY GOODMAN: I wanted to go—

DOLORES HUERTA: And he has shown us during this election cycle who he really is. And I don’t think people will be fooled.

AMY GOODMAN: I wanted to turn to a—

DOLORES HUERTA: There’s just too much of a record.

AMY GOODMAN: I wanted to turn to a part of Donald Trump’s speech where he addressed Bernie Sanders’ supporters.

DONALD TRUMP: To all of those Bernie Sanders voters who have been left out in the cold by a rigged system of superdelegates, we welcome you with open arms.

NORMAN SOLOMON: Well, you know, in his statement last night, Donald Trump was feeding on the ridiculous and absurd spin that has come from so much of the mass media in this country, conflating somehow the, quote, “antiestablishment” positions of Bernie Sanders and Donald Trump. As Bernie said in his speech last night, Donald Trump is antithetical to Bernie’s values and progressive values. And the fact is that unless we’re going to take on the need for democracy by challenging the power of Wall Street, then we are leaving open the door for the Donald Trumps of the world to just come right in and demagogue it out. The reality is that today, nobody who embraces the campaign of Bernie Sanders should do anything but try to defeat Donald Trump. And what Trump said last night to try to woo Bernie Sanders supporters, I think, will largely overwhelmingly be rejected, as it should be.

AMY GOODMAN: Very quickly—very quickly, Norman Solomon, your response to AP and NBC calling the Democratic nomination for Hillary Clinton on the eve of the largest primary in the United States, in your state, in California?

NORMAN SOLOMON: It really is an example of mass media genuflecting to elites within the Democratic Party—in this case, superdelegates. Those delegates were not elected for the purpose. Some of them are lobbyists for tobacco companies and so forth. And it’s a pattern where AP and NBC and the major media outlets, they have been clueless for more than a year about what the Bernie Sanders campaign is all about. They thought that progressives could not mount an effective presidential campaign. And I think it is de facto voter suppression, and more and more people are recognizing that kind of media manipulation as exactly that: efforts to manipulate.

AMY GOODMAN: I want to thank you, Norman Solomon, for joining us, a Bernie Sanders delegate, one of the founders of RootsAction.org. Among your books, War Made Easy: How Presidents and Pundits [Keep] Spinning Us to Death.

And, Dolores Huerta, I wanted to stay with you for one minute to talk to about Helen Chavez, the activist who played a crucial role in launching the United Farm Workers of America, who has just died at the age of 88, widow of Cesar Chavez, who, together with you, led the United Farm Workers of America for more than three decades. In a statement honoring Helen Chavez, President Obama said, quote, “She managed her union’s finances, prepared meals, marched in picket lines, and was even arrested for her actions, all because she believed in the dignity of America’s farmworkers—men and women she toiled with in the fields, even as she raised eight children and helped lead a movement.” Helen Chavez died Monday in Bakersfield, California. You knew her well, is that right?

DOLORES HUERTA: Yes, I did. Helen was a very dear, very close friend. We worked together for many years, even before we started the United Farm Workers, in the previous organization, the Community Service Organization. She was truly the foundation and the rock. And I don’t think Cesar would have been able to accomplish what he did without her emotional and her physical support that she gave, and not just to Cesar, but to everybody in the movement, the staff and volunteers, and worked diligently in our credit union. And I do want to say, though, that, hey, in California, we had a popular vote, where Hillary Clinton won that popular vote.

AMY GOODMAN: Well, I want to thank you for being with us, Dolores Huerta.

AMY GOODMAN: Dolores Huerta, thanks for joining us, civil rights activist, co-founder of the United Farm Workers of America with Cesar Chavez, president of the Dolores Huerta Foundation for community organizing, and a Hillary Clinton supporter.

This is Democracy Now! When we come back, we go to Stanford University to find out about the case of a man who was convicted of felony after felony around sexual assault, sentenced to six months in prison. Stay with us. 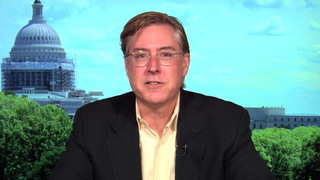