We dip into the Democracy Now! archive to revisit Election Day 2000, when Bill Clinton was calling radio stations to get out the vote for Hillary for Senate and Al Gore for president. He did not expect to spend 30 minutes defending his administration’s record on the death penalty, the Middle East and racial profiling, among other issues. But that is exactly what happened when he encountered Democracy Now! host Amy Goodman. At one point in the interview, Clinton accuses Goodman of being “hostile and combative.” The next day, the president’s aides threatened to ban Amy from the White House. Watch the full interview here.

AMY GOODMAN: We end today’s broadcast going back to, well, 16 years ago, when then-President Bill Clinton called in to radio stations in New York to get out to vote for Hillary for Senate in New York and Al Gore for president. Among the stations he called was WBAI in New York. He intended to spend two minutes, but WBAI host Gonzalo Aburto and I kept him on the phone for about half an hour. This is an excerpt of our conversation.

AMY GOODMAN: Mr. President, are you there?

PRESIDENT BILL CLINTON: I am. Can you hear me?

AMY GOODMAN: Yes, we can.

AMY GOODMAN: You’re calling radio stations to tell people to get out and vote. What do you say to people who feel that the two parties are bought by corporations and that they are—at this point feel that their vote doesn’t make a difference?

PRESIDENT BILL CLINTON: There’s not a shred of evidence to support that. That’s what I would say. It’s true that both parties have wealthy supporters. But let me offer you—let me just give you the differences. Let’s look at economic policy. First of all, if you look at the last eight years, look where America was eight years ago, and look where it is today. We have the strongest economy in history. And for the first time in 30 years, the incomes of average people and lower-income working people have gone up 15 percent after inflation. The lowest minority unemployment ever recorded, the highest minority home ownership, the highest minority business ownership in history—that’s our record.

AMY GOODMAN: President Clinton, U.N. figures show that up to 5,000 children a month die in Iraq because of the sanctions against Iraq.

PRESIDENT BILL CLINTON: That’s not true. That’s not true. And that’s not what they show. Let me just tell you something. Before the sanctions, the year before the Gulf War—you said this—how much money did Iraq earn from oil? Answer: $16 billion. How much money did Iraq earn last year from oil? How much money did they get, cash on the barrel head, to Saddam Hussein? Answer: $19 billion, that he can use exclusively for food, for medicine, to develop his country. He’s got more money now, $3 billion a year more, than he had nine years ago. If any child is without food or medicine or a roof over his or her head in Iraq, it’s because he is claiming the sanctions are doing it and sticking it to his own children.

AMY GOODMAN: The past two U.N. heads of the program in Iraq have quit, calling the U.S. policy—U.S.-U.N. policy “genocidal.” What is your response to that?

PRESIDENT BILL CLINTON: They’re wrong. They think that we should reward—Saddam Hussein says, “I’m going to starve my kids unless you let me buy nuclear weapons, chemical weapons and biological weapons. If you let me do everything I want to do, so I can get in a position to kill and intimidate people again, then I’ll stop starving my kids.” And so, we’re supposed to assume responsibility for his misconduct. That’s just not right.

AMY GOODMAN: Many people say that Ralph Nader is at the high percentage point he is in the polls because you’ve been responsible for taking the Democratic Party to the right. What do you say to listeners who are listening around the area right now—

AMY GOODMAN: —to allay their concerns?

PRESIDENT BILL CLINTON: I’m glad you ask that. That’s the last question I’ve got time for. I’ll be happy to answer that.

What is the measure of taking the Democratic Party to the right? That we cut the welfare rolls in half? That poverty is at a 20-year low? That child poverty has been cut by a third in our administration? That the incomes of average Americans have gone up 15 percent after inflation? That poverty among seniors has gone below 10 percent for the first time in American history? That we have the lowest African-American, the lowest Latino unemployment rate in the history of the country? That we have a 500 percent increase in the number of minority kids taking advanced placement tests? That the schools in this country, that the test scores among—since we’ve required all the schools to have basic standards, test scores among African Americans and other minorities have gone up steadily? Now, what—

AMY GOODMAN: Can I say what some people—

PRESIDENT BILL CLINTON: Let me—now, wait a minute. You started this, and every question you’ve asked has been hostile and combative. So you listen to my answer, will you do that?

PRESIDENT BILL CLINTON: Now, you just listen to me. You ask the questions, and I’m going to answer. You have asked questions in a hostile, combative and even disrespectful tone, but I—and you have never been able to combat the facts I have given you. Now, you listen to this.

AMY GOODMAN: That was Bill Clinton on Election Day in 2000 calling in to our radio station WBAI in New York. To hear the whole interview—it went on for over a half an hour—you can go to democracynow.org. That was 16 years ago, on Election Day 2000.

Tune in tonight on your local station or right here at democracynow.org. We’re bringing you a five-hour election night special, from 7:00 p.m. Eastern time to midnight, at least.

And a very happy birthday to Kieran Krug-Meadows. 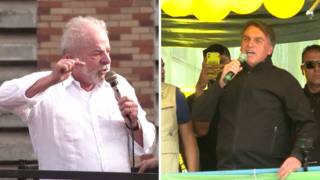