Cornel West: Unlike Bernie Sanders, I’m Not Convinced the Democratic Party Can Be Reformed

AMY GOODMAN: I want to turn to Bernie Sanders. We had the first extensive hour—

CORNEL WEST: I heard that. It was a wonderful dialogue.

AMY GOODMAN: —with Bernie after the election.

AMY GOODMAN: I spoke to him Monday night at the Free Library. We played it Tuesday. He spoke about how he hopes to reform the Democratic Party as the new chair. Well, it’s a new position called the outreach position. He’s now in the Senate Democratic leadership, even if he is an independent socialist. This is Bernie Sanders.

SEN. BERNIE SANDERS: The new approach, I think, is to, A, create a 50-state strategy. That means we start playing ball in states that the Democrats have conceded decades ago. But more importantly, we create a kind of grassroots party, where the most important people in the party are not just wealthy campaign contributors, but working people, young people, people in the middle class, who are going to come in and going to start telling us what their needs are and give us some ideas as to how we go forward. And I accept this responsibility as outreach chair with a lot of trepidation, but also with excitement. I’m going to be going around the country to try to do everything that I can to create a party which represents working people and not just the 1 percent.

AMY GOODMAN: So, a lot of questions here, and I encourage people to watch the full hour at democracynow.org. You were a big supporter of Bernie Sanders. You served on the Democratic platform committee on behalf of Bernie Sanders.

AMY GOODMAN: Do you think he’s right to work on reforming the Democrats rather than focus on building a new party? He is leading a movement called Our Revolution. He has said we have to work with Donald Trump in different ways, he says to the people who supported him. Elizabeth Warren, in the last day, has said she’s not so clear she’s going to be working with Donald Trump. I mean, very interesting, when Barack Obama came in, Mitch McConnell made it very clear they won’t work with Obama at all.

AMY GOODMAN: But what are your thoughts on all of this, the inside-outside strategy?

CORNEL WEST: Well, I think there’s going to be a lot of different responses. I have a deep love and respect for Brother Bernie Sanders. I always will. I don’t always agree with him. I’m not convinced that the Democratic Party can be reformed. I think it still has a kind of allegiance to a neoliberal orientation. It still has allegiance to Wall Street. The very victory of Nancy Pelosi is a sign that neoliberalism is still hegemonic in the party. I hope that Keith Ellison is able to present a challenge to it. But my hunch is—

AMY GOODMAN: As head of—if he makes it as head of the Democratic National Committee.

CORNEL WEST: If he’s head of the DNC. But my hunch is the Democratic Party has simply run out of gas. I mean, this was a party that couldn’t even publicly oppose TPP when we debated that in the platform committee. And that’s just one small example. Couldn’t stop—couldn’t vote to stop fracking and so on. So that it’s still so tied to big money.

AMY GOODMAN: Even though Hillary Clinton had changed her position because of the pressure of Bernie Sanders on TPP?

CORNEL WEST: Exactly, exactly, and right there in the debates. They got the word from the White House. “We didn’t want to embarrass the president.” Embarrass the president? What about the poor and working people who are dealing with the suffering? Is that less important than embarrassing the president? And they were very clear about that. And I pushed and pushed and pushed. Here’s somebody—they can’t even talk about the Israeli occupation honestly. The president uses a language in 2009; they can’t use it in the platform. Why? Because they’re tied to the lobby. They’re tied to AIPAC. So that when you have those kinds of restraints on you, these albatrosses around your neck, how are you going to be a party for the people? How are you going to be a party for working people, poor people? How are you going to be a party for those brothers and sisters in Yemen who are dealing with U.S.-supported troops and bombs killing them, mediated with the Saudi Arabian government? How are you going to deal with the Palestinians, deal with the Israeli occupation? How you going to deal with Africans, the expansion of AFRICOM and so forth? There has to be some integrity and moral consistency. And unfortunately, the Democratic Party just strikes me as not being able to meet that challenge. But I’ll work with Brother Bernie Sanders and others, both out of love and because I know in his heart he’s got a certain deep commitment to working people. But now, even as an independent socialist, he’s behaving as a New Deal liberal.

CORNEL WEST: That means that he is a—well, a Democratic socialist is a radical who’s critical of the system. A New Deal liberal works within the system and doesn’t want to bring massive critique for structural change. And I can understand it, because he’s inside. But those of us who are outside and free, we’re going to tell the truth. We’re going to be honest. We’re going to have a certain kind of moral and spiritual and intellectual integrity. And no matter how marginal that makes us, we’re not in any way going to become well adjusted to this injustice out here.

AMY GOODMAN: We’re going to break and then come back to what’s happened in North Carolina, and then you’re headed to North Dakota, so we’ll talk about that, as well. Dr. Cornel West, professor emeritus at Princeton University, he endorsed Bernie Sanders and served on the Democratic platform committee. This is Democracy Now! We’ll be back in a minute.

Cornel West on Keith Lamont Scott Case: Yet Again an Officer Gets Away with Killing a Black Man

NEXTCornel West on Keith Lamont Scott Case: Yet Again an Officer Gets Away with Killing a Black Man 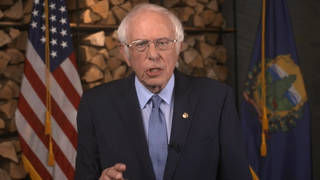