In Montana, a white supremacist website has issued a call for online attacks against the Jewish community in the town of Whitefish, where white supremacist Richard Spencer’s mother lives. The call listed the phone numbers and email addresses of Jewish residents. Richard Spencer says he’s considering running for Montana Congressmember Ryan Zinke’s U.S. House seat, if Zinke is confirmed to head the Interior Department. Trump picked Zinke for the Cabinet position last week. Meanwhile, Trump has picked Stephen Miller, who has close ties to Richard Spencer, to be a senior adviser in the White House. We speak to Rebecca Vilkomerson, executive director of Jewish Voice for Peace.

AMY GOODMAN: Which brings me to Montana, and I wanted to ask you this question, Rebecca. A white supremacist website has issued a call for violence against the Jewish community in the town of Whitefish, where white supremacist Richard Spencer’s mother lives. The call for violence includes listing the phone numbers and email addresses of Jewish residents. Richard Spencer says he’s considering running for Montana Congressman Ryan Zinke’s House of Representatives seat, if Zinke is confirmed to head the Interior Department. Trump picked him for the Cabinet position last week. Meanwhile, Trump has picked Stephen Miller, who has close ties to Richard Spencer, to be a senior adviser in the White House. Talk about white nationalism and what this means here in the United States.

REBECCA VILKOMERSON: Yeah, I mean, it’s been a real concern ever since Stephen Bannon became Trump’s campaign manager back in the summer. Now, of course, Bannon is in a very close proximity to Trump in the White House, or is going to be in very close proximity to Trump in the White House. And Bannon himself has called Breitbart, which he was managing, a platform for what he calls “alt-right,” but of course is just the forces of white nationalism, white supremacy, you know, open racism, misogyny, Islamophobia, anti-Semitism. And we can see how this has empowered anti-Semites in this country and how—that we’ve seen a spike in not only anti-Semitic incidents, but also, of course, on Islamophobic incidents, racist incidents, that sort of thing. And this incident in Whitefish is just the most recent manifestation of that.

And so, certainly for me, this is the closest proximity to power that I’ve seen anti-Semitism in the United States. I still feel much more concerned about the kind of Islamophobic and racist policies that Trump has openly said that he would pursue, but, of course, they all go together. And so I think we have, you know, a moment where, certainly in my lifetime, we’ve never seen this kind of forces come so close to power and to start to take power. And so, it is scary. And I think one of the things that’s so upsetting about the Anti-Semitism Awareness Act I spoke about a moment ago is that a lot of the mainstream Jewish institutions, like AIPAC and the Jewish Federations, they have not been speaking up about Bannon, they haven’t been speaking up about David Friedman and his reprehensible comments, and yet they’re willing to use this moment of elevated fears about anti-Semitism to push through these laws that aren’t just—aren’t really about white supremacist anti-Semitism, but about punishing people who are working for Palestinian rights.

AMY GOODMAN: How is Jewish—how is Jewish Voice for Peace organizing? None of this is set in stone. These are nominations. Today is Electoral College day.

REBECCA VILKOMERSON: That’s right, yeah. I mean, I think we, as part of a much broader collective movement, are determined to fight this on every front. And so, we worked very, very hard so that the House did not actually hear the Anti-Semitism Awareness Act. We’re going to be fighting very, very hard against David Friedman’s appointment, along with what I hope will be a broad range of organizations, Jewish and not. And I think all of us—you know, all of our—all of our movements, which are going to have to come together around these broad principles, are going to have to work together to fight this in every single way that we can.

AMY GOODMAN: I want to thank you for being with us, Rebecca Vilkomerson—

AMY GOODMAN: —who is head of Jewish Voice for Peace, and Mustafa Barghouti, joining us from France, head of the Palestinian National Initiative.

This is Democracy Now! When we come back, we go south and look at what happened in North Carolina. A legislative coup? Close to 40 people were arrested protesting the stripping of the incoming Democratic governor in North Carolina of much of his power. Stay with us. 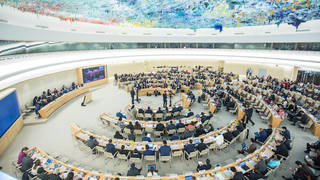